The bowler was Roger Telemachus. The batsman, Daryll Cullinan.

Calamari stopping a First-Class cricket match is not the commonest of incidents, but Paarl Cricket Ground witnessed exactly the same on February 6, 1995 in a Castle Cup match. Abhishek Mukherjee looks back at a greasy seafood interruption.

Dogs have stopped competitive cricket matches on several occasions. Peter the Cat (and his successor Sinbad) has attained legendary status in the annals of cricket. There have been other creatures interrupting matches, but it seems almost fantastic that calamari have been at it as well — that, too, fried ones. READ: 30 instances of cricket’s bitter-sweet affair with animals

The incident happened in a Castle Cup match at Paarl, where Boland were hosting Border. There was nothing extraordinary about the match. Guided by the curiously named Mugammad Salieg Nackerdien, Boland had reached 188 for 4 before there was a collapse, and they capitulated to a mere 228 on the second morning.

It seemed a competent score, though Michael Stonier and Frans Cronje (elder brother of Hansie) added 65 for the opening stand. Border were reduced to 143 for 6 before Steve Palframan and Ian Howell added 57. Border lost their last 4 wickets for 18, and Boland led by 10.

Unfortunately for Boland, the third afternoon belonged entirely to the Border bowlers — Brenden Fourie (3 for 20), Howell (2 for 31), and Peter Emslie (4 for 37). Once again Boland had a decent start, but lost their last 8 wickets for 37 and were bowled out for 110.

Border needed a mere 121, and though Stonier fell for 1, Cronje and Daryll Cullinan took the score to 61 for 1 at stumps. The fourth morning promised a quick, eventless end.

The Boland attack had some dignified names. Claude Henderson later played Tests and ODIs for South Africa, while Roger Telemachus played ODIs and T20Is. Another interesting part of the attack was a fast-medium bowler called Marais Erasmus, currently an international umpire.

With Cullinan at the crease, the match should ideally have not lasted a session. Exactly why the fans were frying calamari outside the boundary remains unknown, for carrying raw materials and equipment to the ground for a two-hour session does not seem an easy option.

Whatever the reason, the Paarl crowd was happy to witness the home side lose with their stomachs full of calamari. Unfortunately, Cullinan hit Telemachus for six, and the ball landed in a pan of fried calamari.

History is not exactly vocal on exactly what happened to the calamari, or what the “cook” had for a meal. Gripping a hot, greasy ball was beyond Telemachus’ scope. They allowed the ball to cool for ten minutes before umpires Alan Ball and Wilf Diedricks (was it the first time they had to check the temperature of the ball?) gave the green signal.

Unfortunately, the grease meant that Telemachus still found it difficult to grip the ball, and it had to be replaced after some deliberation. “Fried calamari stopped play” ran headline of the Wisden match report.

It did not take Cullinan much longer after that to finish things off. He outscored Cronje, leaving him stranded on 36 as he raced to 78. The calamari-stained shot remained the only six of the Border second innings. 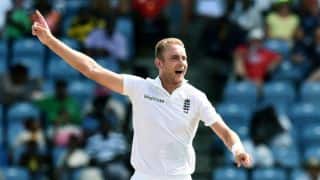 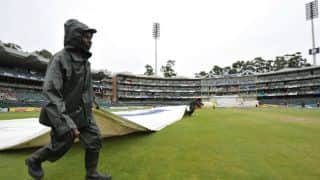