With the Sri Lankans managing to scrape past the West Indians in a rain marred ODI spread over two days, a pall of gloom hangs over the Indian cricket team dressing room: the men in blue find themselves in the thankless position of having to beat Sri Lanka in Tuesday's encounter so that they face them yet again in the finals. 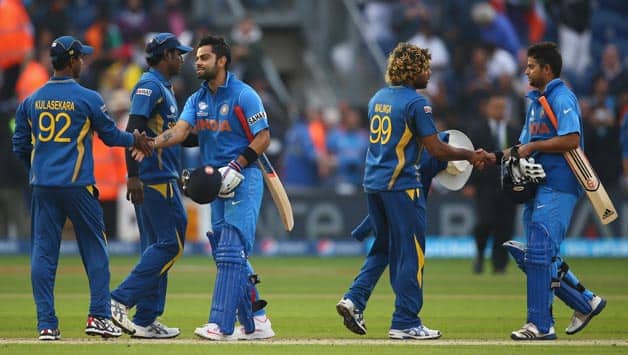 With the Sri Lankans managing to scrape past the West Indians in a rain marred ODI spread over two days, a pall of gloom hangs over the Indian cricket team dressing room: the men in blue find themselves in the thankless position of having to beat Sri Lanka in Tuesday’s encounter so that they face them yet again in the finals.

“This is one of the most testing periods of my captaincy, man,” moaned stand-in-skipper, Kohli. “How the hell am I supposed to tell my boys to up their game knowing that would imply having to play those Lankans yet again for the gazillionth time? They tell me even a call center job is more exciting than playing or watching an India-Sri Lanka ODI match. B@#$@#$ M#@#$@#$,” he sputtered. The pugnacious Delhi lad is half hoping that if not for rain, the match gets cancelled due to boredom, elimination from the tournament notwithstanding.

The only cricketers more pissed than the Indians seem to be the Sri Lankan cricketers. “At least other teams play us some of the time but we have to experience us playing others all the time, man. Even I get bored when I put on yet another annoying, sleep inducing 100 run partnership with Mahela,” wailed Sangakara, banging his head against the wall in his hotel roon.

If you think cricketers are going through some testing times, then spare a though for cricket journalists, especially those based in the subcontinent, who have to cover Sri Lanka ODI cricket for the third day running. The situation is so fraught that the text commentary association, a labour union that caters to the interests of professional ball by ball text commentators and sundry cricket geeks, has threatened to boycott Tuesday’s match in Port of Spain.

“We would rather cover Fiji Under 19s vs Samoa Under 19s taking place somewhere in the Pacific Ocean than another Sri Lanka match, man,” wailed Rahul Ponga, president of the association. “Every profession has a downside – Bollywood stars cavorting in embarrassing ways in front of the cameras, national reporters obliged to cover a Dr. Manmohan Singh speech, film critics required to review a RGV movie. In case of cricket journalism, it happens to be covering an India-Sri Lanka ODI match,” he added.

The Ministry of Labour has stepped in to break the logjam between cricket portals and their text commentators. “It would be inhuman and in violation of the UN charter on human rights to subject commentators to the excruciating experience of putting a night-out to cover a match involving Sri Lanka for the third consecutive day,” said Sis Ram Ola, the honourable Minister for Labour and Employment.

So as compromise, text commentary for today’s match will conform to the following format:

0.1   Tharanga or whoever to… yawn… are you really interested?

And this will be copy pasted for the remaining overs.