Cricketers like Virat Kohli, Rohit Sharma, Zaheer Khan, Suresh Raina, Ravindra Jadeja, Ishant Sharma and many more have one thing common: the words I am before their Twitter handles.

Social media websites are the mean (and medium and mode as well) for cricketers to connect with their friends and fans. It is interesting how cricket has transcended over the years on radio, television, print and the internet. However, social media rules the roost in today s time and age. Almost every cricketer is on Twitter or Instagram today. But ever taken an effort to understand the mystery behind their Twitter handles? Cricketers like Virat Kohli, Rohit Sharma, Zaheer Khan, Suresh Raina, Ravindra Jadeja, Ishant Sharma and many more have one thing common in their Twitter handles: the words I am before the handles. However, some have opted out from the trend of I am and chosen a different approach. Is it superstition or lucky number or some strange logic behind these cricketers Twitter handles? Let us dissect the meaning:

Ravichandran Ashwin (@ashwinravi99): Why 99? Well, Ashwin s favourite number is 9. Not just that, his roll number in school was also 9. However, to his dismay, Parthiv Patel had already taken the number 9 jersey. So the number 99 can be found not just behind his jersey but also on his Twitter handle.

Shikhar Dhawan (@SDhawan25): The Gabbar of Indian cricket team s liking to the number 25 was courtesy his daughter s birth date. In fact, the number 25 has been his family s lucky number as well (I have no clue what that means). So that s how number 25 is attributed to his Twitter handle.

KL Rahul (@klrahul11): Rahul had made his international presence felt much before 2016. He played his first Test against Australia in 2014 in Melbourne. However, his ODI debut turned out to be more significant to him, probably because he was the first Indian to score a hundred on ODI debut. And all that happened on June 11, 2016. So that s why the number 11 appears on his Twitter handle.

Anil Kumble (@anilkumble1074): Kumble was obviously the second bowler in the history of Test cricket to claim all 10 wickets of an innings after Jim Laker. Kumble took 10 for 74 at Feroz Shah Kotla to hand India their first win against Pakistan in 19 years (my editor forced me to write this obvious bit despite everyone knowing). That sums up the secrecy behind 1074.

VVS Laxman (@VVSLaxman281): In 2001, Laxman dismantled the Australian attack by scoring 281 at Kolkata (if you are wondering why I am stating obvious facts, check the above entry for Kumble). A panel of writers, authors, historians and broadcasters selected Laxman s 281 as innings of the 21st century.

Nathan Lyon (@NathLyon481): Lyon, who ended up as the leading wicket-taker in Test cricket in 2017, has kept the numbering in his Twitter handle simple: he is Australia s Test cap #481.

Shoaib Akhtar (@shoaib100mph): Akhtar had become the first to break the 100-mile barrier in cricket, in the 2003 World Cup at Newlands. The last ball of his second over was recorded 100.2 mph.

David Warner (@davidwarner31): When Warner entered the Australian limited-overs set-up, he wanted to opt for 7 and 21. However, since both the numbers were unavailable he went for 31 (as answered by the cricketer during a Q&A section with the Indian fans at the time of IPL 2017). It remains a serious mystery as to why Warner chose for 31. If you get to know the answer, please inform us as well. 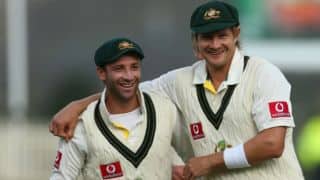