The Dhoni-Sehwag rift may have been true or blown out of proportion by the media. However, far from being unique, discords such as this have been commonplace in the history of the game. In this series, Arunabha Sengupta looks at some of the most famous feuds of cricket. 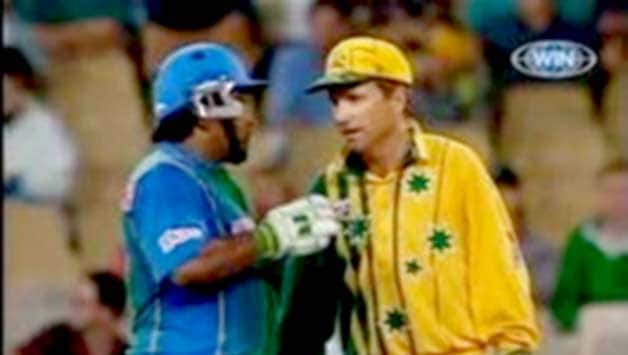 Navjot Singh Sidhu (left) packed his bags and left midway through the tour of England, alleging that he could not take the abuses and insult any longer of captain Mohammad Azharuddin © Getty Images

The Dhoni-Sehwag rift may have been true or blown out of proportion by the media. However, far from being unique, discords such as this have been commonplace in the history of the game. In this series, Arunabha Sengupta looks at some of the most famous feuds of cricket.

One could almost hear the ring announcer introducing the fighters in the two corners. It was the clash of two heavyweights, and not simply because of their gigantic achievements.

True, the feats of the two were phenomenal. One was the champion leg spinner of his era –indeed one of the very best of all time. The other led his country from a shaky start to the very top of the world.

However, both were graced with generous builds, which led them to be the butt of many cruel taunts on the field.

When Arjuna Ranatunga asked for a runner on a particularly hot day in Sydney, Ian Healy’s legendary comment was heard worldwide through the stump microphone, “You don’t get a runner for being an overweight, unfit, fat c**t.”

Ranatunga was offended enough to instruct his players not to shake hands with the Australians after the match.

Although united by this weighty cause, the two rivals did not see eye to eye. The problems started with Sri Lanka’s visit to Australia in 1995-96 – a tour full of problems at every step. The visitors did not really get a rousing welcome, with sniffer dogs getting extremely interested in them at the airport. This was followed by the infamous Darrell Hair calling Muttiah Muralitharan for throwing. When Ranatunga, the captain of the Lankans, hinted at conspiracy by the Australians against his champion spinner, the home team was not amused. The friction continued for years. It was aided and abetted by Ranatunga’s uncanny ability to rattle a team of world-renowned sledgers, with Warne being the prime victim. During the 1996 World Cup, the rotund Sri Lankan captain went on record saying that Warne was overrated. Eager to settle things on the ground, Warne tried to bowl him a flipper in the World Cup final, but it came out of his hand as a juicy full toss. Ranatunga pulled it for six and stuck his tongue out at the fuming leg-spinner. Warne also dropped the left-hander off his own bowling as the Lankans romped to a win in the final.

In a One-Day International (ODI) between Sri Lanka and England at Adelaide, 1998-99, umpire Ross Emerson called Muralitharan for throwing. Ranatunga not only objected, but according to Warne, also tried to tell the umpire where to stand when the off-spinner was in operation. Warne, in My Autobiography, says that he found it disgraceful and was surprised that the International Cricket Council (ICC) did not find it offensive enough to fine the Sri Lankan captain.

During the 1999 World Cup, the leg-spinner wrote in his column that Ranatunga was a disgrace and Sri Lanka and the game would be better off without him. He added, “I don’t like him, and I’m not in a club of one.”

While this was supposedly provoked by Ranatunga’s threat of legal action against the ICC, but unfortunately it was the selfsame governing body that suspended Warne for a match and deducted half his match fees for the statement.

In the press conference after Sri Lanka’s first match of the tournament, Ranatunga retaliated by referring to the Australian cultural heritage and mocking the country as a convict settlement. Warne wrote that he was surprised to see the Sri Lankan get away with it.

After retirement, Ranatunga’s ample form was rapidly appended by several additional ample layers, perhaps good enough to pitch fork him to a different weight category – but the bout continued. Warne, seeing him in 2005, remarked that he looked as if he had swallowed a sheep. Ranatunga, aware of the ban on that Warne faced for taking an illegal substance, shot back, “It is better to swallow a sheep or a goat than swallow what he has been swallowing.”

However, there was grudging admiration between the two. Ranatunga confessed, “I, however, respect Warne as a player. He is great.”

Warne, on his part, included Ranatunga in his list of greatest players in the 2008 book Shane Warne’s Century remarking, “You can’t be mates with everyone, and if there was any way I could knock him down to number for the purposes of this book, I’d be delighted to do so. But having taken on the task, I want to do it seriously, and the fact is that Ranatunga helped to put Sri Lanka on the cricket map. And you know what? Deep down, I’ll quietly admit that I rated him as a cricketer.” The next major conflict was not a long lasting one. In fact, it was a spur of the moment affair, hardly extending to the next over – let alone years as most of the other feuds of this series.

However, it merits a mention because of the dramatic element associated with it. Even Warne certified it saying that it was the ugliest incident on the cricket field he had witnessed, exceeding anything involving Ranatunga.

It was at the Queen’s Park Oval, 1995. West Indies, not beaten in a series for 16 years, was in the unaccustomed position of being one match down. Curtly Ambrose had not been among the wickets for the first two Tests. And here, he was greeted by a carpet of green.

After Richie Richardson had won the toss and put the Aussies in, Courtney Walsh had snared out Michael Slater, and Ambrose had got rid of Mark Taylor and Mark Waugh. Steve Waugh walked in at 14 for three, with the giant fast bowler breathing fire.

After peppering Waugh with a barrage of short balls, Ambrose, according to Waugh’s West Indian Tour Diary, “followed through to within two metres away from me and gave me the regulation Clint Eastwood stare. I thought he went on with the silent assassin-style interrogation for longer (than) was necessary, so I came back with, ‘What the f— are you looking at?'”

Ambrose was stunned beyond belief. As Waugh puts it, “No one had ever been stupid enough” to speak to him like that. The big fast bowler came closer to him and said, “Don’t cuss me, maan.”

Waugh writes, “His eyeballs were spinning and as he edged to within a metre, it seemed he was ready to erupt. At this point, I gave him a short but sweet reply that went down about as well as an anti-malaria tablet. Fortunately, Richie Richardson moved in swiftly to avert what could have been my death by strangulation, and the game continued.”

As the dramatic video clips and photographs show, Richardson was forced to physically remove Ambrose from the fray.

What was the short sweet response that Waugh speaks about? In Out of my Comfort Zone, Waugh lifted the lid on the last fuzzy bit about the incident, writing, “Unfortunately, nothing inventive or witty came to mind, rather another piece of personal abuse: ‘Why don’t you go and get f***ed?'”

Richardson recalls, “It probably looked as if it could have been serious, but I don’t think it would have been. I said to Curtly, ‘Come, don’t waste my time, let’s get on with the job. Our job is to get him out.’

When asked about the possibility of an actual physical confrontation, Richardson played it down, saying, “No, no, no. It never would have happened. Both guys are serious competitors and they are also professional, and there’s no way they would have brought the game into disrepute.”

The next two balls were about as fast as Ambrose has ever bowled.

The incident seemed to spur both the champions to great feats in the innings. Ambrose captured 5 for 45 to skittle out the Australians for 128, but Waugh remained unbeaten on a heroic 63. 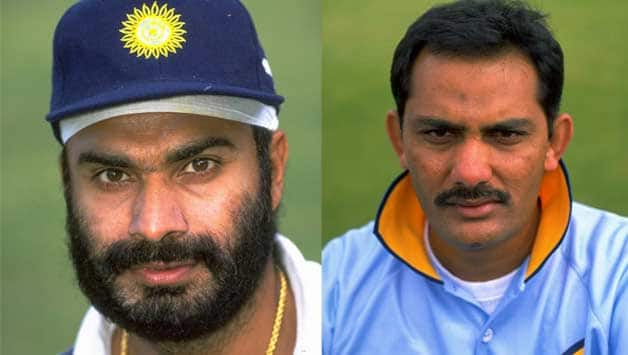 Navjot Singh Sidhu (left) packed his bags and left midway through the tour of England, alleging that he could not take the abuses and insult any longer of captain Mohammad Azharuddin (right) © Getty Images

I won’t play with you any more

Sixty years after Lala Amarnath was infamously sent back from the Blighty , Navjot Singh Sidhu left the English tour in similarly sensational circumstances.

On the day of the third ODI in Old Trafford, Sidhu discovered that he would not be playing in embarrassing circumstances.

Neither Mohammad Azharuddin, the captain, nor Sandeep Patil, the manager, had informed him that he was not in the team. Yet, some of the members of the team had got to know about his omission from the team sheet pinned up in the dressing room.

As Azharuddin won the toss and signalled from the middle that India would bat, the Sikh opener started padding up. The rest of the team could not control the snickers, and some even let fly one or two Sardarji jokes. Sidhu, by then 33 and a veteran of 36 Tests, felt extremely insulted.

Even the efforts of the Board President Inderjit Singh Bindra could not persuade him to carry on with the tour. As he left, he made a dramatic declaration, “I promised my father that I would live my life with respect and dignity. As long as I stay on this tour I cannot do that.”

Sidhu was particularly incensed that Azharuddin himself joined the team in laughing at the sight of the unfortunate batsman in his pads. R. Mohan, the correspondent of The Hindu, remembers that Sidhu had told him, “The captain dropped me, then laughed, that f***er.”

While Sidhu was quite openly critical of Azharuddin’s attitude, the captain himself told the media, “the game is greater than the player and nobody should behave like schoolboys.”

Five months later, however, Sidhu was back in the team, playing against South Africa at Rajkot.

A decade and a half down the line, Jayawant Lele revealed in his autobiography, I Was There – Memoirs of a Cricket Administrator, that much of the misunderstanding between Azhar and Sidhu had been caused by the cultural and linguistic differences.

According to Lele, Mohinder Amarnath had been appointed to speak to Sidhu about the circumstances of his leaving the tour. When asked, Sidhu had alleged that the captain continuously abused him during the tour. On hearing the exact epithets used, Amarnath discovered to his amusement that commonplace Hyderabadi slangs, often used as terms of endearment, had been translated to their literal North Indian versions by the opening batsman. Hence, predominantly friendly address had been mistaken as foulmouthed abuse.