In this episode, we take a look at the intrigue and drama surrounding the English cricketers of 1955 and umpire Idrees Baig.

The Dhoni-Sehwag rift may have been true or blown out of proportion by the media. However, far from being unique, discords such as this have been commonplace in the history of the game. In this series, Arunabha Sengupta looks at some of the most famous feuds of cricket. In this episode he looks at the intrigue and drama surrounding the English cricketers of 1955 and umpire Idrees Baig.

Somehow, when cricketers of England and Pakistan face off and an official is thrown into the fray, it makes for high-voltage sparks.

We have already looked at the infamous finger wagging brawl between Mike Gatting and Shakoor Rana. The stubborn decision of Darrell Hair to award the match in favour of England, when Inzamam ul Haq and his team refused to take the field in protest against ball tampering allegations, remains one of the most notorious in the history of the game.

However, neither of these incidents had the cloak-and-dagger drama, suspense, international intrigue and even a dash of comic relief as the curious affair between Idrees Baig and the MCC tourists of 1955-56.

It happened one night at Peshawar, and added gallons of fuel to a tour scarred with acrimony.

The true indication of a good umpire is to melt into the scene, not stick out like a sore thumb – or a wrongly-lifted index finger. However, Idrees Baig, the ‘premier’ umpire of Pakistan in the 1950s, strutted around the arena as if it was a stage for his one-act performance.

Noted cricket commentator Omar Kureishi recounts, “If the crowd got rowdy, he would admonish it. He would walk up to the rowdy section, with measured rather than hurried steps. More often than not, he would be hooted down and then he would sue for peace and implore the crowd to behave itself. He would succeed in pacifying it and then walk back with the same measured steps.”

He was also known to be a ‘patriotic umpire’. Kureishi recalls, “Even our own public considered Idrees Baig to be (Abdul Hafeez) Kardar’s secret weapon. My mother, who knew nothing about cricket … used to listen to the cricket commentary and could tell from my voice whether Pakistan was faring well or poorly. One day, Pakistan had had a pretty rough time in the field. Kardar dropped in that evening. My mother cornered him and wanted to know why Idrees Baig had played so badly! Kardar went crimson.”

Lala Amarnath loved to recount the tale of his evening with the Pakistan captain when he was managing the Indian team in 1954. Having accepted Kardar’s invitation for a cup of tea, Amarnath occupied a sofa with his back to the door.

“After a while, someone knocked on the door, entered and wished Kardar. He then said, ‘Any instructions for tomorrow’s game, skipper?’ I turned to see who it was. It was Idrees Baig, one of the umpires named for the final Test in Karachi! ‘What kind of instructions do you want?’ I said. Seeing me, Baig rushed out, but the great plan to defeat India had been revealed. I looked at Kardar, who was visibly shaken. I bid him farewell and returned.”

When Amarnath protested to the Pakistan Cricket Board, Masood Salauddin, a selector of the Pakistan cricket team and the only available qualified umpire, officiated in the Test match with mutual agreement. It remains the only instance of a selector doubling up as an umpire for a home Test.

You’ll never get me

When Donald Carr and his men — including the likes of Ken Barrington, Brian Close, Fred Titmus, Jim Parks and Tony Lock — landed in Pakistan for an unofficial ‘Test’ series in 1955-56, the first few days were peaceful enough. At a dinner, Carr had somehow upset Pakistan skipper Kardar by recalling their light hearted times together at Oxford, but that seemed to be a minor hiccup.

However, once the ‘Tests’ started, the tourists found themselves at the wrong end of the index finger of Idrees Baig in every encounter.

The umpire rubbed them the wrong way in the second ‘Test’ at Dacca where the home team inflicted an innings defeat. In those days, home advantage tended to budget for home umpires, and perhaps because of this the mood remained affable.

During the Dacca match, Idrees Baig had walked past one of the player’s bedrooms just as former England wicketkeeper George Duckworth was being doused with water. Idrees Baig chuckled and Carr called out jovially: “We’ll get you too, before the end of the tour.”

Idrees Baig grinned and replied, “You’ll never get me.”

With rifles in the Khyber Pass

While Lala Amarnath, a classic raconteur, may have garnished the tale of Kardar and Idrees Baig with tasty embellishments of his own, Shujauddin Butt had no such reputation. A left-arm spinner and a capable lower order batsman, this is how he recounted the third ‘Test’ at Peshawar: “…it was during the course of this match that a number of umpiring decisions were given some of which were questioned justifiably by the visitors… (including) a couple of rank bad lbw decisions against the tourists given by Idrees Baig.”

It is not known whether the umpire always asked for instructions from the captain, but in the Peshawar game, Kardar took 11 wickets, of which four were declared lbw by Baig.

In the final over of the third day, he also turned down a vociferous appeal by Tony Lock which left the bowler fuming. In Stephen Clarke’s fascinating book At the Heart of English Cricket, tour manager Geoffrey Howard recalled: “Things have been made too easy by some really shocking umpiring. It’s a pity that they allow these incompetents to do it — they are without doubt there to help the home side – because they are quite strong enough to at least avoid being beaten by us without this aid.”

That night there was a banquet. With Pakistan needing just 18 to win with 8 wickets in hand, the MCC players decided to enjoy themselves. During the function, senior professional Alan Watkins remarked that the next Test should be played in the Khyber Pass with rifles.

Kureishi writes, “Alas! He was ignorant of history too for the British would have had their butt kicked.”

During the party, the news reached the party of Kardar and company that Baig had been ‘abducted’ by the MCC players. The team had forcibly taken Baig in a tonga from the Services Hotel where the umpire was staying to Dean’s Hotel where MCC had been put up.

When Baig was discovered in a drenched and dishevelled state, he stated that six or seven MCC players, who appeared to be in high spirits brought about by beer, came into his room brandishing water-pistols, dragged him into one of the tongas, took him to their hotel and roughed him up. Kardar was so livid that he went to Carr’s room and told him that he and his team should pack their bags as the tour was over.

By the next day, an international situation was brewing. Telegrams were dispatched to Lord’s and extra troops called in to Peshawar to check public reaction. Baig turned up to face the press with his arm in a sling – a supposed result of being roughed up by the Englishmen.

Kureishi writes, “I can’t help feeling that he started to enjoy all the attention he was getting … He put one of his hands in a sling and when he got bored with that, he changed hands. It is not given to every umpire to feature in Time magazine, but there he was on its pages in a story that poked much fun at the expense of the MCC.”

MCC president, Lord Alexander of Tunis, telephoned the Governor-General, telling him “to offer to cancel the remainder of the tour and recall the team forthwith if this would be in the best interests of restoring friendly relations”.

The Governor-General counselled against it and the tour continued. Carr, although he had absolutely nothing to do with the incident, felt that, as captain, he should do the decent thing and take full responsibility.  Howard managed the situation with skill, diffusing the flames with an unconditional, profuse apology to Baig. It seemed to do the trick. Peace, if not harmony, was restored, and Idrees Baig stood in the final ‘Test’.

Kureishi downplayed the incident as ‘horseplay that got out of hand’.

On day three of the fourth ‘Test’, sparks flew once again. Jim Parks was given out caught off what seemed to be a half volley, and remonstrations followed from the non-striker Titmus. Later, a loud leg-before appeal against Imtiaz Ahmed was turned down. Imtiaz pulled away before the next delivery and asked the umpire to stop Watkins, at short leg, from swearing.

At the end of the tour Pakistan’s President, Iskandar Mirza, also got involved. Howard and Kardar were summoned to the Presidential quarters and asked about the tour.

In At the Heart of English Cricket, Chalke writes: “He listened carefully to what the two had to say. From the England perspective there had been a catalogue of bad umpiring decisions in each of the representative matches, almost all of them at their expense. From the Pakistan side the umpires had done their best and the tourists had shown insufficient respect in querying the decisions and in subjecting Idrees Baig to a soaking … Mirza (said), “Having listened to what you had to say … I have to say that I form the view that Idrees Baig, as an umpire, is a cheat.”

“But he is the best we’ve got,” Hafeez protested.

“The best umpire? Or the best cheat?” Mirza asked.

Back in England, MCC held Carr as the one responsible for not being able to control his team, but no real action was taken against him.

Titmus recalls that a special tie was made in the honour of Baig, showing a raised index finger with IB printed underneath, but no one was seen wearing it.

With time, though, both sides seem to have discovered the lighter side.

In 1970 Carr was managing an international cricket team while raising funds in Pakistan when he ran into Idrees Baig during one of the matches and the two embraced warmly.

As the pair ambled out of the changing room, Carr felt a tap on the shoulder. One of the players held out a bucket of water and said: “Would this help?”

(Arunabha Sengupta is a cricket historian and Chief Cricket Writer at CricketCountry. He writes about the history and the romance of the game, punctuated often by opinions about modern day cricket, while his post-graduate degree in statistics peeps through in occasional analytical pieces. The author of three novels, he can be followed on Twitter @senantix) 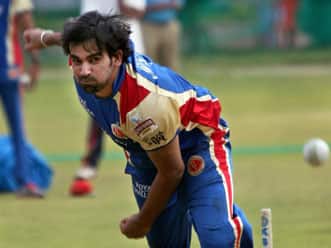