On Monday, Dale Steyn announced his retirement from Test cricket at the age of 36.

His body, struggling to cope with a series of injuries – the latest one ending his World Cup campaign before he could bowl a ball – forced Steyn to quit the five-day format in order to serve South Africa in limited-overs cricket.

He ended his career with 439 Test wickets an an average of 22.95 and strike-rate of 42.3. No South African bowler took more wickets in Test cricket.

As Steyn bids farewell to Tests, here’s at five of unforgettable bowling performances.

After a run fest on a flat Chennai surface, the second Test in Ahmedabad threw up a controversially spicy pitch and Steyn was at the forefront of a demolition job.

India were bowled out for 76 on the opening overs inside 20 overs, with Steyn ransacking them with 5/23 on a green top. His first spell set the tone, with the bowled dismissal of Rahul Dravid one for the ages. The rest were made to poke and prod at Steyn, who laid the foundations of South Africa’s massive victory.

Starring in South Africa’s series-clinching first victory on Australian soil was Steyn who took ten wickets and scored a vital 76.

His five wickets in Australia’s first innings helped keep the hosts to 394, and then he helped revive the innings from 251/8 with JP Duminy (166) to 459. Spurred by his batting, Steyn nipped out four of Australia’s top six batsmen to end with ten wickets in the match. Set a target of 183, South Africa pulled off a memorable maiden series victory in Australia.

The second day at The Wanderers saw Steyn take six wickets for eight runs in 8.1 overs as Pakistan fell to a new low of 49 all out, surpassing their 53 against Australia at Sharjah a decade earlier. It took Steyn five balls to find Mohammad Hafeez’s edge and soon after that the debutant Nasir Jamshed was beaten for pace and given out lbw.

Younis Khan lasted five balls before edging Steyn to first slip for 0. Steyn finished the session with 3/8 and returned after lunch to record his 20th five-wicket haul, which was his second-best performance in Tests and second-best by a South African versus Pakistan.

In Pakistan’s second innings, Steyn confounded the batsmen during an 11-over spell of blistering pace and swing to finish the Test with figures of 11/60 in a 211-run victory.

Here, Steyn’s traditional skills with the new ball weren’t required as much; it was the way he used the old ball throughout the game that helped South Africa bowl out the Sri Lankans twice in the match. Each time the game looked like petering out into a draw, Steyn conjured up a special delivery on the final day. That Imran Tahir went wicketless in the second innings only enhanced the reputation of Steyn, who showcased his expertise with the old ball.

South Africa went on to complete a famous series victory, and had Steyn to thank for. 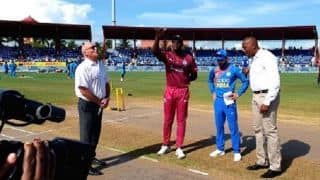