A backbone of South African cricket after their return to international cricket, Dave Richardson played 42 Tests and 122 ODIs with reasonable success.

A backbone of South African cricket after their return to international cricket, David John Dave Richardson, born September 16, 1959, played 42 Tests and 122 ODIs with reasonable success. Had it not been for Ian Healy, Richardson would probably been remembered as the best wicketkeeper of the early 1990s. Abhishek Mukherjee lists 10 facts about a champion wicketkeeper who went on to become CEO of ICC.

It does not end there: Dave s son Michael is making giant strides, though his career oscillates between Durham and Colombo CC; Matthew, Michael s cousin (but not son of Ralph) has played for Border and is a nephew of Mark Rushmere, who faced South Africa s first ball after their comeback to Test cricket. Richardson also played that Test.

2. A Ray of hope: Ray Jennings was South Africa s wicketkeeper of choice in the 1980s. Richardson made an appearance against the West Indian rebels of 1983-84, but he finally replaced Jennings against Kim Hughes side of 1986-87. He scored 28 and 33, held 6 catches, and never looked back. Five years later he kept wickets for South Africa in their comeback ODI against India at Eden Gardens.

It took Richardson 33 Tests to effect his first stumping (Venkatesh Prasad, off Paul Adams). He had snaffled 119 catches by then (which was a world record). He also stumped Greg Blewett off Pat Symcox in his 40th Test.

4. Stumping trivia II: Due to his skewed catches-stumping ratio, Richardson holds the strange record fewest Test stumpings for any wicketkeeper with 150 or more catches. Jeff Dujon (5 stumpings to 265 catches) comes next.

Note: Richardson s ratio is unusually skewed. The next person on the list of catches with 2 Test stumpings in his career is Courtney Browne (79 catches).

5. Duracell man: Since South Africa s readmission, Richardson, Donald, and Andrew Hudson played their first 16 Tests. Hudson missed the 17th, against England at The Oval in 1994, while Donald missed the 18th, against New Zealand at New Wanderers. Richardson, thus, had the longest uninterrupted career among them.

In fact, Richardson played the first 38 Tests for them since readmission. After Boucher s debut (at Sheikhupura in 1997-98) he played 4 more Tests.

6. Ward s ward: Playing against Pakistan at New Wanderers in 1994-95, Richardson registered a king s pair: he was bowled by Aamer Nazir and trapped LBW by Aaqib Javed for golden ducks. In the process he became only the fifth wicketkeeper to score a king s pair, the others being Tommy Ward, Ken James, Ian Colquhoun, and Artie Dick. Adam Gilchrist joined the list in 2001. Interestingly, all six men are from the Southern Hemisphere.

Note: The list may not be exhaustive, as ball-by-ball details are not necessarily available for earlier Tests.

7. That elusive World Cup: South Africa s exit in World Cup 1992 (of 22-runs-in-1-ball fame) broke thousands of hearts back home. Richardson stood helplessly at the other end as a frustrated McMillan tossed his bat in the air in exasperation.

Richardson never got a second chance. Keeping wickets against England at East London just before World Cup 1996, Richardson held two catches before fracturing a finger. He was ruled out for three weeks. Steve Palframan took over in the ODI that followed, continued in the World Cup, and never played again. Richardson s case was the perfect example of poor timing.

8. Glove-Man of the series: Back in the 1990s, being competent with the gloves often sufficed to guarantee a spot. As a result, Man of the Match or Series Awards seldom went to wicketkeepers. Richardson scored 247 at 82.33 and took 16 catches against New Zealand in 1994-95, and became the first non-English wicketkeeper to win a Man of the Series award.

Note: The Englishmen named Man of the Series before Richardson were Alan Knott (vs West Indies, 1969), Bob Taylor (vs New Zealand, 1978), and Jack Russell (Ashes 1989, shared with Terry Alderman).

9. No such luck in ODIs… For the same reason as above, wicketkeepers winning Man of the Match Awards was not a common phenomenon in the earlier days of ODIs. In fact, with 122 ODIs, Richardson is placed third on the list of most ODIs without being named Man of the Match even once. The first two names on the list are Nayan Mongia (156) and Khaled Mashud (126).

10. The summit of ICC: A lawyer by qualification, Richardson was a Business Director at Octagon South Africa. His job description involved negotiating on behalf of South African cricketers with their board. He became ICC s first General Manager in 2002; ten years later he became the CEO, and was elected Honorary Life Member of MCC. 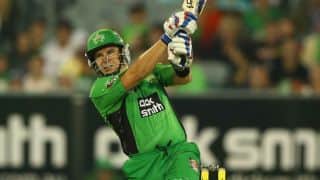