Boon is now an ICC Match Referee since 2011.

David Boon, born on December 29, 1960, was an Australian opening batsman who is now a match referee. Boon played 107 Tests and 181 One-Day Internationals (ODIs) for Australia from the 1980s to the mid-90s. Nishad Pai Vaidya picks 14 things to know about Boon.

Boon was born in the Tasmanian town of Launceston. His father Clarrie worked in a news agency and had been a sports administrator. His mother Lesley was an Australian women’s hockey player.

When Boon was 10 years old, his talent was recognised by Jack Simmons, who was an all-rounder with Lancashire. Simmons spotted Boon when he was around in Launceston coaching.

In December 1978, Boon became one of the youngest to represent Tasmania when he made his debut for them at the age of 17. Interestingly, his mentor Simmons was his captain for the game.

Boon made his Test debut against West Indies in Brisbane in 1984-85. In the second innings, he scored a gutsy 51 against a formidable attack to get going in Test cricket.

6. Part of the first 200-run opening stand in ODIs

In an ODI against India in Jaipur in 1986, Boon and Geoff Marsh put up a 212-run partnership for the first wicket. Both of them managed centuries. This was the first time ODIs had seen both openers get tons. The double-century stand for the opening partnership was also for the very first time.

Boon was in magnificent form during the 1987 World Cup. He stepped up to the task during the semi-final and the final to help Australia win their first World Cup. In the final against England at the Eden Gardens, he scored 75 and was named the Man of the Match.

8. 52 cans of beer on a flight from Australia to England

Legend has it that Boon drank 52 cans of beer while on a flight to England for the 1989 Ashes. He is said to have broken Doug Walters’ record of 44. In his book Out of My Comfort Zone, Steve Waugh wrote, “Boonie, after drowning 52 cans of beer, didn’t appear to be in too bad a shape… until he tried to walk. Thankfully, Geoff Marsh realised his great mate’s predicament and grabbed his arm and, Weekend at Bernie’s style, escorted him through customs and onto our bus to begin a recuperation that included a couple of days of sleep.”

9. First Tasmanian to score a Test ton in Hobart

In 1993, Boon hit 106 against New Zealand at Bellerive Oval, Hobart. He thus became the first Tasmanian to score a Test ton at the island’s only Test venue.

During the tour to the West Indies in 1995, Boon played his 100th Test. He became only the second Australian to achieve the milestone after Allan Border.

11. Underneath the Southern Cross

Boon was the man who led the Australian team during their victory song Underneath the Southern Cross. He held the honour until his retirement and then passed it down to Ian Healy.

When Boon announced his intentions to quit First-Class cricket, Tasmania’s Cricket Association announced a David Boon Day. This was the last day’s play of Tasmania’s game against New South Wales. Everyone was allowed free entry. Also, in his hometown of Launceston, one of the pavilion’s at the main cricket ground was named David Boon Stand. He had been given that honour when he was only 31 and while still a part of the Australian team.

The famous beer company VB, had made Boon “their face” in the 2000s. They also released talking dolls in his shape. Ian Botham was also accorded a similar honour and their combo was called Boony and Beefy.

Boon is now an ICC Match Referee since 2011. Over the years, he has been a selector in Australia but moved into a role on the world stage a few years ago. 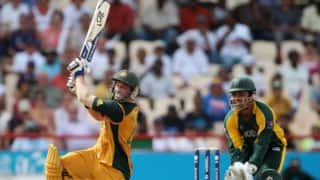