David Boon played a key role in four of Australia’s Ashes triumphs, and was considered the best batsman in Test cricket for a good five years. Karthik Parimal looks back at the career of this celebrated cricketer. David Boon, born December 29, 1960, was one of Australia’s favourite cricketing heroes. He played a key role in four of Australia’s Ashes triumphs, and was considered the best batsman in Test cricket for a good five years. Karthik Parimal looks back at the career of this celebrated cricketer.

Australian Rules football and cricket are two of the most popular sports Down Under. While the former is prevalent during winter, the latter thrives during the months of summer. Quite a few Australian cricketers have expressed their love for football, and a few even started out with the intent of making it their profession. David Boon was certainly one among them, but when it was time to take a call between the two, he happened to injure his knee and that brought down the curtains on his football career. It was then that he began to concentrate on cricket, and little did he expect to reach dizzying heights.

Australian cricket was at its lowest ebb when Boon got picked to don the national jersey. A few retirements had knocked the wind out of their sails, and the fact that some of them opted to go on a rebel tour to South Africa didn’t help matters either. Nevertheless, it presented a great opportunity for newbies like him to carve a niche on the big stage. Having made his debut in the Benson and Hedges World Series Cup final against the mighty West Indies, Boon managed a gritty 39, but it wasn’t enough to help Australia gain the upper hand.

His Test debut wasn’t a memorable one either. Nonetheless, it played a big role in boosting his morale. A hard-fought 51 in the second innings against a bowling line-up that featured the likes of Malcolm Marshall, Joel Garner, Michael Holding and Courtney Walsh showed what he was capable of. Like fellow teammates Allan Border and Geoff Marsh, Boon sometimes turned down scoring opportunities to sum up the pace and bounce of the pitch, but once he became familiar with the conditions, he let his natural instincts take over and made the most of it. That speaks volumes of his mental toughness.

Boon flourished under Allan Border’s tenure as captain. He played 88 of his 107 Tests with the latter as his skipper, and he scored 6502 runs in them at an average of 46.44, which is slightly higher than his career average of 43.65. He was also Border’s deputy and the two did a commendable job to steady the ship, both on and off the field. Whenever the Australians registered a famous victory, it was Boon who led the team victory song, ‘Underneath the Southern Cross I Stand’, in the dressing room, before Ian Healy and later Ricky Ponting were anointed successors in the later years.

Boon played a pivotal role in four of Australia’s Ashes triumphs, with the one in 1989 easily being one of his best. Of the six Tests, the Australians won four, drawing the remaining two, with Boon amassing 442 runs in 11 innings at an average of 55.25. “The special thing about ’89 was that we won the Ashes back, and we did it in four Test matches. It was a tour where everything we touched turned to gold. It was a really hard, long tour: winning a Test match, playing a county game the next day, travel a day, play another county game, then straight into a Test match two days later for four months,” Boon said.

From 1989 to the beginning of 1994, Boon hit a purple patch. During this phase, a few from the cricket fraternity felt that he was the best Test batsman around, and Boon had the statistics to back that claim. In 50 Tests during the aforesaid period, he scored close to 4000 runs at an average of 54. He was only 50 runs behind fellow teammate Mark Taylor in the list of highest run-scorers overall, however, Taylor’s average was six behind. Only Graham Gooch of England came close to matching the duo’s contributions during this phase.

Apparently, Boon and Geoff Marsh were inseparable during their playing days. Despite contrasting personalities, they were always together. While Boon enjoyed solitude and loved reading a novel during his spare time, Marsh loved bonding and was totally against the proposal to give guys single rooms on tour. During one instance, frustrated with Boon, Marsh converted the former’s paperback into a 100-page jigsaw puzzle. Nevertheless, to assume that ‘Boonie’ did not enjoy his drink would be naïve. On one trip to England for the Ashes series, he drowned 53 cans of beer during the flight and, understandably, found it difficult to walk once they landed at Heathrow Airport. It was Marsh who realised his mate’s quandary, grabbed his arm and escorted him through customs. Allegedly, Boon returned to normalcy after a couple of days of sleep.

Prior to the ’96 World Cup in subcontinent, Boon bid goodbye to all forms of international cricket. The Adelaide Test against Sri Lanka during the beginning of that year was his last, and it was a befitting farewell as his side trumped the visitors by a margin of 148 runs. Ironically, when Boon called it quits, Marsh was a part of the selection panel. There’s little doubt that Boon played a key role in the resurgence of Australian cricket, and while the country produced many cricketers to maintain the legacy, his presence was something that could never be replicated. 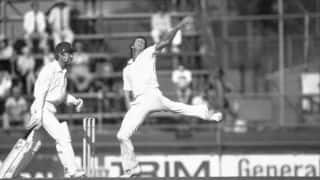 Jeff Thomson: One of the biggest fast-bowling terrors in cricket history