'Shep' was the first to stand in all ten Test-playing nations. People waited for his antics when a team reached a multiple of 111.

Chubby and extremely lovable, David Shepherd was born December 27, 1940. Abhishek Mukherjee looks at the man in white coat who made umpiring a delight to watch

David Robert Shepherd did not possess the glamour of Dickie Bird. He was flamboyant, but not as charismatic as his illustrious colleague from Barnsley. He did not scold cricketers or make wisecrack comments at them (though there was the occasional banter); ‘Shep’ was a plump, pleasant personality who would make you smile, not laugh.

There was the fluttering of fingers when there was a four or six. Wides and no-balls were signalled with an air of finality. Like Bird, you did not usually argue with Shepherd. He had that air about him — unless a side was on 111 or its multiples. It was then that he broke into his regulation exercise of hopping as much as his bulk allowed him to; it was a sight spectators craved to watch.

Simon Taufel, of course, knew the mantra behind the man’s success: “What doesn’t get highlighted is [Shepherd’s] man-management skills: creating a happy environment for players to play in. And Shep was magnificent at that. The players had this enormous respect for him as a person. He put them at their ease and forged relationships that crossed all cultural and political divides.”

Wisden wrote in Shepherd’s obituary: “He was placid, friendly, humorous and devoted to the game, its players and its best traditions. The authorities struggle for a definition of ‘The Spirit of Cricket’. Perhaps the best answer is simply ‘David Shepherd’.”

The son of a sub-postmaster who had previously worked in merchant navy, Shepherd was born in Instow, a village near Bideford, Devon. Shepherd senior played cricket and rugby for Devon, and became an umpire at North Devon Cricket Club after losing an eye (no, this was not the reason behind David’s superstition) in World War I. David’s mother and brother Bill also worked in the same post office. Bill went on to represent Devon in the Minor Counties Championship.

David went to school at Barnstaple before attending St Luke’s College, Exeter. He was a formidable batsman from his school days, and was also competent in rugby (he played scrum-half for South Molton). However, it was at St Luke’s that he played probably his first spectacular innings.

He later told The Independent: “One whit Monday we played a 20-over game against ex-students on the college ground. It was one we badly wanted to win as there was pride at stake. I hardly paused for breath and hammered my way to 100 off ten overs. It became quite a talking point. The local Express and Echo got quite lyrical over it and suggested, with maybe a bit of journalistic licence, that I’d smashed two windows in the process.”

Shepherd beat Bill to the Devon side, won the Devon cap in 1960. He was also a decent student. As per his autobiography Shep, he was in the A-Stream and got eight O-levels, and played cricket alongside his stint as a teacher at Bideford and Ilfracombe. He joined the Gloucestershire staff shortly afterwards, and made his First-Class debut in 1965.

He slammed 108 on debut at Oxford University Parks. His runs were scored out of 139 Gloucestershire scored during his stay. He scored two hundreds in three matches in 1967, scored a career-best 153 against Middlesex at Bristol in 1968, and earned his Gloucestershire cap in 1969.

His approach to batting was uncomplicated, but he was not too agile. As Bird told The Telegraph in an interview, “David hit the ball hard, and he often hit it for six. But he wasn’t the most mobile. Even early in his career, he always carried a lot of weight.”

Bird’s lines contradicted those of Tony Brown, Shepherd’s captain: “He could play all the shots. He could late cut and hit off the back foot, but he did love the aerial route. He was brave too: I remember him taking on Butch White, who was very quick. And he was surprisingly nimble on the field, very light on his feet. He was as fast over 22 yards as anyone.”

His rotund looks obviously had a lot to do with his diet. Shepherd’s colleague Jack Davey told The Telegraph: “David was supposed to be following a strict regime of carrot juice and enemas. But he had a large sash window in his room, and after dark he would pop down to the local pub and have a meal with the landlord. At the end of a week’s stay, he had lost precisely one ounce.”

Geoffrey Moorhouse wrote of him: “It is not only his build, though that calls the deep-rooted countryman to mind. His bottom hand is clamped massively just above the shoulder of the bat, as some ancestor probably held a scythe, or possibly a blacksmith’s maul. He stands… head scanning the field of play the way men do by gates when they are contemplating crops.

He was also not one for workouts. The Gloucestershire cricketers were supposed to go on a cross-country one morning, and Shepherd obviously trailed the others by a distance. Bird narrated the rest in his autobiography: “He jumped on to a milk float, sat on the ledge, holding on for dear life, with the bottles tinkling merrily around him and his legs wobbling in the air. He was first back to the county ground at Bristol, and the other lads could not believe it when they huffed and puffed their way into the ground to see Shep there with a smirk of superiority on his face.”

An incident, as narrated by Bird in White Cap and Bails, is worth a mention. Playing against Derbyshire at Ilkeston, Shepherd gloved one from Keith Stevenson down the leg, and Bob Taylor took the catch. Nobody appealed, and the incident just passed. The following conversation ensued:

Shepherd took to umpiring because a friend told him that the profession would offer him “the best seat in the house”. Within two years he made his international debut — in the World Cup, no less — in a contest between Pakistan and Sri Lanka at Swansea. It took him two more years to make his Test debut, but he started with an Ashes Test at Old Trafford alongside Bird.

It was generally a seamless career with the occasional hiccup. Poor decisions were rare, and he never hesitated to be harsh. He stopped Waqar Younis from bowling after he sent down two beamers in the World Cup 2003 encounter against Australia. In a Test career spanning two decades, perhaps the finest decision was ruling Rahul Dravid not out off Brad Williams at Adelaide Oval in 2003-04; numerous replays later the television cameras realised that the ball had missed the bat and brushed the right arm.

The nadir, however, came at Old Trafford in 2001. Chasing 361 against Pakistan, England were cruising at 201 for 2 when a collapse started. It all started with Eddie Nicholls missing out on a no-ball when Wasim Akram trapped Nick Knight leg-before. At the other end, Shepherd missed two no-balls off consecutive deliveries when Saqlain Mushtaq had Ian Ward caught-behind and Andy Caddick clean bowled.

With 7 overs left in the Test and England fighting for draw, Shepherd gave Dominic Cork leg-before off Saqlain — once again off a no-ball. There was outrage in the media, and Shepherd even considered retirement. The cricket fraternity (including Australians: he was supposed to officiate in The Ashes after the Pakistan series), however, came to his support, and maintained that a career so illustrious should not end because of three overlooked no-balls. He led the list of the international panel of umpires when it was announced that year.

Of course, Shepherd had feared this may happen. When the umpires had checked in at their hotel at Manchester, Shepherd found out that Nicholls had been assigned Room No. 111.

Shepherd retired in 2005 — at the stipulated retirement age of 65 as per ECB norms. After his last Test at Sabina Park (between West Indies and Pakistan), Brian Lara presented him with a bat that carried a message: “Thank you for the service, the memories and the professionalism”.

In an interview with BBC, Shepherd revealed that his superstition regarding Nelson originated from his days as a kid when he played village cricket. He told BBC: “We found that the only way to counteract something bad happening on a Nelson number was to get your feet off the ground. You could just lift your feet off the pavilion floor if you weren’t in the middle, but if I was on the field of play I would just jump or hop. I would usually jump, but maybe hop depending on what time of day it is, how long I’ve been out there or how hot the weather is.”

Shepherd’s antics were first spotted in his second Test by Brian Johnston, and once Johnston got to know something, there was obviously no stopping him from making it public.

It was, however, not his only superstition: he tied a matchstick to his finger on Friday the 13th (“touchwood”, anyone?).

Following retirement, Shepherd returned to Devon and was named President of North Devon Cricket Club 2006. He married his partner Jenny in 2008 (following a 36-year relationship). Bill was, of course, around, as was David’s dog. David helped Bill with work, delivering newspapers. Jenny told The Telegraph: “Some of our neighbours thought it was funny to see him on the telly one day and then on their doorstep at 6.30 AM the next.”

David Shepherd was awarded MBE in 1997 for his services to cricket. Unfortunately, he lost a battle against lung cancer and passed away at Instow on October 27, 2009 — exactly two months before his 69th birthday. He was survived by Jenny, and he left £248,083 in his will. 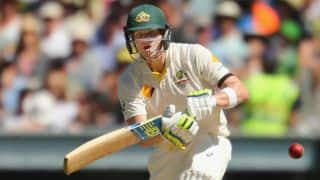