Warner guided Sunrisers Hyderabad to their first ever IPL title.

In January 2009, David Warner became the first man since 1877 to debut for Australia before playing First-Class cricket. Then 22, Warner made an immediate impact in the format by slamming a 43-ball 89. Hailed as a Twenty20 (T20) wonder back then, Warner has excelled in every format and is currently one of the best batsmen in the world. The journey has not been easy for him, rather curious. At some point it did feel that his promising career would go the Andrew Symonds way but luckily he applied brakes and got his priorities right.  Full Cricket Scorecard: Royal Challengers Bangalore vs Sunrisers Hyderabad, IPL 2016 Final

On Sunday, Warner led Sunrisers Hyderabad (SRH) to their maiden Indian Premier League (IPL) glory and coach Tom Moody hailed his fellow countryman, “He has got incredible work ethics and discipline, which are so important from a leadership point of view and that has rubbed off on the group.”

I will pick ‘discipline’ and ‘leadership’ as the words that one would not distantly associate with Warner in preceding years. In January 2015, the late Martin Crowe had infamously written about Warner as,”Warner can play, but he is the most juvenile cricketer I have seen on a cricket field. I don’t care how good he is: if he continues to show all those watching that he does not care, he must be removed, either by Cricket Australia or definitely by the world governing body.” ALSO READ: Laxman hails inspirational Warner

His on-field behaviour was rubbing opponents the wrong way and he almost put shutters down on his flourishing career when he got involved in a pub brawl with Joe Root. From rants on social media to ugly sledging, Warner has come a long way from being a brat to a respected leader.

This is where fatherhood and ambition can take you. Warner recently told Times of India, “It’s (fatherhood) encouraged me to be a different person in the sense of being a role model for my daughters and for kids in general. Having two beautiful daughters and a caring wife has settled me a lot. It has helped me be the person I am today. I made a lot of mistakes but in my life away from cricket, there were things going on that never needed to get expressed. But I came out of them feeling very good. I love the person I’ve turned into.” ALSO READ: Warner: If Gayle went going in IPL Final, it would have been difficult

He has set his sights on emulating the likes of Ricky Ponting and Matthew Hayden; he wants to leave an impression on Australian and world cricket. Apart from being a world-class cricketer, Warner has grown to be a doting father (one has to follow him on Instagram to truly realise that), loving husband, an author of books for children, and a smart businessman who has invested in vodka distilling, real estate and race horses. He did not have the most lavish and privileged childhood but Warner is now making things count.

Not long back, Warner made an interesting revelation when he said that he has kept himself away from alcohol for a year now, and that has benefitted him. For his growth as a person, cricketer and a leader, the ever-caring Cricket Australia (CA), who have shown a lot of patience with him, has rewarded him with the national vice-captaincy but it is time they leap to another step.

One can be blunt to state the fact that Australia by a distance have been the best cricketing side ever since the sport became international. They have dominated the close-to-140-year of Test history, won five out of the 11 ODI World Cups, have two Champions Trophies in their kitty but when it comes to T20, the wardrobe is empty and success have been rare.

The vision and priority lacks when it comes to T20 and it is apparent with the fact that their best players do not get to play in the cash-rich Big Bash League (BBL) because of the international cricket in the Australian summer.

It is time; Australia set sights on this format because they have some of the best T20 players at their disposal. Unlike in Pakistan, Australian captaincy is not about musical chairs but in recent times, Australia have been forced to change T20 skipper. George Bailey made way for Aaron Finch and the latter was recently replaced by Steven Smith.

Leading the ODI and Test side, Smith already has a lot on the plate and with Warner proving his leadership credentials, it is time, Australia reward him with captaincy in the shortest format.

When IPL 2016 began, Sunrisers Hyderabad (SRH) were not among the favourites. They lacked the star value and rather were a side that was stocked with young and effective cricketers. The competition in IPL is tremendous and Warner led from the front. He amassed 848 runs this season and did not hesitate to gamble. Despite Shikhar Dhawan’s indifferent form at the start of IPL, Warner backed him. He knew his side’s strength lied in his batting and the team’s pacers. Warner’s leadership was all about self-belief and backing the players. Like team mentor VVS Laxman said that Warner had cleared it that the team is not full of superstars but each one of them are important members.

His communication was excellent. He learned Bengali in order to successfully communicate to his ace bowler, Mustafizur Rahman, who understands only that language. While many leaders in recent times talk about the right process, Warner brought in the dose of Australian-way of playing for the win. In doing so, he did not violate any spirit of the game and that get illustrated in the fact that SRH won the fair play award too.

He is tactically sound, has the hunger to win, leads from the front and has one of the most coveted T20 trophies in his cabinet. What more do you need to qualify for the role of Australia’s T20 skipper? 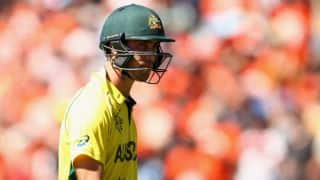