In the match dominated by bowlers, Bhuvneshwar Kumar ran away with a fifer, thus stealing the limelight. Here s a look at all this, as well as other highlights of the match.

David Warner carried the bat on a track that was two-paced. When Kings XI Punjab (KXIP) came out to bat, Manan Vohra outscored the second-highest individual scorer from his team by 82 runs. Warner s 70* and Vohra s 95 were two of the biggest highlights from Sunrisers Hyderabad (SRH) and KXIP s Indian Premier League (IPL) season 10, Match 19 clash at Rajiv Gandhi International Stadium in Uppal, Hyderabad. However, in the match dominated by bowlers, Bhuvneshwar Kumar ran away with a fifer, stealing the limelight. Here is a look at all these as well as other highlights of the match: FULL CRICKET SCORECARD: Sunrisers Hyderabad vs Kings XI Punjab Match 19

David Warner s carrying-the-bat effort: The Orange Army commander led from the front and almost single-handedly guided SRH to 159 for 6. The wicket was two-paced and run-scoring was not easy. Warner reassessed things in the middle and propelled his side to a match-winning total with his carrying the bat innings of 70*. This was his 34th IPL fifty, which meant that he set a new record, surpassing Gautam Gambhir s tally of 33. This was also Warner s 5th fifty against KXIP in as many games. In the process, he also got the Orange Cap.

Akshar Patel s twin strikes: Akshar scalped two big wickets off successive deliveries to peg SRH back in the contest. In the 10th over, he first got Moises Henriques stumped for 9 before removing Yuvraj Singh for a golden duck.

Super Saha: Wriddhiman Saha was exceptional behind the wickets today, effecting 2 catches and 2 stumpings. The catch that stood out was of Shikhar Dhawan, who departed trying to hook a short ball from Mohit Sharma. More than the bowler s wicket, it was Saha s, who timed his jump well and took a smart catch high in the air.

Mohammad Nabi s debut: Nabi made his IPL debut on Monday. The match, thus, gained historical significance even before the first ball being bowled, since this was the first time when two players from an Associate Nation were featuring in the same XI in an IPL game. Nabi did not get much to do with the bat, but he ended up with figures of 4-0-28-1, cleaning up Eoin Morgan. Nabi could have had 2 more wickets: Vohra got a reprieve on 32 when Nabi caught him plumb but the umpire thought otherwise, and later in the same over he dropped a simple return catch off Akshar.

Rashid thrashed: For the first time Rashid failed to take a wicket in his first over in IPL 10. Furthermore, he went for 42 runs in 4 overs. Though he did turn the course of the game by cleaning up David Miller and Saha in the space of 3 balls, but he was carted for 4 fours and 3 sixes by Vohra. Rashid himself had hit a six off the only ball he faced.

Vohra s blitzkrieg: Vohra s classy 95 came off just 50 balls. It was laden with 9 fours and 5 sixes. It looked like he was batting on a different wicket and his teammates on another. Importantly, he took on Rashid, who has been tormenting the best of batsmen in this tournament, with remarkable ease. The other ten KXIP batsmen scored just 49 runs between them, which sums up why KXIP lost. However, Vohra s knock was not chanceless. He was dropped by Dhawan and survived a close lbw appeal off Nabi s bowling. 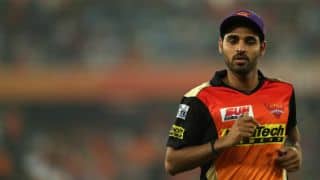 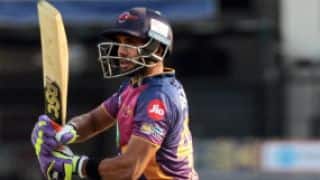