David Williams: West Indies' talented glovesman whose career never got going due to his inability with the bat

David Williams: West Indies' talented glovesman whose career never got going due to his inability with the

On November 4, 1963, former West Indies wicketkeeper David Williams was born. A diminutive man, who was quite capable behind the wickets, but struggled to make a mark in international cricket due to his below par batting. Shrikant Shankar looks back at the relatively short career of Williams. 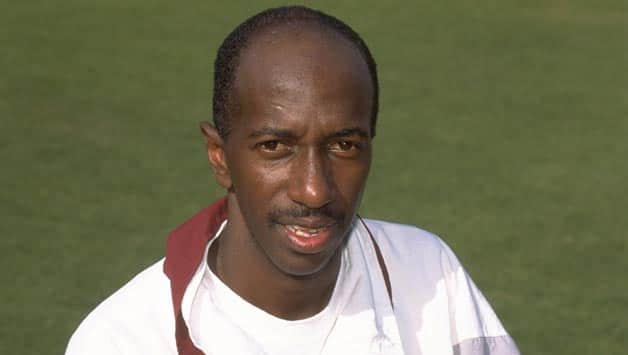 On November 4, 1963, former West Indies wicketkeeper David Williams was born. A diminutive man, who was quite capable behind the wickets, but struggled to make a mark in international cricket due to his below par batting. Shrikant Shankar looks back at the relatively short career of Williams.
To follow in the footsteps of Jeff Dujon was never going to be easy for any wicketkeeper in the West Indies side. Dujon was an exceptional glovesman and a very handy batsman. The man waiting in the wings to replace Dujon was David Williams. He was a gifted wicketkeeper, but unfortunately, was unimpressive with the bat. Williams was born on November 4, 1963, in Trinidad. He made his debut for West Indies in a One-Day International (ODI) against India in Rajkot on January 5, 1988. He only played three more ODIs that year and played only one ODI in 1989. He could bat in only three of those first five matches and he managed to score just six runs.

Williams had to wait for more than one year and 10 months for his sixth ODI. He scored an unbeaten 10 against the likes of Waqar Younis, Imran Khan, Mushtaq Ahmed and Abdul Qadir at Multan in November 1990. This was the first of few times he got into double figures. But again Williams had to wait for more than a year to play his next ODI. He was then given a consistent run with the West Indies after Dujon’s retirement in 1991.

By the time he had played his first Test, Williams had already played 28 ODIs. He had only reached double figures, while batting, on three occasions till then. The best of which was an unbeaten 32 against New Zealand at Auckland in the 1992 World Cup on March 8. He shrug off his usual slow strike-rate to score at 133.33 in that match. His 24-ball blitz included five fours. In New Zealand’s innings, Williams took four catches. But unfortunately for Williams, his enterprising innings and exceptional work with the gloves ended in defeat as the Kiwis won by five wickets. The 32 not out remained his highest score in ODIs. As a wicketkeeper, he had a brilliant World Cup. He affected 14 dismissals in eight matches. This included 11 catches and three stumpings.

His first Test was against South Africa on their return to international cricket after the apartheid era in April 1992. Williams took a total of five catches as West Indies won the match at the Kensington Oval by 52 runs. In his next two Test matches against Australia, he got out for three ducks in-a-row. But in the Boxing Day Test of 1992, Williams took a splendid one-handed catch to dismiss Mark Waugh for 112 at the Melbourne Cricket Ground (MCG). This proved his capabilities as a wicketkeeper. The bowler, Curtly Ambrose, who benefited by Williams’ athleticism, nearly made him disappear with a giant bear hug.

He was replaced for the next three matches of the series by Junior Murray. West Indies won the five-match series 2-1. Williams then had to wait nearly five years to play his fourth Test match. He did not get luck in the ODI squad either as the wait was as long. He finally made his comeback against Sri Lanka in a quadrangular ODI series match at Lahore on November 1, 1997. He played three matches in that series and followed that with four more in another quadrangular ODI series at Sharjah in December 1997. The final was against England on December 19 and West Indies lost the match by three wickets. This was Williams’ last ODI match.

He had played 36 matches in the 50-over format and scored 147 runs at a poor average of 9.18. His career strike-rate was 60.74. In the 23 innings he batted, Williams got to double figures on only five occasions. He also got out for a duck on four occasions with a zero not as well. He took 35 catches and affected 10 stumpings in ODIs.

In Tests, however, he got a slightly longer stay with the West Indies side. England had toured the Caribbean in the beginning of 1998 and Williams was selected in the West Indies squad for a six-Test series. The first Test at Kingston, Jamaica ended in a draw as only 10.1 overs were bowled due to incessant rain. It is in the second Test at Port of Spain that Williams had his shining moment in international cricket. England captain Mike Atherton won the toss and elected to bat against the likes of Ambrose, Courtney Walsh and Nixon McLean. They were expectedly bowled out cheaply for 214 with Williams pouching three catches. Surprisingly, West Indies were bowled out for a paltry 191 as Angus Fraser took eight wickets. England then managed to post a total of 258 before being bowled out. West Indies were set a 282-run target. Stuart Williams scored 62 at the top of the order. Carl Hooper was batting well, but the rest of the batting was quite poor. Hooper was running out of partners and in walked David Williams at No 7.

His previous highest in Tests was 48 against Pakistan in November 1997. With the tail-enders to come, Williams needed to stick it out with Hooper in the middle. Atherton, somewhat inexplicably, employed a negative line to Hooper and to Williams, to a lesser extent. Hooper was well capable of playing his way out of the leg-stump line. But Williams, too, frustrated the England bowlers by showing great resistance. He scored a lot of his runs through the mid-wicket and square-leg region with a series of pulls and hoicks. The duo added 129 for the sixth wicket. There were chances for England to break the partnership early, but some poor fielding and dropped catches meant that he got to his only half-century in Test cricket. He was finally dismissed for 65 after facing 172 balls. His innings included seven fours. Hooper went onto score an unbeaten 94 as West Indies won the match by three wickets on the final day.

Williams played the next three Test matches in Port of Spain, Georgetown and Bridgetown. But his 65 was followed with another set of three ducks. He was dropped for the sixth and final Test at Antigua as Junior Murray again replaced him. West Indies won the six-match test series 3-1. Williams’ Test career spanned for almost six years, but he only played 11 matches. He scored 242 runs in 19 innings at an average of 13.44. He took 40 catches and affected two stumpings in the longest format of the game. He had seven ducks in his career. In First-Class cricket, he played 124 matches and scored 3,063 runs at an average of 19.79. He scored two centuries and eight half-centuries with a highest score of 112. He took 286 catches and affected 50 stumpings.

He then moved into coaching and helped Trinidad and Tobago win many domestic titles. Williams might have been a very good wicketkeeper throughout his career, but due to his inability with the bat, he could not make a proper name for himself in the international arena.