Dean Headley was a fine swing bowler who shone brightly for England who could generate an extra burst of pace to keep batsmen on tenterhooks. Unfortunately, his international career lasted a mere two years.

Dean Headley, born January 27, 1970, was a fine swing bowler who shone brightly for England.  He had an extra burst of pace to keep batsmen on tenterhooks. However, Headley played for a mere two years for England and back problems ended his career. Bharath Ramaraj looks back at the highlights of his brief career.

Dean Headley, grandson of famous West Indian batsman George Headley and son of elegant left-hander Ron Headley, went onto play for England in 15 Tests. Unfortunately, the promising pacer’s Test career was curtailed by back injuries to just two years. He though, in his brief career, showcased his uncanny ability to swing the ball prodigiously by taking 60 wickets in those 15 Tests at an impressive average of 27.85.

More than two decades ago in 1991, here was a swing bowler who left a mighty fine impression on Middlesex’s faithfuls by taking a five-for in his first County game itself against Yorkshire. It took him about four more years in the 1995-96 season to galvanise English cricket by taking a truckload of wickets and ending that season with an average of 15.36. One has to remember that all those wickets in 1995-96 did not come on seaming decks of England. Instead it came on flat tracks of Pakistan against their ‘A’ team. In the First-Class game played at Multan for England A against Pakistan A, he bowled a marathon spell of 26 overs and gave away only 34 runs with 5 wickets next to his name. He and the underrated left-arm spinner Richard Stemp had a field day to take England A to an innings victory. He also had a splendid season with the England A team that toured Australia in 1996-97.

Incidentally by then, he had moved over from Middlesex to Kent, as he thought that he had to earn more to live in an expensive city like London. Carl Hooper, who was playing for Kent helped him to move over to the County.

It was in 1997 that Headley made his Test debut for England against Australia in Manchester at Old Trafford. He swung the ball around the corners, twinned with supreme control to leave Australia in all kinds of problems in the first innings. It was only Steve Waugh’s twin hundreds that saved Australia from the blushes, and they eventually won the Test. In the Test match at Trent Bridge, it was yet again Headley who came out as England’s best seamer by taking six wickets in the game. As other senior campaigners struggled to stand up and be counted, he bowled a lion-hearted spell and troubled the likes of Mathew Elliott, Mark Taylor, the Waughs and Greg Blewett. It was his ability to leave the left-handers that caught the eye of everyone. Sadly, England lost that Test too.

Headley’s moment in the sun arrived when England played Australia Down Under. In a series that Australia dominated, Headley was in prime form and took 19 wickets at just 22.26. It was at MCG that he took his game to dizzying heights. At 130 for 3 in the second innings, chasing a modest total of 175 and that too with Waugh twins motoring along by playing thunderous strokes, it seemed just like a matter of time before they would win another Test.

It was Headley who turned it around by sending Mark Waugh back to the pavilion with the one that jagged away slightly to take his edge. Mark Waugh played with a slightly angled bat which didn’t help him. From there on, Headley bowled a truly remarkable spell to take six for 60 and England won a nerve wracking contest.

Headley said to Sky Sports about the Test at MCG: “I think we had to get Damien Fleming out three of four times (in that second innings). That’s why DRS is massive these days, particularly if you are someone who hits the wickets and reverse swings the ball. Now, DRS has encouraged umpires to make decisions. Anyway, eventually we got him out, he basically padded up to one swinging back in. McGill had got 50-odd in the first innings, but it was unbelievable. Every time it wasn’t on his stumps he’d miss it then every time a ball was straight he’d get something on it. We had allowed the tail to get a few too many first time around, which gave Australia their lead. He just kept getting a thin edge on balls that you thought were through him. But we’d bowled pretty well throughout that series. ‘Goughie’ (Darren Gough)… I loved playing in Test matches with him, he was an inspiration to play with. They are good memories. It was a good night after we’d won!”

Unfortunately, Headley played just 3 Tests in that series and was troubled by a chronic back problem during that time. Headley said to Sky Sports about the untimely injury, “Basically, when I came back my problems started. I remember being at pre-season and the confidence level in me was massive. I had my strategies and knew what I was doing after taking 19 wickets on that Ashes tour.”

“Then I slipped on a mat during outdoor nets, though at the time I didn’t think anything of it. I played the very next day against the Kent League in a friendly and I suddenly did not know where the ball was going. It was like someone had flicked a switch overnight. I played the whole of that summer and averaged something like 44, and that wasn’t with the bat! I played two Tests in that time and I couldn’t have told you if it was going down leg or off side. I knew there was something stopping me from bowling, but I didn’t have any pain at the time. I honestly have never had that in my life. I haven’t got it now, either. To stand on your run up and think ‘I hope this ball goes somewhere near’ is just a nightmare.”

He went onto to play 2 more Tests for England during their dismal performance against New Zealand in 1999. It was the time when they slipped to last place in the Wisden rankings after losing the series 2-1. Headley’s back injuries continued to haunt him and he finally walked into retirement life in 2001.

The Guardian reported Headley as saying, “I sustained a back injury in April 2000 and I feel that, on medical grounds, I have been left with no option but to retire.”

“I have enjoyed the years playing cricket for Kent, Middlesex and England, and am naturally very disappointed to have to make this announcement.”

The then Kent captain Mathew Fleming on the swing bowler, “On behalf of everyone at Kent I would like to pay tribute to Dean and the enormous contribution he has made to Kent and Kent cricket since his debut for the county in 1993.

“Statistics alone will never show his full value, both in the dressing room and on the pitch. As a fearsome opening bowler, no mean batsman and a brilliant athlete, Dean will be irreplaceable at Kent. We all wish him well in the future in whatever he does.”

On his day, Dean Headley could get the ball to swing and swerve in the air at considerable pace and be a handful, especially against left-handers. However, back injuries became the bane of his career. A case of what might have been indeed! 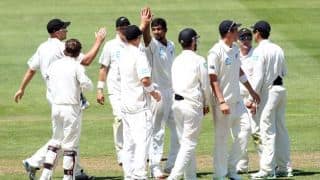 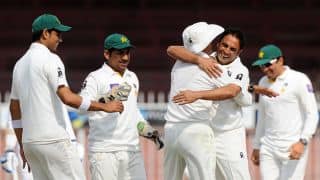