Young and fresh talent learning cricket at an international level and there you go, that half-century against South Africa in ICC World T20 2007 was enough to provide all the answers.

An open letter, from a fangirl

This is neither a normal letter nor a fangirl moment, but an opportunity I have always pined to write on. I have been following cricket since mid-2000s, when a certain Mumbai boy happened to cricket, a young, fresh talent learning cricket at an international level; and there you go, that half-century against South Africa in ICC World T20 2007 was enough to provide all the answers. It just did not stop there; you subsequently added more feathers to your cap and made me admire your signature shots as time passed. Since then, cheering for you has been part and parcel of my life.

2010 also belonged to you for your consecutive ODI centuries. 2010 was also the year when I realised how much I was in awe of you. It was unadulterated fangirl-material, where numbers and performances are seldom considered. You have been criticised, accused of not scoring big many a time, but none of those could bring down the image that you had created in my mind. Then came IPL 2013. Being a Mumbai Indians (MI) fan all through, I secretly prayed for you to race to that Orange Cap. You have no idea how this foolish girl was hoping for her adored cricketer to win the game.

When you joined the MI squad despite Sachin Tendulkar leading the team, a silly girl was shouting her guts out Rohit , Rohit every time you took field, especially when I got to witness the MI and DC game in 2012. It was time for you to prove your worth from front. It was time for you to own the throne as successor of the Master Blaster. Then you took over the mantle from Ricky Ponting, and led MI to the title. You will never be able to guess the way my emotions gushed out with MI lifting the trophy in 2013. That moment when I was jumping up and down like a yoyo with my family going bonkers to get me back to my normal self. It was time I got to know the secret behind your jersey number; I knew how 9 was lucky for you. It was under your captaincy that MI have won two IPL titles, tallying with likes of Gautam Gambhir and MS Dhoni. It may sound selfish, but Ricky Ponting s loss was your win. You are termed a valuable player, and yes, for me you will remain valuable forever.

IPL 2016 has belonged to you (well, at least as far as I go; numbers do not matter to fangirls, you see). Those match-winning moments, be it in Eden Gardens or be it the last match at Wankhede were special. You knew how special this Wankhede innings was. It was your one last chance in this IPL to shine in your home ground, and you pulled that off with such ease! You have the knack to stay with your partners and support them, guide them to carry the momentum. That was precisely what you did today: two 50-runs partnership in a crunch T20 match is no joke. When you needed to take charge, you rose to the occasion; but when you realised that Kieron Pollard was the ideal man to play those lofted shots, you were happy to give him strike and watch calmly at the other end.

You can be unstoppable when the team is in dire need of a saviour. On the rare cases when you are unable to give your best, it is okay! Every batsman has gone through highs and lows. Believe me, I felt the pain when you, my captain, cringed at an overthrow. Every time you appreciated your fielders, I was laughing with you as well. Every time you lost your temper, I told myself it is ok, he is still the best. MI have won the title twice, with team efforts and your inspiration. Do not let it down.

Shine on, Rohit Sharma. Whether you win or lose, you can count on this girl from the other side of the same city. 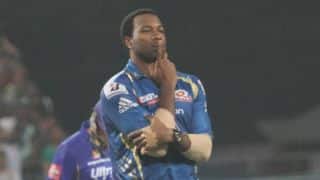