Debasis Mohanty gave hope to Indian public when he first he made his international debut in 1997. Unfortunately, it was an era when followers connected only with the batsmen.

Born July 20, 1976, Debasis Mohanty gave hope to Indian public when he first he made his international debut in 1997. Making his debut in an era when the followers only connected with batsmen, Mohanty managed to get a few of them excited by what he brought to the game. Prakash Govindasreenivasan has more.

It was in the late ’90s when cricket was starting to turn into an addictive drug among the Indian masses. The team in 1983 may have brought World Cup glory, but the country was enchanted by what one individual by the name Sachin Tendulkar was starting to do. Such was the craze, that the hysteria among the fans that they did not take a particular liking towards the other aspects of the game. India’s mediocre bowling attack, thus, failed to grab the attention.

At such a time, arrived a young, lanky right-arm fast bowler from Orissa (now Odisha), who made a major section of the cricket connoisseurs in India stand up and take notice of his uncanny ability to swing the ball both ways. It was something that not many bowlers of the past could pull off. It was something that could help India do well in overseas conditions, something that was always a grey area for the side.

In that sense, Debashish Sarbeswar Mohanty was truly, an exciting prospect, but unfortunately he remained just that.

In 1997, India tried a handful of medium pacers. The likes of Abey Kuruvilla and Harvinder Singh also got a chance to play at the highest level of the game. However, they couldn’t get the longer rope of the selectors. Mohanty, who debuted in the same year as these two bowlers, did quite well to hang around for a longer period.

Mohanty had a rollicking start to his Test career in India’s tour of Sri Lanka in 1997. Sri Lankan heavyweights such as Sanath Jayasuriya, Roshan Mahanama and Aravinda de Silva were his first 3 wickets. He finished that innings with figures of 4 for 78 at Colombo but sadly, that was the last time he picked up a wicket.  He only featured in three more innings in the same year, after which he was sent down the pecking order and failed to resurface.

What made him an exciting prospect was his exploits in the shorter format of the game.

Mohanty’s first ODI wicket was also a left-handed giant, this time Pakistan’s Saeed Anwar. This came in the first of the five-ODI Sahara ‘Friendship’ Cup between the two arch-nemeses in Toronto in 1997. Defending a modest total of 209, Mohanty’s early strike set the tone for the rest of the innings and a good performance by the bowling unit helped India draw first blood with a 20-run victory.

India carried their momentum forward into the second ODI and were asked to chase on this occasion. Mohanty’s spirited performance (3 for 15 from 7 overs) helped India shut out Pakistan for a paltry 116. Mohanty sent Shahid Afridi packing for a four-ball duck and also dismissed Anwar and Ijaz Ahmed in quick successions to leave Pakistan reeling at 27 for three. India registered a comfortable 7-wicket win to take 2-0 lead.

The next ODI belonged to Sourav Ganguly who stunned Pakistan with his fifer. Mohanty and Harvinder chipped in well with 2 wickets apiece to help India defend as little as 182 and take an unassailable lead in the series.

Mohanty finished with 8 wickets from 5 matches, as many as Pakistan’s best bowler in the series Saqlain Mushtaq could manage.

His next challenge was to emulate the same kind of success in the subcontinent conditions that would not suit his kind of bowling. He struggled to pick a wicket in the three-match series in Pakistan but managed three each in two ODIs played against Sri Lanka at home.

After an ordinary year with the ball in 1998, Mohanty was set to miss out on the opportunity to represent India in the 1999 World Cup when he wasn’t named in the initial list of probables. However, Mohanty was roped in at the last moment keeping the England conditions in mind.

In his first game of the tournament against Kenya, Mohanty achieved his career best figures of 4 for 56 after Sachin Tendulkar and Rahul Dravid added an unbeaten partnership of 237 runs to take India to 329.

His next big contribution came in the game against England at Edgbaston. India needed a win to qualify for the super sixes and had to beat the home side for it. After being put in to bat by Alec Stewart, India managed to post 232, courtesy a half-century from Rahul Dravid and useful contributions from Sourav Ganguly (40) and Ajay Jadeja (39). The asking rate was under five and one would have expected England to finish on top and qualify for the next round. But, an all-round performance from the Indian bowling unit denied them the chance.

Yet again it was Mohanty who started the proceedings. He dismissed the dangerous Stewart and Graham Hick off consecutive deliveries to jolt the home side. He finished with 2 for 54 as India won by 63 runs.

Mohanty went on to pick 10 wickets in the World Cup to become India’s second highest wicket-taker in the tournament after Javagal Srinath (12). 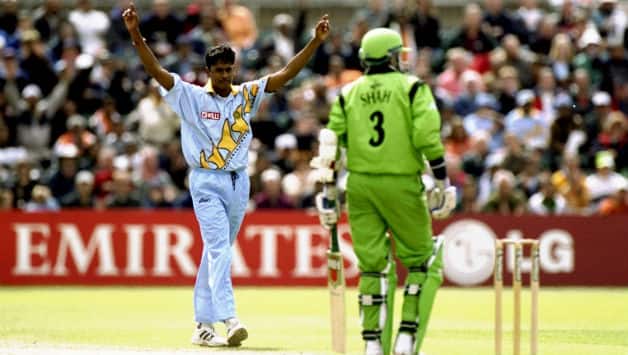 One of the most exciting aspects of Mohanty’s bowling was his fluid bowling action. It was so eye-catching that it was used as the official action of the 1999 World Cup graphical logo.

Following a successful stint in England, Mohanty did well in the Coca-Cola Singapore Challenge in 1999 where India played against Zimbabwe and West Indies. India lost out in the final to the West Indies but Mohanty added to his personal achievement by picking up 9 wickets in 3 matches.

After tasting much success in 1999, Mohanty played just three matches in the following year as he was often in and out of the side. In January 2001, Mohanty showcased his true class in the Duleep Trophy. On a green-top wicket in Agartala, East Zone’s Mohanty ran through the entire batting line-up of South Zone to become the third Indian to claim all ten wickets in an innings in the domestic circuit. The South Zone side, ably led by Dravid was skittled out for 113 as Mohanty wrecked havoc. He followed this up with miserly figures of 2 for 18 from 10 overs in an ODI against the West Indies in the Coca-Cola Cup at Bulawayo.

Yet, Post-2001, chances to play for India were hard to come by and he continued to ply his trade at the domestic level. Mohanty featured in 45 ODIs for India, picking up 57 wickets at an average of 29.15.

In May 2011, Mohanty was appointed coach of Orissa, taking over from Australia’s Michael Bevan.

Having picked up 417 wickets in 117 First-Class matches for his state, Mohanty was looked at as the best man for the job. In 2012, he was also handed coaching responsibilities of East Zone. During his tenure they went on to defend their Duleep Trophy title in 2012.

Mohanty was not an exceptional bowler who could take the world by storm. In the little shelf life that his career had, he proved to be a wicket-taking bowler with the ability to use swing like no other Indian bowler of his times. Yet, his career saw a premature end due to lack of opportunities at the highest level.