Delhi Daredevils have added star power to their side with the inclusion of Yuvraj, Zaheer and Mathews.

Delhi Daredevils (DD) have added star power to their side with the inclusion of Yuvraj Singh, Zaheer Khan and Angelo Mathews. They already have a couple of good players, who were retained by the owners. Despite acquiring some big names, this squad could have done with a few more players. Pramod Ananth feels that the franchise lost the opportunity to buy a few more players in pursuit of Yuvraj. UPDATES: Delhi Daredevils at IPL 2015 Player Auction

Yuvraj Singh is undoubtedly one of the best players in the world when it comes to the shortest format of the game. He had a good season for Royal Challengers Bangalore (RCB) last season but after being released, a host of teams were after him. DD had to compete with Rajasthan Royals (RR) and Kings XI Punjab (KXIP), and managed to outbid all of them. Yuvraj, thus becoming the costliest player in the IPL 2015 auction yet again as he was bought for a whooping price of Rs. 16 crore, with his base price being just Rs. 2 crore. A lot will be expected of him as DD aim to win their maiden IPL title this season.

Sri Lanka skipper Angelo Mathews’ purchase for Rs. 7.5 crores was overshadowed by Yuvraj’s sale. Mathews, who is currently at the ICC Cricket World Cup 2015 leading his nation, was bought at what many would consider a bargain. His base price was set at Rs. 1.5 crores. Mumbai Indians (MI) and DD went on a rampage and were matching each other bid for bid, with RCB too sneaking in once or twice. But after the other two franchisees pulled out, Mathews finally went to DD for five times over his base price of Rs. 7.5 crores. With England batsman Kevin Pietersen sold to Sunrisers Hyderabad (SRH), captaincy will be up for grabs. Will it be Mathews or Yuvraj? That will be a call for the management and the coaching staff to take.  Mathews is easily one of the better all-rounders, who was put up for sale and DD should consider themselves lucky to have gotten him.

After being unsold in the first round, Albie Morkel found his way into DD’s roster. Albie’s brother Morne was once part of the same franchise, but now Morne plays for Kolkata Knight Riders (KKR). Another player that will be entrusted to perform is Zaheer Khan, who was one of the stars of the 2011 World Cup will play for DD after he was snapped up for Rs. 4 crore after he was unsold during the first round of auction. MI were keen to get Zaheer back, but they eventually pulled out and Zaheer will now play for his third IPL club after RCB and MI.

Australia all-rounder Marcus Stoinis is the unknown quantity in their purchase. He has a First-Class century and has a decent T20 career, but DD surely see some talent in him as they were willing to pay Rs. 5 lakh more than the base price and secure him at Rs. 25 lakh. Even he would’ve been pleasantly surprised with this news. Dominic Joseph Muthuswamy, the Maharashtra fast bowler was purchased for Rs. 75 lakh despite of having a base price of Rs. 10 lakh. He has played just eight T20 games and has picked up nine wickets at an economy rate of over 7.5.

India’s Shreyas Iyer was sold for Rs. 2.6 crores after having a base price of Rs. 10 lakh. He does not have a great T20 record and his purchase raises a lot of questions. There was a tug of war between MI and DD, but the uncapped player wouldn’t have thought in his wildest dreams that he will be sold for this high price. Amit Mishra is the only spinner picked in the side and Australia fast bowler Gurinder Sandhu too will be playing his maiden IPL after he was taken for Rs. 1.7 crores. Sandhu made his international debut against India in the recently concluded tri-series in Australia.

Strengths: Purchases of Yuvraj and Mathews are major boosts. With JP Duminy retained, they form an excellent trio. Mathews is a regular bowler, Yuvraj and Duminy too can bowl a bit, which adds value to their team.

Weaknesses: DD do not have enough depth in their squad. An injury to any of the star players will find them in a spot of bother and they might find that there’s no one to step up to the plate when it’s required.

Strangest selection: Muthuswamy and Shreyas Iyer’s acquisition for such inflated prices was not something many would’ve expected. It will be interesting to see the roles of they play and also if they can justify their price tag.

Dark Horse: Iyer could be one of the stars for DD. He has not had much experience in T20s but is a well established figure in the domestic circuit. Adaptability to the shortest format will be key for him; he has the talent and temperament to shine otherwise.

Elton Chigumbura: Everybody is in good nick 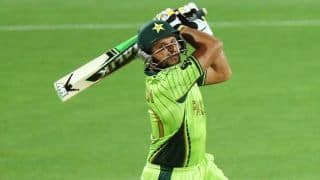