The day an Arsenal left-winger kicked a cricket ball from mid-on to run out Vijay Merchant.

On August 19, 1946, an Arsenal left-winger called Denis Compton kicked a cricket ball from mid-on to run out Vijay Merchant at The Oval. Abhishek Mukherjee looks back at a footballer’s antic that ended in being a scorecard entry.

Vijay Merchant had heard of Denis Compton before. Of course, everyone in India had heard of Compton. After all, he had been around in India for a while playing for Holkar. News of his achievements with the bat had reached India the same way the country had got to know of the War.

What the Indians, Merchant included, might not have known is an obscure fact from a Lancashire vs Middlesex match played in Old Trafford in 1938. Joe Hulme had attempted a single, possibly making a judgement based on the fact that by the time Hulme would stoop, pick up the ball, and throw, Iddon would have made his ground.

What the poor Lancastrian had forgotten completely that Hulme was also a more than capable footballer; the Arsenal striker did not need to bend his body: he simply kicked the ball to hit the stumps and run Iddon out.

Whether Merchant had heard of the incident can only be speculated, but what is sure that he was not prepared to be at the receiving end of an encore. He should have, given that Compton’s skills as a left-winger were quite famous by 1946. He had made his league debut against Derby in 1936 and in 1936-37 had scored 5 goals in a match twice. Even during The War, Compton had played 120 games for Arsenal and had scored 74 goals.

The 1946 series was more of a “resumption of cricket after the War” series. Merchant, by then a senior member of the side, was named the vice-captain to Nawab of Pataudi Sr, who had earlier made a hundred on his debut for England.

With Vizzy nowhere to make things murky the Indians played with a better mindset than in 1936. Alec Bedser (11 for 145) and Joe Hardstaff Jr (205 not out) had flattened them at Lord’s, but they clawed their way back at Old Trafford: once again Bedser (11 for 93) was the wrecker-in-chief, but Ranga Sohoni and Dattaram Hindlekar (the No. 11 batsman who had opened batting with Merchant in the Lord’s Test 10 years back) managed to save the Test after India were 9 down.

Day One: A dampener

Having won the rubber England brought in two debutants in the form of the Kent wicketkeeper Godfrey Evans and the Essex leg-spinner Peter Smith. It rained incessantly till 1 pm on Day One, and play was virtually ruled out. Wisden wrote: “It was doubtful if play would have been attempted even at five o’clock on Saturday but for the crowds of people who waited around the walls from early in the morning.”

Pataudi won the toss and elected to bat, and with Mushtaq Ali — Merchant’s partner-in-crime from a decade earlier — being asked to open batting, things looked a lot more under control. For once India managed to smother Bedser. Neither he nor his teammates could break through, and India finished Day One at 79 without loss in 90 minutes of play. Merchant remained unbeaten on a dogged 30 while Mushtaq managed to score 48.

Day Two: A hundred and a kick

With two days left in the match Merchant and Mushtaq showed a sense of urgency in their approach. Mushtaq reached his fifty and then attempted a tight single; Laurie Fishlock made a brilliant throw to break the stumps and Mushtaq fell short. He had scored a strokeful 59, and India were 94 for 1 after 110 minutes.

This was followed by a mini-collapse as India lost Pataudi, Lala Amarnath, and Vijay Hazare in quick succession and slid to 162 for 4, but Rusi Modi batted stubbornly before he became Smith’s first Test wicket. Abdul Hafeez (later Kardar) came and went, and eventually Merchant was joined by Vinoo Mankad.

Merchant was, of course, in complete control. As The Glasgow Herald wrote: “Alone of his side he seems able to build up a long score with a deft touch and unwavering concentration; alone of his side he is a genuine all-round batsman with an answer to every type of attack under all conditions — including spin bowling on a slow wicket.”

He went past his hundred. He hit 12 boundaries in all – most of them coming from well-placed pulls and that trademark late-cut. Along with Mankad he shifted a gear and the runs kept coming. Then, with his score on 128 and India on 272 for 6, the incident occurred.

Mankad pushed the ball to mid-on. Merchant set off for a single that was turned down by Mankad. Merchant was too slow in turning around and making his way back. The situation was not new for Compton: the ball was under his control; he knew Merchant was never going to make it; the knee bended a bit and the boot came down, quick as a flash, kicking the ball and hitting the stumps with pinpoint accuracy.

“Compton, running behind the bowler at mid-on kicked the ball on to the stumps in a style that belonged more to Highbury than The Oval,” wrote Mihir Bose wrote in A History of Indian Cricket.

For once the phrase “an amazing display of footwork by Compton” sent out the wrong meaning on cricket field. The Bombay legend seemed infallible till then, and Compton’s kick was perhaps the only way he could have got out. The Glasgow Herald reported: “His 128 has an overwhelming logic about it and a mastery which suggested the certain flow of the rising tide. It was the fitting culmination to a great season’s batting by a great cricketer.”

Merchant and Mushtaq provided the second instance of both openers being run out in a Test innings; Archie MacLaren (67) and Tom Hayward (90) had both been run out in the Adelaide Ashes Test of 1901-02.

Mankad and Sohoni added 41 for the eighth wicket before India were bowled out for 331. Bowling fast and straight with the occasional deft off-cutter put in the mix, Compton’s “Middlesex twin” Bill Edrich picked up 4 for 68.

Pataudi used the heaviest of rollers available to him and fell back on his main bowlers, Amarnath and Mankad. Mankad had Cyril Washbrook caught brilliantly by Mushtaq at short-leg, and trapped Hutton leg-before with a straight delivery that kept low. At this stage Mankad’s figures read 9-4-9-2 and England were in trouble of sorts at 55 for 2.

Merchant then took an outstanding catch at deep square-leg to dismiss Fishlock off CS Nayudu. Compton and Wally Hammond, however, batted out till stumps, finishing on 24 and 9 respectively. England reached a painstaking 95 for 3 in 50 overs.

Incessant rain ruled out any play on the last day of the three-day match, and the Test was declared a draw at 1 pm.

– Merchant finished the season with an amazing 2,385 runs at 74.53 from 26 matches with 7 hundreds. He would be named an Indian Cricket Cricketer of the Year in the inaugural season of the award. Unfortunately, he would play only more Test – against England at Delhi in 1951-52. He scored 154.

– Injury kept Compton out of the 1946-47 season but he later helped Arsenal lift the FA Cup with a 2-0 victory over Liverpool.

Ashes 1975: Vandals force the abortion of a thriller at Headingley 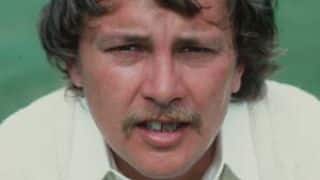