Derick Narine: A talent USA cricket should look to nurture

Derick Narine: A talent USA cricket should look to nurture

Narine has moved to the USA for better opportunities and has continued to play cricket.

Cricket is in its nascent stage in mainland America. In that part of the world, a talented young cricketer is like gold dust. Derick Narine, the all-rounder from John Adams School of New York, is one. He was recently in India where Sandipan Banerjee caught up with him and talked cricket.

“Excuse Me sir, can you please tell me which team is this?” I encountered this question from local cricket enthusiasts many times recently when I was accompanying the USA Under-19 cricketers in the distant places of Gujarat. Inquisitive faces were visible at the ground during their games and for those people these young American cricketers were nothing less than any other white foreign cricketers.

Like these curious fans, I was also curious to meet a player called Derick Narine. I had heard a lot about this Guyanese all-rounder. When I got to know he was in India for a cricket tour, I could not resist myself to travel almost 200 kilometres to watch him playing.

Narine was representing the USA Cricket Academy, which was on an 18-day tour of India (Gujarat, to be specific) and he had already grabbed headlines in local media for his flamboyant performances. His unbeaten 45-ball 102 assisted his team to earn a huge win against Shree Swaminarya Gurukul Vishwavidya Pratisthanam XI and earned him a lot of respect in the local cricket fraternity.

On my second day on the tour, at Valsad, I finally got the opportunity to talk with this youngster. Just after taking a four-wicket haul against a strong Valsad team, he came to have a chat with me.

“So, you are form Mumbai, maan, I really wanted to go there, heard lot of good things about that place,” the 17-year old said in typical Guyanese accent. His family had moved from Guyana to New York just a year back in hope of securing him a better education, which probably explained why Narine was yet to pick up the American accent. But on a cricket field this teenager has already broken many American records.

“I made lot of runs in school cricket. Those school tournaments on the matting wickets were not very challenging. Maan, I have played for Guyana in top level cricket and scored runs. So I hope you are getting me,” he said quite casually.

Narine comes from a typical modern generation of West Indian cricketers. He bats at the top, bowls medium-pace with new ball and also at the death overs. In other words, he is cut out for limited overs cricket. USA national selector Wesley King and USA Cricket Academy head coach Linden Fraser had lots of good things to say about this talent. For King, Narine is ‘one of the best in the country,’ but he was not sure whether USA cricket can get his services in future or not and so is Narine himself.

“If I get a contract back in Guyana, I will be more than happy to accept it. Back there I played alongside Devendra Bishoo, Tagenarine Chanderpaul, and Kevon Cooper and performed as well as them, if not better. I was even expecting a contract this year itself but, they eventually chose Tagenarine,” there was some disappointment on his tone this time.

My inquisitiveness got the better of me and I just asked him, “Have you ever faced Sunil Narine?” “No maan, but I would love to,” came the response.

Just before padding up, he threw a question toward me out of the blue — almost what Ravi Shastri would have called a ‘Tracer bullet’: “Do you know how to get into any of the IPL [Indian Premier League] teams? Will they take me or should I try for CPL [Caribbean Premier League] first?” I suggested the latter as the better option.

Lack of professionalism and money are hurting USA cricket badly. They just cannot lose talents like Narine. It is time for the administrators to take control and preserve them for the sake of American cricket. 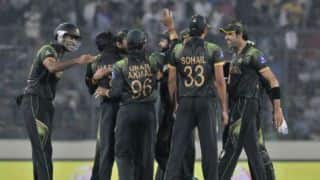