When the selectors left out the experienced Kulasekera to draft in the raw Prasad, a few eyebrows were raised.

Sri Lanka were pushed to the brink of defeat by the English. Then the batting turned around a la Lord’s 2006. Then Dhammika Prasad took over. Abhishek Mukherjee looks at the man who has possibly put England out of contention at Headingley with a fierce afternoon burst.

Had his Test numbers been as imposing as his name, Kariyawasam Tirana Gamage Dhammika Prasad would have had few competitors in the world of cricket. Unfortunately, fans and critics and statisticians and selectors and coaches tend to go by averages and strike rates, which made Dhammika Prasad look rather pedestrian: a tally of 22 wickets from 12 Tests at 59.00 and a strike rate of 82.7 (and a below-par economy rate of 4.27 to boot) did not really speak very highly of him.

Thus, when the selectors left out the experienced Nuwan Kulasekera to draft in the raw Prasad, a few eyebrows were raised. Sri Lanka scored 257; Angelo Mathews brought him on second change; he found the edge of Alastair Cook, but the frequency of finding the edge of Alastair Cook comes second in the list of cricket-related incidents these days, the first being one-liners on Ashoke Dinda on social network.

But let us not digress here. This is about Dhammika Prasad. He finished the first innings with a rather pedestrian one for 75; a splendid rearguard action from Sri Lanka’s big two — Kumar Sangakkara and Mahela Jayawardene — followed by yet another Mathews special (with Rangana Herath, of all people, as his aide-de-camp), left England to score 350 on a flat pitch; their other option was to survive for four sessions.

This time Mathews brought on Prasad third-change. England reached 39. Then Prasad found Cook’s edge yet again, this time the inside one: and the ball crashed on to the stumps. The Sri Lankans celebrated, but then, Cook — given his current form — was never going to be a major threat to the tourists during this chase. Out walked Gary Ballance, fresh from his hundred the previous Test.

Then came the screamer — arguably the best ball of the Test: the ball swung into Ballance late, and hit him low on the pads. Perhaps the only consolation Ballance could take from the dismissal was the fact that the stumps stood firm: he got away with a mere leg-before. A golden duck for the new Jonathan Trott. Prasad had taken two in his first four balls.

Then came the bouncer to England’s new-found hero, Sam Robson. The batsman ducked. The next one was on a good-length, just outside the corridor. Robson shouldered arms. The next one was an encore, only slightly wider: Robson went for it (was it the aggressive Australian in him?); Prasad had moved it slightly away from his body, and Jayawardene made a difficult catch look easy at second slip.

But then, then still had Ian Bell and Joe Root, England’s most composed men under pressure. Prasad bowled four deliveries outside off-stump in his next over. Root and Bell saw them off. Bell was on strike in the next over as Prasad ran in.

The first ball was on a length outside off. Bell knew it would leave him, the way the last two balls of the previous over had. He shouldered arms, and realised — a fraction of a second late — that he had been tricked: the ball came in sharply and knocked out Bell’s off-stump.

England were in tatters at 52 for four, but Prasad was not through. Having run out of steam, Cook gave up the idea of chasing, and sent in Liam Plunkett to play out the night. Prasad pitched the first ball up, up they went in unison, and Billy Bowden put up his telltale hook.

However, Plunkett went for a review, and was saved. Two balls later Mahela dropped (yes, you have read that right) Plunkett at second slip. Three balls later, Root tried to leg-glance one, only to find the big gloves of Dinesh Chandimal: yet another appeal, yet another nod and hook, yet another referral, and yet another life.

It was a short burst: five overs, 11 runs, four wickets. It was also the career-best figures of tall, muscular, burly, apparently harmless, overlooked, sidelined, perpetually underperforming Dhammika Prasad. It may or may not alter his career or life. But for that one evening at Headingley, he had taken centre stage on the world of cricket.

Whatever happens from here, nobody can take that away from him. 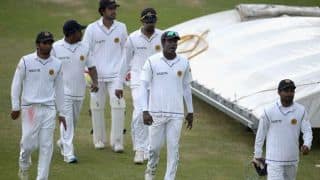