Dhoni's struggles in batting,keeping and captaincy has affected the Indian team. 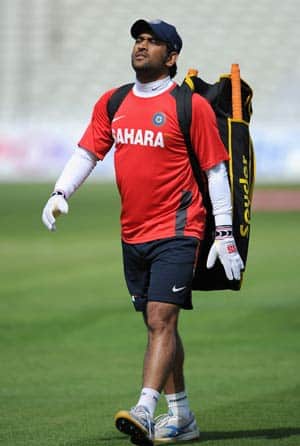 Mahendra Singh Dhoni finds himself in a crater of problems. The England tour has delivered a hard blow that has knocked down his victorious charge. The hard realities of sport have come alive after a prolonged run of success, both as a player and as a captain. The Indian captain finds himself in a muddle like never before. Wanderers 2007, Brabourne 2009, Wankhede 2011, etc. seem to be long-lost memories. Dhoni’s character as a player and as a captain is being put to test in this difficult period. These hurdles need to be crossed but for that he needs to return to his top gear and make amends to his current performances.

There are three sides to Dhoni as a player – the batsman, the wicket-keeper and the captain. However, he has been poor in all the three departments and that has affected the Indian team dearly. As a batsman he has looked tentative and overcautious – in sharp contrast to his personality. His wicket-keeping has been scratchy and drifted towards mediocrity. And “Captain Cool” seems to have lost his Midas touch; some of his on-field decisions have been very questionable.

In this article, we shall have a look at all the three aspects of Dhoni’s personality as a player, analyse his failures and look at what he needs to do to get back to winning ways.

The signs of Dhoni’s struggles with the bat were somewhat evident around this time last year. When India toured Sri Lanka in July-August 2010, Dhoni had a relatively quiet campaign when compared to the high standards he had set earlier. He scored a fifty each in the Test and the ODI series and that was the start of his inconsistent run.

His inconsistency continued against New Zealand at home and in South Africa but it only hogged the attention during the World Cup. However, all of that was forgotten after he played the match-winning knock in the final. All was forgiven as the most important mission was accomplished.

The indifferent form continued into the England series as he failed to make a mark in three of the four Tests. He has looked very tentative in his approach and there seems to be some hesitation in his stroke-making. At Edgbaston, he took the attack to the bowling and that helped him break the barriers in his mind. He played good cricket shots and wasn’t reckless in his strokeplay. However, the same old tentative prodder walked out to bat at The Oval and it made one feel as if he was back to square one.

It is likely that he has started to feel the burden of responsibility which has affected his batting. However, Dhoni is known to be someone who has a very calm head on his shoulders and doesn’t let anything to affect his thinking. But, his body language and performances speak otherwise.

To revive his form he needs to bat the way he did at Edgbaston. He was ready to put pressure on the bowlers and make them think with his attacking display. His mind looked uncluttered and he needs to regain that mindset so that he can get back to consistency. There would be responsibility but he should tell himself that he has handled it very well in the past with aggression and a positive attitude.

When Dhoni burst on to the scene in 2004-05, most people spoke about his bravado with the bat and his long mane. His wicket-keeping was something that never attracted much attention; he wasn’t considered very good at that.

Somewhere around 2007-08, there was a marked improvement in his glovework. He looked more assured and confident in his takes and also developed the ability to make the quick, smart stumpings while standing up to the stumps.

But in the ongoing tour of England, Dhoni has been abysmal behind the stumps as he has missed some easy takes and a few possible chances which could have made a huge difference to the game. Paul Nixon, the former England wicket-keeper believes that Dhoni’s hands are sore and that has prevented him from putting in his best on the tour. Nixon added that “It (the soreness) isn’t going to go away without rest. Sometimes we are keen on artificial rubber-band kind of strip on fingers, but then you lose the feel of the ball. It’s cumbersome on hands.”

One must acknowledge that Nixon has a point as Dhoni has been on the run since the South Africa tour late last year (the only assignment he missed was the West Indies ODI series). However, there is no respite for him as the calendar is full of cricket in the coming months. Thus, Dhoni would have to make a few tough decisions and chose to rest from a few games so that his body heals and is fully ready to take on the rigors of international cricket. More importantly, the Board of Control for Cricket in India (BCCI) needs to realise that the players are human and not machines. They need to make schedules for their players and not for their pockets.

During the ICC World T20 2007 semi-final between India and Australia, the commentator Ian Chappell said: “Well, India are playing in the personality of their captain – that is, no-fear cricket.” Be it giving the ball to Joginder Sharma for the last over of the World T20 final or promoting himself for the World Cup final, Dhoni has shown guts and fearlessness as a captain.

The Dhoni on display today seems to be a lot more defensive and clueless as far as the proceedings are concerned. On many an occasion in the Test series, it was puzzling to see him place fielders in the deep when they should have been in attacking positions. His reluctance to drop a struggling Harbhajan was baffling to say the least. The worst part was his statement at the end of the series when he said that his team tried their best. It just indicated that he had gone into a shell as the usual straightforward Dhoni would have accepted that his team was poor.

It is a well-known fact that the confidence of a captain rubs off on the team. If the captain is brave and fearless, the team feels confident and up for the challenge but if he possesses a defensive mindset, mediocrity begins to spread in the ranks. Dhoni needs to come out of his shell and be the same captain who tossed the ball to Joginder and promoted himself on the biggest stage. The fearlessness that defined his captaincy should permeate through the team and should bind them to put in aggressive displays. A change in his attitude will certainly help the team!

If Team India have any chance of making amends in the one-day series, Dhoni would be the talisman. The three aspects of his personality need to bond in his mind for a collective cause called victory. Be it Mahatma Gandhi or Nelson Mandela, great men have always said that change needs to come from within. Dhoni needs to bring in that change to revive his fortunes and turn the tides in his favor. Everybody goes through tough times, but only the mentally strong emerge victorious.