MS Dhoni played the innings of a lifetime and seized the initiative on the third day of the Chennai Test against Australia. Arunabha Sengupta looks at his achievement and wonders about the sanity of those who questioned his technique in Test cricket. 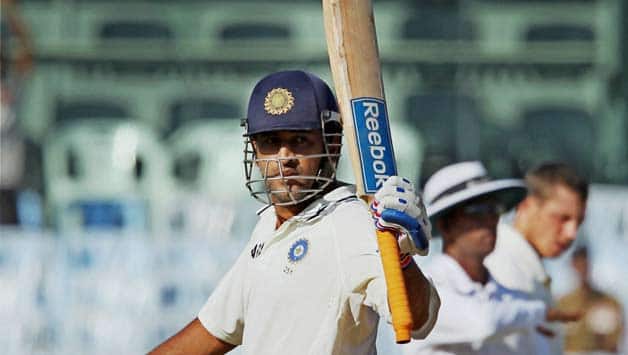 MS Dhoni played the innings of a lifetime and seized the initiative on the third day of the Chennai Test against Australia. Arunabha Sengupta looks at his achievement and wonders about the sanity of those who questioned his technique in Test cricket.

There were men — supposedly honourable and wise — who claimed that MS Dhoni did not possess the technique to play Test match cricket.

There were many who used the chic sounding cliché — “he is past his sell-by date.”

There were plenty who went by the image of a brash hitter — steadfastly refusing to allow numbers to cloud their perceptions, clamouring continuously that he did not merit a place in the Test side as a batsman. That he was too unimaginative as a captain.

Mahendra Singh Dhoni did not respond with words. In his characteristic way he let the tongues wag and kept doing things his own way — which infuriated his baiters even more. And when the moment arrived, he allowed his bat to answer, loud and eloquent, in a roar that will reverberate for quite some time to come. His critics will go through the usual task of rationalisation and memory loss but will have to wipe the generous portions of egg dripping from their faces.
Like none before

After the assertion of a disgruntled ex-selector that Dhoni did not have the technique to play Test cricket, the Indian captain batted through a complete day of the Nagpur Test that followed, scoring 99 on one of the most difficult of pitches and a high-class spin attack.

And now, in the following Test, he came in with the match balanced on a razor’s edge and proceeded to play the innings of his life. He has almost bludgeoned Australia out of the game through four and a half hours of brutal dominance. He is currently unbeaten on 206, which includes more than a hundred in the final session.

It is a trifle difficult to believe that a person convincingly written off by various experts as one not possessing the technique to be a Test match batsman should score a century against Australia, let alone a double hundred.

What else is surprising?

Well, at the end of the day the man stands on 4089 runs at 40.08, with six hundreds. If those are the figures of a man who does not have the ability to bat at the highest level, while donning the ’keeping gloves as well, then we have to redefine the rules of reason and mathematics.

Records lay in rubble in the face of Dhoni’s sensational assault. He notched up the highest ever Test score by an Indian wicketkeeper and became only the seventh wicketkeeper to score Test double hundred. It was the highest score by an Indian captain against Australia, and right now he is standing on the verge of rewriting the record for the highest score ever by an Indian captain. He also went past the landmark of the most runs scored in a day by a wicketkeeper — the only one to score more than two hundred in a day’s play. He also became the third Indian to score a hundred in the final session of a day and the sixth to score more than hundred in any session. In the course of the day he also joined Sunil Gavaskar, MAK Pataudi and Sachin Tendulkar as Indian captains to notch up double hundreds.

He is also on the brink of overtaking Mohammad Azharuddin and becoming the second highest run-getter for India as captain, the only man in front of the two being Sunil Gavaskar. He has led India in 44 matches, while Azharuddin and Gavaskar captained in 47 each, and Sourav Ganguly 49.

Taking all Indian captains into consideration, Dhoni is behind only Sachin Tendulkar and Gavaskar in terms of batting averages. Yes, Tendulkar, in spite of a considerable performance drop as captain, still has the best batting record among all men to have led India. And difficult though it may be to digest, his technique being placed under the scanner and all that, Dhoni has a better batting average as captain than Rahul Dravid. Let us not forget that Dhoni is also a wicketkeeper, and a very capable one.

Indian captains with more than 1000 runs

If one can achieve these feats without an adequate Test match technique, the question that arises is whether such technique is really all that important. In fact, it leads one to wonder who one would like in the lower middle-order: A man with fantastic technique or Dhoni?

Is technique really an issue, or is it vague enough to play on perceptions and raise questions about ability where none exist?

Is there another wicketkeeper in India who can score runs with anything approaching this sort of regularity? In this country, a wicketkeeper batsman had for long remained an unfulfilled dream. In that context, it is an unending surprise that Indian cricketing fraternity can even question the credentials of Dhoni.

A look at the table below highlights the unprecedented value he has brought in the history of Indian cricket.

True, he does not have great numbers overseas, but that can definitely be rectified down the line as he starts to take himself more seriously as a Test match batsman. Let me quietly interject here that his overseas average of 33.48 is in fact better than some established batsmen — Dilip Vengsarkar being one of them.

And while his performance in Australia has been pretty ordinary, he scores at 39.00 in England, considerably difficult if one does not have a suitable technique.

His figures in South Africa can do with some improvement, but has made runs there at 31.44. The number is not so ordinary when one considers that the illustrious Rahul Dravid managed to score at just 29.71 in that country.

However, along with answering his critics with the bat, Dhoni also served some important notices about his ability to read the game and take decisions.

The day witnessed an enthralling battle of wits as Michael Clarke dried up the runs by refusing to place slips and putting men in front of the wicket to cut off the drives and pushes. The plan was both superlative and bold. An edge through the vacant slip area would have brought all ex-cricketers and journalists snapping at the heels of the Australian captain. But, the ploy seemed to pay off, and India were struggling at 196 for four, after a rather run-less period. When Dhoni came in, Sachin Tendulkar had just fallen in an effort to break the shackles. The game was wee bit in favour of the visitors.

Dhoni’s counter attack in these circumstances was brutal and executed to perfection. While the six over mid-off will continue to send shivers down the spine of Moises Henriques for a number of years to come, it will also go down as an audacious triumph of strategy. The Indian captain picked the bowlers to hit and the spots to hit them with aplomb. And when the ball was new and hard, he shrewdly capitalised on it to plunder a flurry of boundaries, snatching the initiative briskly and surely out of the grasp of Australia.

Dhoni’s brilliance was also marked in the way he went after each bowler starting a new spell. The shots were adventurous, but carefully calculated, the risks weighed with a lot of thought. Even the stroke that brought up his double hundred followed the same method. The best part was seen after Harbhajan Singh departed, playing that atrociously irresponsible stroke. Dhoni batted with Bhuvaneshwar Kumar with a poise that was truly exceptional. The singles were turned down or taken with absolute control over the situation. While experts were engaged in trading conflicting opinions about the necessity for Dhoni to farm the strike or not, the stand crept along smoothly to be worth 109 by the end of the day. This truly brings out the essence of Dhoni. There may be theories that put his approach towards the game in dubious light, but generally the way followed by this ice-cool leader ends up with the correct results to show in the bottomline.

All in all, it was a superlative day of Test cricket which showcased the value of a MS Dhoni the captain and ‘keeper-batsman. Hopefully this innings will allow him to take the reins firmly in hand and steer the side through the phase of transition and rebuilding, right back to its winning ways.

After this knock he can perhaps do so without having to deal with the ridiculous critics of his batting technique. 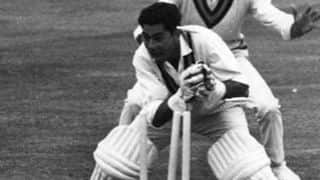 Farokh Engineer: Flamboyance personified on either side of the stumps