There is a clamour that Dhoni should have taken the singles in the last over and given Rayudu a shot.

Did MS Dhoni make critical errors during the run-chase in the T20 International against England? With 17 needed off the last over, Dhoni smashed a six off the first ball. Thereafter, he denied two easy singles as things got tighter. Ultimately, India were beaten by three runs as the Indian captain failed to pull off the usual magic. Nishad Pai Vaidya writes about Dhoni’s tactic that failed this time.

With 17 runs needed off the last over and MS Dhoni on strike, on most days you would have backed India to get home. But law of averages catches up with the mightiest on a level playing field and the most reputed finisher too can fail on the odd occasion. The question remains: did Dhoni make a few critical errors in this run-chase? Ambati Rayudu, a specialist batsman, was at the other end as Dhoni denied two singles in the last over. India’s ultimate margin of defeat was three runs.

Dhoni is almost unanimously the best finisher in limited-overs cricket and gets them right more often than not. The only other occasion in recent memory where Dhoni failed to pull it off was against New Zealand in a T20 International at Chennai in 2012. Chasing 168 for victory, Dhoni walked in at 120 for three in the 14th over, with 47 needed off 40 balls. Dhoni ambled to 22 off 23 balls and India fell one run short. In the last over, they needed 13 and though Dhoni hit a four early in the over, he wasn’t able to keep strike then and the game slipped away.

This time, there was a contrasting scenario on show at Edgbaston. Dhoni seemed more proactive and was trying to smash the bowlers. He did get a boundary in the penultimate over and was deceived by some good bowling from England. Harry Gurney bowled two excellent overs at the death and is an unsung hero of this England victory. One must give him credit there for strangling the Indian run-chase and sending it through to the last over.

There is a clamour that Dhoni should have taken the singles in the last over and given Rayudu a shot. In keeping the strike for he showed confidence; had he been successful, the world would have admired him profusely. Of course, Rayudu had played a couple of dots in the previous over and did not have the best strike rate during his stay in the middle.

But, Rayudu being a specialist batsman, Dhoni could have shown the confidence in his man to take them through. Rayudu is no stranger to such circumstances as he once hit a six off the last ball to win a game for the Mumbai Indians. Earlier this year, he hit a six in equally tense circumstances in a crucial clash against the Rajasthan Royals.

Compare that to the T20 International against New Zealand. Dhoni had handed the strike to Yuvraj Singh, the man at the other end. In that game, Yuvraj did look in good touch and had essayed a few big shots. And, India had failed to get across the line then with Rohit Sharma facing with four to get off the last two. Perhaps that thought may have lingered in his mind this time and he may have felt he was India’s best chance of getting the victory.

On other occasions as well, Dhoni has kept the strike for himself in the last over, but that was when a tail-ender was at the other end. As a commentator pointed out, Ishant Sharma, the No 11, was with Dhoni when he smashed Shaminda Eranga in the last over during the tri-series in the West Indies last year. If one goes back further, Ravichandran Ashwin was with Dhoni when he famously smashed Clint McKay for a six down the ground at the Adelaide Oval in 2012.

So, what should be the final verdict? It has to be a very balanced one. Rayudu could have been given strike in the last over. Dhoni’s tactic failed in that respect even though his teammate did not inspire the same confidence a Yuvraj Singh or a Suresh Raina would have. This defeat may well be forgotten — like that game against New Zealand — once Dhoni seals a victory or two in the last over in the near future.

Of course, let us not take the credit off Chris Woakes! One must remember that Dhoni had hit him for a six off the first ball. Yet he had bowled magnificently to deny him more opportunities to clear the ropes. Such is the stature of Dhoni that even in failure that he can eclipse a good performer! 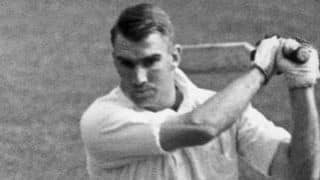