Djokovic vs Nadal final & Indian cricket's surrender Down Under: A study in contrast

Djokovic vs Nadal final & Indian cricket's surrender Down Under: A study in contrast

Even if you don’t watch tennis, the figures 5:53 minutes might ring a bell for you. At least a few status Facebook updates or tweets from one of your friends would have raved about the epic Australian Open 2012 men’s singles final clash between Novak Djokovic and Rafael Nadal which lasted for nearly six hours! 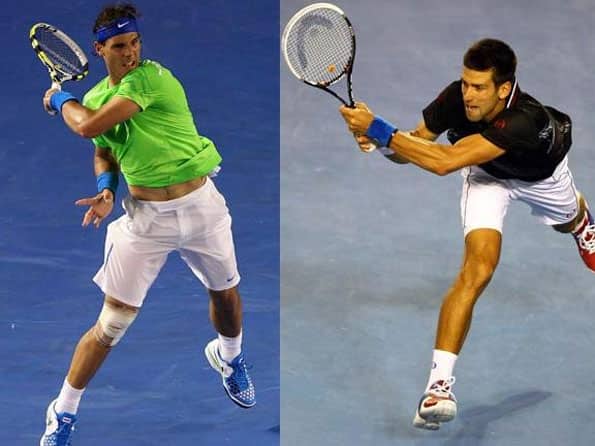 Rafael Nadal (left) and Novak Djokovic, two supremely-fit gladiators who turned the Melbourne Rod Laver Arena into a Rome-like coliseum in sharp contrast to the attitude and approach of the Indian cricket team. Virender Sehwag’s stay at the crease through the entire series barely touches seven hours! VVS Laxman fell short of eight hours on that count. Through eight Test innings, the time they spent at the crease was not much more than the duration for which Nadal and Djokovic played in one single match! © Getty Images

Even if you don’t watch tennis, the figures 5:53 minutes might ring a bell for you. At least a few status Facebook updates or tweets from one of your friends would have raved about the epic Australian Open 2012 men’s singles final clash between Novak Djokovic and Rafael Nadal which lasted for nearly six hours!  With dark humour about the Indian cricket team being the subject of most status updates, it was a pleasant change to focus on something positive. A little bit of background about the Australian Open.

The Australian Open is one of the four most prestigious tournaments in tennis. This championship, along with the French Open, Wimbledon and the US Open is known as Grand Slam. Drawing the best players from the world in a knock-out format across two weeks, a Grand Slam is as competitive as a World Cup.

The 2012 edition of the Australia Open partly overlapped with the 2011-12 edition of the Border-Gavaskar Test series that India and Australia played for. Having watched both sports from childhood, I couldn’t help observe the contrast between the tournaments. If India revelled in plumbing new depths match after match, Djokovic and Nadal, the No.1 and No.2 tennis players in the world respectively, set new standards for guts, athleticism and endurance.

Djokovic and Nadal didn’t just fight tooth-and-nail; they pushed themselves beyond the limit, harnessing energy from virtually every cell in their bodies. For the record, there has never been a longer Grand Slam final in tennis.

It wasn’t just about duration, though. Both players were going for the kill on every point and every rally. One has seen long tennis matches in the past where players slowed down in the closing stages and, amidst a slew of errors, hoped to tumble across the finish line before the other. Not Djokovic and Nadal! Some of the best tennis of the match was played in its closing stages. As the end approached, both players tried their best to thwart the other from victory – firing 200 kmph serves, 150 kmph winners and gusting out 20-stroke rallies. On a rough estimate, Djokovic ran nearly six km through the match, apart from striking the ball powerfully all the time, to emerge victorious.

And how does that compare with India’s dismal Surrender Down Under? Leaving aside athleticism, Test cricket certainly is about crease occupation and playing for time. But one perhaps needs to verify this observation with Virender Sehwag and VVS Laxman. Sehwag’s stay at the crease through the entire series barely touches seven hours! Laxman fell short of eight hours on that count. Through eight Test innings, the time they spent at the crease was not much more than the duration for which Nadal and Djokovic played in the title clash…a solitary match, that is!

You’d think that Djokovic and Nadal had a lot to play for if they were prepared to put their body on the line to win the trophy. Well, they did have a lot of money to play for and a Slam title is the most coveted of all. But here’s the best part: They have been there, done that already. Nadal and Djokovic have both won the Australian Open before. Sunday’s result wouldn’t have altered their rankings either. They are both gunning for massive records that may eventually seal their place as all time greats of the game. But they also played for pride, to prove they were the best and to prove they could not be beaten. They were playing tennis, but at the Rod Laver Arena, they came across like gladiators battling in a Rome Coliseum. So fierce was the intensity of their battle. The match was so punishing on the bodies of such supreme athletes as Djokovic and Nadal that they were almost unable to stand through the presentation ceremony and chairs had to be arranged to mitigate their pain.

Grace & Humility At The End Of It All

When this brutal and punishing contest was finally decided in favour of Djokovic, instead of anger and resentment, there was courtesy and grace. Djokovic gracefully acknowledged that either of them could have been the winner in  match as close as this and, even as he fought off the bitter taste of defeat, Nadal said he felt proud of being part of such a contest and of pushing himself to the limit for tennis. They both thanked the living legend Rod Laver for gracing the occasion with his presence. In fact, they basically thanked everybody who was part of the event: their support staff, parents, the crowd, sponsors, umpires, ball boys etc.

I wouldn’t want to recount the travails of the Indian team on this tour because I am sure you are in no mood to read it all over again. Suffice it to say that such character and such dignity were sorely missing in Team India’s display in Australia. What rankled more than the team’s defeats was they simply didn’t turn up for battle.

From the time spent by Sehwag and Laxman at the crease, one can gauge the spinelessness of the batting line-up. On the field, their shoulders dropped all too soon and they bided time like hapless prey waiting to be put out by the predatory Aussies.  The kind of untiring resistance that Nadal mounted to Djokovic’s challenge in a lost cause was conspicuous by its absence throughout Indian cricket’s surrender Down Under. The only time team members got some attention, it was usually for talking about the turners they threatened to prepare for Australia when they visited India.

India had more to play for than either Nadal or Djokovic. They have never won a Test series in Australia and this was touted as their best chance to set the record straight. But match after match, they were only making up the numbers, playing neither for victory nor for pride. After every match, the refrain from the Indian camp has been that they had practiced hard at home for this series and didn’t know where they were wrong.

The Australian Open 2012 men’s final should be specially screened for the Indian team.  Perhaps, they will find the answer there…in Djokovic’s belligerent fist-thumping gesture to propel his complaining body to soldier on.

(Madan Mohan is a 26-year old chartered accountant from Mumbai.  The writing bug bit him when he was eight and to date, he has not been cured of it. He loves music, cricket, tennis and cinema and writing on cricket is like the icing on the cake. He also writes a blog if he is not feeling too lazy at http://rothrocks.wordpress.com/)