Morne van Wyk, Cameron Delport and Reeza Hendricks all scored 150-plus in the same List-A match between Dolphins and Knights. Also the record for the highest partnership held by Rahul Dravid and Sachin Tendulkar in limited-overs cricket was broken.  Bharath Seervi highlights the records created and emulated in this match.

In the Momentum Cup match between Dolphins and Knights at Bloemfontein in South Africa, three batsmen made individual scores of over 150. They were Morne van Wyk (175*) and Cameron Delport (169*) for the Dolphins, who batted first and Reeza Hendricks (181) for the Knights. Dolphins’ openers, van Wyk and Delport remained unbeaten at the crease for the entire course of 50 overs, posting a total of 367 for no loss. It is the highest total for a team without losing any wicket in a List-A match. The Knights, in reply, scored 342 for seven in their 50 overs and handed a 25-run victory to Dolphins.

The right-handed van Wyk scored his 175 runs off 171 balls with help of 15 fours and five sixes whereas his left-handed partner Delport took just 130 balls including 12 fours and six sixes to get to 169 runs. Delport got to his century mark first, in 90 balls, just before his team reaching 200. Van Wyk got to his hundred run mark in 142 balls with no sixes till then. Van Wyk scored 75 runs in his last 29 balls that included all those five sixes. In the last ten overs, they scored 129 runs.

The 367-run stand is the highest partnership for any wicket in List-A cricket surpassing Sachin Tendulkar and Rahul Dravid’s partnership of 331 runs against New Zealand at Hyderabad in 1999. Reeza Hendricks shared a partnership of 275 runs with Rudy Second for the second wicket. It is the first time there were two 250-plus partnerships in a single List-A match. Hendricks got to his century in 86 balls and was at the crease until the 44th over. The team needed 74 runs in the last six overs, but fell 25 runs short and Dolphins won by 25 runs.

It is the first time in the history of List-A cricket three individual 150-plus scores were scored in a single List-A match. There are several occasions of two 150-plus scores in a List-A game, 12 to be precise.

Two individual scores of 150-plus in a List-A innings

It has happened twice in One-Day Internationals (ODI). First was by Sachin Tendulkar and Rahul Dravid against New Zealand at Hyderabad in 1999 and then by Hamish Marshall and Brendon McCullum for New Zealand against Ireland at Aberdeen in 2008.

Individual Scores of 150-plus by batsmen of both teams in a List-A match:

It was the seventh instance where at least one batsman from opposing teams played an individual innings of over 150 in a List-A match. The first such occasion occurred back in 1970 when Eddie Barlow and Graeme Pollock posted 186 and 169 respectively for their respective teams at Johannesburg. The next occasion was also at Johannesburg, but this time in an ODI, by Ricky Ponting and Herschelle Gibbs in the famous ‘434-game‘ 2006. The only other occasion in ODIs was by Charles Coventry and Tamim Iqbal in 2009.

Highest individual scores while chasing in a List-A match:

300-plus run partnerships in List-A Cricket:

Most 150-plus scores in List-A cricket:

The 175* run inning was Morne van Wyk’s fourth 150-plus run inning of his List-A career. Only Gordon Greenidge (6) and Sachin Tendulkar (5) have scored more 150-plus scores in List-A than van Wyk. 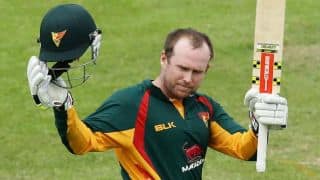