Another day in cricketing history dominated by the genius of Don Bradman.

At the start of the series, the new crown of captaincy had seemed to sit a bit heavily on his head. Gubby Allen’s Englishmen had begun the Ashes campaign with great promise after some ordinary tour games.

At Brisbane, Bill Voce and Allen himself had routed the Australians for 58 in the second innings and England had gone one up in the series. The Don had scored 38 and 2.

At Sydney, Wally Hammond had hammered 231. A duck by Bradman in a first innings Australian total of 80 had ensured a second easy win on the trot. England were 2-0 up after two Tests.

However, the great man could not be expected to fail for long. At MCG, Bradman came roaring back with 270, adding a world record 346 with Jack Fingleton for the seventh wicket in the second innings. The teams met for the fourth Test with England leading 2-1.

Another landmark for the legend

But, when on an easy Adelaide wicket, Allen bowled Bradman for 26 on the first day, and Australia managed just 288, England fancied their chances of securing the Ashes.

Chuck Fleetwood-Smith and Bill O’Reilly fought back with some excellent wrist spin, but the wicket refused to provide assistance. Charlie Barnett and Les Ames ensured that the Australian total was overhauled with ease. At 299 for 5 with Ames and Joe Hardstaff Jr at the crease, a big lead looked a distinct possibility.

It was not to be. Ernie McCormick got both of them and the spinners made short work of the tail. The lead was restricted to just 42.

Yet, when Hammond got Fingleton early, England were upbeat at the end of the second day. Australia had just gone past the lead and if they could knock over Bradman early on the following day, the Ashes was theirs.

Play resumed after Sunday’s rest on February 3, 1937. Bradman was not in his normal murderous mood of vanquishing bowlers. Captaincy seemed to have tweaked his methods marginally, cutting out some of the flourish. However, as a result, he looked more secure and impregnable than ever. And if Don Bradman looked more secure than usual, it was bad news.

Bill Brown departed at 88, but it was followed by one and a half hours of delightful association. Bradman and Stan McCabe put on 109 runs that sparkled under the Australian sun. Keith Rigg, coming in next, scored just 7, but by then Bradman’s authority had already more than established itself and the stand amounted to 40. When Rigg was gone, Ross Gregory proved to be an excellent ally.

England used as many as eight bowlers. Voce, Allen and Ken Farnes could not extract much pace off the wicket, and neither could Walter Robins and Hedley Verity make an impression with spin. Hammond put in some tireless overs with a lot of purpose but without results. Even Maurice Leyland and Barnett were asked to turn their arms over. But, nothing could dislodge Bradman.

With the Ashes at stake, dismissing Bradman was always near-impossible endeavour. And he knew the Adelaide Oval like the back of his hand. At the end of the day he was still there, unbeaten on 171. Australia were 341 for 4.

Gregory was run out on the next morning for 50, but Bradman carried on to score his second consecutive double-hundred. It was more due to fatigue that he finally surrendered his wicket, offering a return catch to his age-old rival Hammond to be finally out for 212. The Gloucestershire great then polished off the tail, picking up 5 wickets in an innings for just the second time in his Test career.

However, the target of 392 proved too much for England. Fleetwood-Smith routed them in the second innings with 6 for 110. The teams moved to MCG for the final Test with the series in balance. 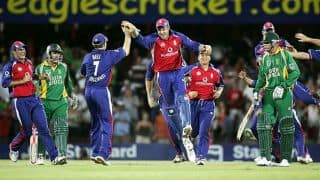