March 8, 1949, was the last day of the legendary Don Bradman's First-Class career.

On March 8, 1949, the Sheffield Shield match between South Australia and Victoria was completed. And with it, curtains came down on the career of the greatest batsman of all time. Arunabha Sengupta traces the last few playing days of the legend after his return from the victorious final tour of England.

The sun of the cricket world had gone down in its full glorious blaze.

On September 23, 1948, Don Bradman calmly packed his bags in Room 326 of the Piccadilly Hotel in London. The last item to go into his luggage was the latest of his innumerable trophies a silver cup from Mr Stanislaus A Santos of British Guiana, who had simply signed “A true Australian fan”.

As the rest of the team buzzed around in a chaos of unfound shaving brushes, mislaid shoes and un-ironed shirts, the captain calmly walked down to the lobby in a neat lounge suit. His Test career was over, but the perfection of his timing had remained intact.

When Bradman and his team left St Pancras by train for Tilbury to board the SS Ontario for home, hundreds of Englishmen waved after them, repeating the very words of HDG Leveson-Gower on the Oval balcony, “Well done, Don.”

The Times was evocative in its farewell piece: “To have seen Bradman at the wicket is to have enjoyed the precision of the art of batting. Larwood’s fierce attack and the cunning of Verity’s spin — and in the last chapters, Bedser’s patient industry — tested his almost inhuman quickness and certainty of reaction, but only to remind spectators that he was a miracle of flesh and blood and not a little robot under a long-peaked green cap. Arthur Shrewsbury used to say, when he went out to bat after lunch, ‘Bring me a cup of tea at half-past four.’ Bradman, but for the dusk that causes stumps to be drawn at the end of even the longest afternoon, could with equal confidence have ordered his dinner in advance to be sent out on to the field. At the top of his form there was no getting him out. Some baby now toddling after a soft ball in New South Wales may grow up to be the scourge of English Test teams in the sixties. Old stagers who then watch him piling up a century will be able, however finely he plays, to murmur: ‘Ah, but you should have seen Bradman.’”

The man himself summarised his swansong series as: “The grandest tour of all.”

When Bradman returned to Australia in October, he was ensconced as the national sporting legend, the biggest icon in the country. There were speculations aplenty. Some saw him as the Lord Mayor of Adelaide, some even as a future Prime Minister of Australia. While the great man was still sailing back, it was reported that he would be asked to stand as a Liberal Country League candidate in the 1949 Federal elections. However, when he reached Perth, The Don unequivocally declared that he had not been consulted and was not interested in entering politics.

Bradman quietly returned to his stock-broking business, and it was understood that he would not play any cricket at all — not even for his club Kensington.

There had been a fledgling idea of staging an Australia versus The Empire match at Melbourne to give him a fitting farewell. The possible participants were named as Len Hutton, Denis Compton, Godfrey Evans, Doug Wright, Dudley Nourse, Bruce Mitchell, Frank Worrell, George Headley, Vijay Hazare, Vinoo Mankad and Bert Sutcliffe. However, after some discussion, the idea was shelved as impracticable. Yet, Bradman did appear in three testimonial matches — his last three First-Class outings.

The first game Bradman played in was his own testimonial match, at Melbourne in December 1948. Before the start of the Don Bradman XI and the Lindsay Hassett XI game, he told the crowd that the happiest moment of his life had been watching 19-year-old Neil Harvey make the winning hit at Leeds. And when asked to pick a memorable incident from his own career, he mischievously talked about his first century as a 12-year-old for his school, when he had got into trouble for leaving a school bat in the ground.

The first testimonial game ended in a thrilling tie, with Bradman scoring 123 and 10. The opposition bowling comprised of Ray Lindwall, Bill Johnston, Len Johnson, Colin McCool and Bruce Dooland, but his mastery was supreme. This was his final First-Class hundred and was watched by a 53,000 strong crowd.

At 97, he skied a simple catch to McCool at wide mid-on off Johnston. The fielder juggled with the ball, allowed it to drop, and stared at it with what most believed was mock dismay. The Don ran three and completed his hundred. The crowd roared with laughter and the great man joined in. He gave his wicket away soon enough. The match produced £9,342 (Aus), and like everything else associated with Bradman, it was a record, breaking the £3,000 jointly held by Charlie Macartney and Jack Ryder.

On January 1, 1949, Bradman was knighted. It was the first time that a cricketer had been bestowed with the honour solely for his contribution to the game. On advice of his doctors, King George VI did not embark on his scheduled tour of Australia and New Zealand. Thus Bradman received the accolade from the Governor-General of Australia, the Rt Hon. WJ McKell at the investiture in Queen’s Hall, Parliament House, Melbourne, on March 15, 1949.

However, before he knelt on the red plush cushion to be touched on his shoulder with the traditional sword, Bradman had played his last First-Class match.

At the end of February, he played in the Alan Kippax-Bert Oldfield testimonial. Once again Bradman played against AL Hassett’s XI, but on this occasion, the side was led by Arthur Morris. This was the first time in a decade and a half that Bradman did not captain his own side. It was his final match at Sydney and the crowd swelled to 41,575.

Arthur Reed, one of the throng sitting in the stands that day, recalled, “Never have I experienced anything more dramatic than the silence after the fall of the previous wicket, the Roman roar when that tiny figure appeared in the pavilion door, the silence again as he took guard, and the engulfing uproar as the first ball went with meticulous precision to fine leg for two.”

Keith Miller famously sent down several bumpers to the great man — an act often considered to be the reason behind his initial non-selection for the South African tour of 1949-50. In spite of his 40 years and lack of match practice, Bradman swivelled and hooked with nimble footwork, engaging in a thrilling battle between bat and ball. He finally miscued a slower Miller delivery, and fell for 53. With just 62 to get in the second innings, he did not bat again.

The final match of his cricketing life was played from March four to March eight. It was on the turf of Adelaide, his adopted home, where he had not turned out since his return from the triumphant England tour. It was the Sheffield Shield showdown between South Australia and Victoria and the testimonial of Arthur Richardson.

Bradman, without any practice, scored just 30 in the only innings he batted, a startling anti-climax if we look at the monumental innings he had played all his career. A closer scrutiny of the scorecard however tells us that the rusty Bradman did in fact top score or his side. Against a strong bowling attack which included Bill Johnston, Doug Ring, Ian Johnson and Sam Loxton, South Australia was bowled out for 154 in response to the 229 by Victoria.

However, it was slightly tragic that in the second innings of Victoria, Bradman stepped on the ball while fielding and sprained his right ankle. Limping with pain, he had to be helped off the ground, and was never seen in First-Class cricket again. Victoria won the match by a big margin.

According to biographer Irving Rosenwater, “It was the cruellest irony that at the very last a sprained ankle, of all things, should befall the very man whose footwork had thrilled so many thousands.”

Ray Robinson put it eloquently, “Suddenly cricket was like a room with the light switched off.”

Bradman left the scene with 28,067 runs at that stratospheric average of 95.14. As RC Robertson-Glasgow put it, “No artist has more shrewdly understood and satisfied his public … he answered the craving of the multitude to an almost inhuman degree.”

Vivian Jenkins summed it up succinctly: “If WG Grace put cricket on the map, Bradman held it there and made it glow with incandescent heat. What a man, and what a record.” 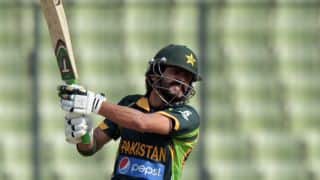 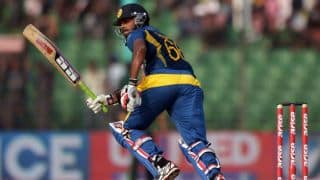 Pakistan vs Sri Lanka, Asia Cup 2014: Kusal Perera off to a good start