H Natarajan picks a fantasy World XI of January-born players who have left their mark in Test cricket.

H Natarajan picks a fantasy World XI of January-born players who have left their mark in Test cricket.

He scored doubled hundred on debut and followed it up with an unbeaten hundred in the same Test. In his ninth Test he got another hundred and in his tenth a brilliant 302 both knocks against England. The Jamaican raised great hopes with that kind of start to his Test career. But he played just 20 more Tests, ending with seven hundreds and seven fifties, as problems with his eyesight and an allergy to grass meant he had to end his career with unfulfilled potential and expectations.

The left-handed opener played just 13 Tests, but in those 13 appearances for England he scored three hundreds and two 90-plus knocks. In his final innings, he scored 137 his highest in Tests against an Australian attack that included the likes of Alan Davidson and Richie Benaud to exit with an impressive average of 46.86.

The right-left Rowe and Row opening combination can do enough to ensure that the bowlers don’t settle down to an easy line.

This legendary Indian batsman made the No 3 batsman a symbol of solidity in his highly decorated Test career. Of the 286 innings he batted in Test matches, he came in at one-drop on 219 occasions and scored 10,524 runs in this position with 28 hundreds. He was like Fort Knox for the team at the No 3 slot. Enough said.

With Everton Weekes and Frank Worrell, Clyde Walcott formed the famed Three Ws of West Indies cricket. A batting average of nearly 57 per innings from 44 Tests speaks of his stature as a world class bat. Of all the positions he batted, Walcott averaged his highest [78.43 from eight Tests] at the No 4 slot, which is where he will bat in this line-up. Walcott’s presence in the team gives the team the luxury of picking an additional batsman or bowler as he is also the wicketkeeper of the side.

He played 70 Tests, but two innings are enough to underline his prowess as a batsman: his 117 in the Centenary Test at Lord’s in 1980 and his 214 against India in the 1980-81 home series against India. His shot-production was of the highest order and he could have ended his career on a much higher note had he not become a victim of the antipathy he got from iconic players in the Australian team who came back from their allegiance to Kerry Packer’s World Series Cricket. Hughes was seen as an establishment man and he paid a price for that while leading Australia. It surely had an effect on his batting, but nobody doubted his class.

He took over the reins of the West Indies cricket from fellow-Antiguan Viv Richards. And like his legendary predecessor, Richardson avoided the helmet while batting, playing strokes with supreme confidence square on either side of the wicket. The Australians brought out the best in Richardson the batsman; nine of his 16 hundreds came against the Aussies.

The once world record holder for the most wickets in Tests comes in primarily as a new ball bowler. His destructive batting which brought him eight Test hundreds and superlative fielding are bonuses. The team has a number of players who have led their countries, but none that can be slotted in the mould of the great captains like Imran Khan, Mike Brearley or Ian Chappell. Under the circumstances, Kapil is the best bet a man who led from the front a bunch of no-hopers to win the 1983 World Cup.

Like Kapil Dev, he is picked for his prowess as a left-arm spinner which brought him 362 wickets more than any left-arm spinner in Test history. That he can bat is a huge bonus at No 8. Vettori bloomed as a batsman with passage of time to score six hundreds and 23 fifties.

The New South Welshman is considered by many knowledgeable as the greatest all-rounder produced by Australia. In 42 Tests between 1898 and 1909, he scored 1997 runs with one hundred and 16 half-centuries, and captured 121 wickets (avge 25.00) nine five-for in an innings and two 10-wickets in a match, with a best of 13 for 77. If those figures speak volumes of his prowess with bat and bat, consider his First-Class figures: 13,975 runs at 40.74 with 37 hundreds. Ten of those were double hundreds, with a highest of 284. Bowling medium-pace and off-breaks, he took 624 wickets (avge 23.14) with 33 five-for in an innings and seven 10 wicket hauls.

With both Kapil Dev and Monty Noble right-handed, Chaminda Vaas provides variety with his left-arm pace. Vaas served Sri Lankan cricket with distinction during his 15-year-long international career, in which he took 355 wickets in Tests and 400 in One-Day Internationals. That he is good with the old ball as well adds value to the worth he brings to the team. Having scored a Test hundred, 13 half-centuries, Vaas adds great depth to this line-up.

The South African is ranked among the great off-spinners the game has produced. The fact that he took more wickets per Test then either Jim Laker or Lance Gibbs underlines his class and productivity. His 37 Tests gave him a haul of 170 wickets with innings best of nine for 113 and match best of 13 for 165. Tayfield is the spin partner for Vettori. 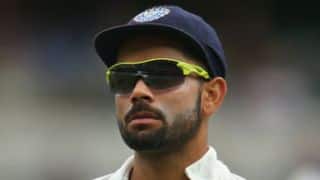