August 22. It was a hot, mildly humid day in Greater Noida, temperature around 33 to 34 degree celsius. The sun, not quite at its peak, but scorching nevertheless. It was around that time when the sounds of horns blowing near the roundabouts, the city’s very own trademarked landmarks, were much less noisier than the clamour of a hammer or the echoes of a marble polishing machine, coming from a nearby construction site. The city was busy in its routine, not knowing that it’s name was about to be written in history books. India’s first tournament to be played with the pink cricket ball, under lights, Duleep Trophy 2016-17, will begin at the Shaheed Vijay Singh Pathik Stadium in Greater Noida, from August 23. READ: Duleep Trophy 2016 schedule, squads, venue

Just as you cross Pari Chowk, a well-known landmark at the end of the Noida-Greater Noida Expressway, take a few turns and head towards a big resort, stands the venue, near a few other sports complexes. Once I entered, there was a different scenario to what I had seen before in my earlier visits. A sense of urgency in almost every worker and every in-charge; from the electricians and sanitation people, to the media in-charges and groundsmen can be easily noticed. And why not, time is less and there is a lot to still manage.

As I ambled towards the nets, I could spot a few young Indian cricketers getting ready for a practice session. Yuvraj Singh‘s India ‘Red’ squad had reached the stadium. Yuvraj had not though. They began with their warm-up routine. A few stretches and a few jumps & hops were followed by a quick game. It was more like handball, but they just passed a ball like object; not ball. Then it was time to hit the nets.

I stood under a tree shade, and quietly observed. Kuldeep Yadav and Murugan Ashwin, both young talented spinners prepared themselves to bowl at the batsmen. Yadav had played for the Kolkata Knight Riders (KKR) in IPL 2016 and had even earned appreciation for his bowling, from Yuvraj. Murugan Ashwin had played under the MS Dhoni-led Rising Pune Supergiants (RPS), and had impressed many as well. But this time, they had a shiny fluorescent pink ball in hand. READ: Mohammed Shami: Pink ball very bright; glows like radium

Soon, seamers Anureet Singh and Ishwar Pandey started steaming in as well. Gurkeerat Singh Mann, then put on his pads and started batting. All three nets were now producing that ever-lovely sound of the ball hitting bat. And just as I started watching closely, appeared Yuvraj, with sunglasses on, in a bright neon green sports T-shirt, his trackpants up to his knees, approaching the area which the team had been allotted, in his white flip flops. His walk, casual; as casual as you would associate with Yuvraj.

He shook hands with a few, then changed his gear, wore his shoes and started warming up. It must be noted here that, that at 34 years of age, Yuvraj does realise that he is now more injury prone. And therefore, he puts a lot of emphasis on his warm-up routine and his own set of exercises. He put in at least 30 minutes on his stretching, bending and flexibility workout. I watched every second of it, while the rest of his squad continued their net session.

Amidst all this was Narendra Hirwani, the coach of the India Red team, observing, suggesting, and helping the young bunch of players with his experience.

When Yuvraj was done with his exercise routine, he asked one of his team-mates for a ball. “Ball diyo yaar”, he said. And just as soon as he gripped the pink ball in his hand, he decided to bowl a few overs. Somewhere in the back of mind, I perhaps knew he would bowl first. He had a healthy chat about the pink ball with Hirwani, probably discussed about its shape or shininess, or even about how it would help a spinner like him. Maybe, you could see him bowl when the tournament gets underway. READ: Dean Jones: Pink ball cricket will be reality everywhere

Soon he padded up, and had the bat in his hand. He defended a few, left a few, was beaten by some, and attacked some. Then he asked someone to throw fuller deliveries at him. He did enjoy middling those.

The arrangements were appreciable, especially for a new, developing stadium. The media was treated with care too. When asked about the expectations from the pink ball, and the hype around it, a ready-for-the-challenge Yuvraj said, “It is an exciting prospect, it’s new, we are also new to it. We saw in Adelaide between Australia and New Zealand, where the ball was swinging. We’ll have to see what happens.” READ: Yuvraj Singh, Suresh Raina excited for Pink ball cricket as Duleep Trophy 2016-17 gets underway

And while the talks around the pink ball and how Greater Noida’s pitch will turn out to be gather pace, while the world turns it attention towards day-night cricket in a small city which is still seeking to find its name on the world map, one thing is certain, the inhabitants will not let the administrators down. The stadium will see a huge turnout. The localites will enjoy the cricket for sure. Their might be no seats, but the attendance would surely be more than what you would have seen in the first Test between South Africa and New Zealand at Durban, this week. READ: South Africa vs New Zealand: Empty stands witness high-quality cricket on Day 1

The Duleep Trophy is obviously not about big teams like those, since it is a domestic tournament. But since it is a new concept, with an attempt to bring in more people to watch the longest format of the game, it is a huge event in the history of Indian cricket, but an even bigger one for cricket in Greater Noida.

The Greater Noida Industrial Development Authority (GNIDA) has done its bit. The UPCA has played its part as well. And the BCCI, has not only presented a wonderful chance for the city to impress and showcase its true potential, it has given the people a chance to witness history. If pink ball cricket will go to newer heights, it will begin from here.

Therefore, for the hosts, it is a chance to experience it first. It is an opportunity of a lifetime. It might well be a carnival. For Greater Noida, it is time to party! Party, day-night. 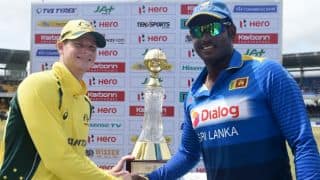