Overall, the team of North Zone looks stronger comparatively as that of the Central Zone.

The ongoing edition of the Duleep Trophy has already reched the knock-out stages of the tournament. As the semi-finals kick-off at Mohali and Rohtak from Wednesday, October 21; the intensity gets bigger and the adrenaline starts pumping high among the players involved in their respective zones. Ayush Gupta takes a look among the players to watch out for the first semi-final between Central Zone and North Zone scheduled to be held at Mohali.

Started in 1961 by the Board of Control for Cricket in India (BCCI), the Duleep Trophy tournament has been of giant importance to all the Indian cricket players, especially the ones participating in the Ranji Trophy for the just concluded season. With the increase in competition to draw the attention of national selectors for a spot in the national team or the franchise team for the Indian Premier League (IPL), the players love to give their best as they play for their respective zones on the basis of the Ranji teams.

Ishwar Pandey: He plays for Madhya Pradesh in the Ranji Trophy and Chennai Super Kings in the IPL. Being a fast-bowler, he has played 31 first-class matches, claimed 131 wickets with an economy of 2.88 and has a best bowling figure of 11 for 120 in a match. In 2013, he had a great run in the Ranji trophy and also became the highest wicket-taker in an unofficial Test series while playing for India-A against South Africa-A. His impressive performance has earned him the call for his zone and could draw the selector’s attention if he performs well in the tournament.

Anureet Singh: Plays for Railways in the Ranji and Kings XI Punjab in the IPL, the youngster has been impressive in the recent season. Being a medium-pace bowler, he has played 2 matches and has claimed 116 wickets with an economy of 2.75 and has a best bowling figure of nine for 160 in a match. He also recently played for India-A against Australia-A at Brisbane in July but failed to take a single wicket. However, owing to his good domestic performance of late, he is expected to fire in this match of the tournament and would have a keen eye at the Indian squad.

Kuldeep Yadav: India’s only Chinaman, the spinner’s impressive stint in the IPL and Champions League T20 (CLT20) with Kolkata Knight Riders (KKR) also earned him the national call in the ODI series against West Indies. He plays for Uttar Pradesh in the Ranji Trophy and has been a star in the T20 format having claimed 14 wickets in just nine matches with an economy of 6.13, giving away 221 runs with the best bowling figure of three for just 15. However, he is yet to play a first-class match and this could well turn out to be a good platform to prove he is worth of being in any team.

Gautam Gambhir: The vice-captain of the North Zone would be leading the team after regular captain Harbhajan Singh pulled out of the tournament due to viral fever. The Indian opener from Delhi has tons of experience with 158 first-class matches and scoring above 12,000 runs with an average of 49.92 which include 36 centuries and 53 fifties. He has been struggling of late with his form, but owing to his brilliant track record in the domestic circuit, he could well prove to be a costly asset for the team.

Virender Sehwag: The explosive Delhi-based Indian opener needs no introduction as the whole world knows him quite well enough. Although currently off-color and not a regular member of the Indian squad, he could still be a gem for any team, especially in the domestic circuit. With 180 first-class matches and above 13,500 runs with an average of 47.11 including 39 centuries and 51 fifties. No doubt he is the man to watch out for in any format and any game.

Yuvraj Singh: Another India’s swashbuckling middle order batsman from Punjab can destroy any bowling attack in any form of the game. With an impressive track record for India and having battled-out cancer recently, the 32-year old is still fresh and strong enough to take apart any bowling attack. Having played over 110 first-class matches with around 7,000 runs and an average of 44.07 including 20 hundreds and 32 fifties, he too has tons of experience behind him and can suit the game for the North Zone as a valuable asset and surely the man to watch-out for who has all-round abilities.

Overall, the team of North Zone looks stronger comparatively as that of the Central Zone. However, the five-time champions cannot be written off following their impressive stint in the previous editions and the young players who have come in are sure to pose a threat to the 17-time champions. 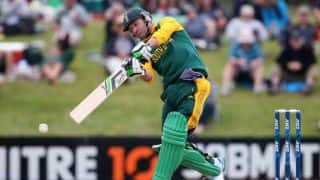 AB de Villiers: What gets me going is finishing games for the team