The 3-day Bombay Presidency Match 1895-96 between Europeans and Parsees began on a Thursday, September 26, but was completed the following day, the Parsees winning by an innings and 10 runs. The Parsees put the opposition in. The Europeans were all at sea in the 1st innings; they folded for 30 in 22.4 (5-ball) overs. The only man in double figures was Robert Poore (11), who would later play Tests for South Africa. The damage was done by Bamamji Billimoria (8 for 11 in 11.4 overs) without any help from the field, 7 of his victims being bowled and one caught and bowled. There were 5 ducks in the innings, while Lionel Deas remained not out without opening his account. The surprising thing about this innings was that though the 5th, 6th, and 7th wickets fell at the team score of 28, and the 8th, 9th, and 10th all fell at 30, there was no hat-trick in the innings, one man being run out. READ: Dadabhoy Havewala: First Indian to score 500 in a senior cricket match

The Parsees fared somewhat better, finishing on 112. Billimoria was the highest scorer, remaining not out on 32. Kekhashru Mistry scored 31. Harry Ernest Browne, with 7-2-20-4, was the best bowler for the Europeans. The 3rd, 4th, and 5th wickets all fell at 46, suggesting the possibility of a hat-trick.

There is an interesting observation in the match notes to the effect that BD Gagrat, one of the Parsee openers, had retired hurt on a personal score of 6 at the team score of 10 without loss, and had returned to the fray on the team score on 4 for 46. From all this, and the fact that the same match notes attribute a hat-trick to Browne in this Parsee innings, it seems reasonable to assume that the victims were BC Machhliwala (3), DC Daruwala (0), and Gagrat (6).

It was an epic event in the history of Indian First-Class cricket, Harry Browne becoming the first bowler to take a hat-trick on Indian soil.

To complete the story of this landmark match, it should be recorded that the Europeans were dismissed for 72 in the 2nd innings, Billimoria (5 for 38) and Dinshaw Writer (5 for 11) sharing the wickets, with Billimoria exhibiting wonderful all-round skills in the match. The ball, then, had been set rolling.

The Bombay Quadrangular Tournament 1912-13 included a match between Hindus and Parsees at Marine Lines Ground, Bombay. Hindus, led by KA Date, batted first. It might not have been a very good decision: they were dismissed for 64 in 28 overs, with only two men in double figures, Palwankar Vithal (22, top scorer) and HL Semper (12 not out). The Parsees used only two bowlers — JN Elavia (14-5-31-3) and MD Parekh (14-3-30-6).

It is stated in the match notes that Parekh had taken a hat-trick in the Hindus 1st innings, with the wickets of the debutant Thakore Saheb of Rajkot (4), Babaji Baloo (0), and Date (0), thus becoming the first Indian bowler to achieve a hat-trick in First-Class cricket.

The Parsees replied with 183, Jehangir Warden remaining not out on 115, and the next highest scorer being the legendary Hormasji Kanga with 15. For Hindus, the main wicket-taker was the aforesaid Baloo with 6 for 36. It was an uphill task for the Hindus in their 2nd innings, and they could only make 79. The wickets were shared by JN Elavia (4 for 22), Kanga (4 for 15) and MD Parekh (1 for 37). It was a morale-boosting win for the Parsees by an innings and 40 runs.

The following is a brief chronological survey of the next 5 hat-tricks in Indian First-Class cricket:

Harry Simms, September 9, 1915: Simms, the Sussex right-arm fast bowler, playing for Europeans, captured 4 for 2 in his 3 overs (2 maidens) in the Muslims’ 1st innings of 21 in 14 overs. This included a hat-trick with the wickets of Feroze Khan (8), Yusuf Baig (4), and Pyare Khan (0), all three wickets falling at the team score of 18. Simms made it 4 in 5 by adding the wicket of Nazir Hussain (0). There were 8 ducks in this innings of Bombay Quadrangular 1915-16, played at Poona — a contest Europeans ultimately won by an innings and 141 runs. For the record, Simms picked up 5 for 15 in the Muslims’ 2nd innings whilst Frank Tarrant, the itinerant Australian, had 5 for 6 and 5 for 9 in the match (he also opened the Europeans innings and scored 49).

Jagan Nath Mehta, March 20, 1924: Mehta, playing for Hindus against Europeans in the Lahore Tournament of 1923-24, picked up 5 for 40 in the Europeans’ 2nd innings of 178, including a hat-trick with the wickets of three debutants — Herbert Maynard (2), wicketkeeper Louis Carter (0), and Victor Wells-Cole (0). Carter was playing his only match. Hindus won the match by 203 runs.

Ladha Ramji, December 1, 1931: Ramji, playing for Freelooters against the Nizam’s State Railway A team in the Moin-ud-Dowlah Gold Cup Tournament 1931-32 semi-final at Secunderabad, captured 8 for 14 in the Nizam’s team’s 1st innings score of 31 in 16.1 overs. This included a hat-trick with the wickets of S Himayatullah (0), FH Amin, playing his only First-Class match (0), and wicketkeeper Ernest Burdett, making his First-Class debut (0). Ramji picked up 4 for 32 in the Nizam’s team in the 2nd innings as well, and his younger brother Amar Singh, with 2 for 14 and 6 for 59, ensured a victory by 4 wickets for Freelooters.

MJ Gopalan, January 8, 1933: Playing for Madras, Gopalan picked up 6 for 16 against Ceylon at Chepauk in a 1st-innings total of 72. This included a hat-trick with the wickets of George Hubert (0), Neil Joseph (0), and SS Jayawickreme (0). He made it 4 in 5 with the wicketkeeper Vernon Schokman (0).

Gopalan did even better in the 2nd innings with 7 for 57 as the Madras team won by 5 wickets. This First-Class contest between Madras and erstwhile Ceylon evolved into an annual event, and came to be known as the MJ Gopalan Trophy as a tribute to the cricketing skill and stature of the famous Madras cricketer. It was played between 1952-53 and 1982-83, and again in 2000-01, 2001-02, and, finally in 2007-08.

Mohammad Nissar, October 24, 1934: Playing for the Indian University Occasionals against at Delhi, Nissar picked up 6 for 47 in the Viceroy’s XI 2nd innings of 223. His His hat-trick included the wickets of his partner-in-crime Amar Singh (2), Thomas Dixon (0), and CS Nayudu (0).

CS “Father” Marriott, February 5, 1934: Marriott, a Kent and Lancashire leg-break and googly bowler and the only man to take a 10 wicket haul in his only Test, was playing for Douglas Jardine’s MCC at Chepauk during the their 1933-34 tour. Marriott picked up 5 for 43 in the Madras 2nd innings, following on. This included a hat-trick with the wickets of Ram Singh (2), Renshaw Nailer (0), and MA Uttappa (0), all 3 wickets falling at the team total of 120, out of 145.

Marriott had also taken 3 for 35 in the 1st innings. Having scored 603 in their only innings, and having dismissed Madras for 106 and 145, the visitors won the match by the massive margin of an innings and 352 runs.

The first Ranji Trophy hat-trick: The “Cricket Championship of India”, christened the Ranji Trophy, began in the 1934-35 domestic season as a contest between teams from the local cricket associations to determine the National Champions for the season.

The 9thRanji Trophy match of all was played between Southern Punjab and Northern India, at Amritsar. It was a strange, bowler-dominated contest in the sense that the four innings totals got progressively lower. Northern India, under wicketkeeper George Abell, opted for first strike. The 1st-innings effort realised 142, Muzaffar Baig top-scoring with 45. The second-highest scorer was Baqa Jilani with 35.

Southern Punjab, under the Yuvraj of Patiala, who scored a duck, managed 135 in response, Roshan Lal top-scoring with 29 not out. For Northern India, Baqa Jilani took 4 for 46. Northern India were then bowled out for 106 against Nissar (4 for 35) and Lala Amarnath (3 for 12). Abell, with 24, was the top scorer.

Following the trend, Southern Punjab were shot out for only 22 in their 2nd innings in 16.1 overs. It was a pathetic batting display, with 5 ducks and no one reaching double-figures, the highest individual score being 6 by Nissar, who batted at No. 10.

Once again, Baqa Jilani was the main bowler, with 5 for 7 on his Ranji Trophy debut. This included a hat-trick, with all 3 wickets falling at the team score of 8, the victims being wicketkeeper Joginder Singh (0), Yuvraj of Patiala (who collected a “pair” in the match), and Lall Singh, making his last Ranji Trophy appearance (1).

Baqa Jilani thus became the first bowler to take a Ranji Trophy hat-trick, and on his Ranji Trophy debut as well, a sterling performance from him. Till the end of the 2015-16 Ranji Trophy, there have been 73 occasions when a bowler has taken a hat-trick, but Baqa Jilani sits proudly at the very top of this illustrious list. 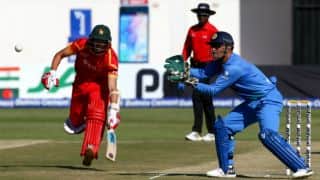