Despite running a temperature of 102°F, Eddie Paynter got up from his hospital bed, took a taxi to the ground, got into the dressing room in his pyjamas, changed into his cricketing whites and proceeded to score 83.

On February 13, 1933, Eddie Paynter got up from his hospital bed, took a taxi to the ground, got into the dressing room in his pyjamas, changed into his cricketing whites and proceeded to score a valiant 83. Arunabha Sengupta looks back at one of the most incredible tales of cricketing valour of all time.

The selection of Eddie Paynter for the tour had been surprising. There were still reservations about his temperament in Test cricket. It was said that his brilliant work in the outfield tilted the scales in his favour. Along with the fact that KS Duleepsinhji’s fragile health would not allow him a long arduous Australian summer.

Yet, few expected him to play in the Test matches. When he was included in the team on the morning of the third Test, at the expense of the Nawab of Pataudi Sr, it raised quite a few eyebrows. Especially, given that the Indian-born royal had scored a hundred in the first Test match.

Later, Douglas Jardine made the choice sound pragmatic in his In the Quest of the Ashes. With leg-spinners Bill O’Reilly and Clarrie Grimmett as well as left-arm spin of Bert Ironmonger to contend with, a left-hander was the need of the hour. Besides, he wanted someone capable of scoring quickly. The choice was between Bob Wyatt and the Nawab of Pataudi to vacate a spot. According to Jardine, “In spite of his fine score in the first Test match, the Nawab would, I feel sure, have been the first to admit that his batting had not been up to the very high standard he sets for himself. Moreover, he seemed to have lost some aggressiveness which comes with perfect timing.”

However, there are still suspicions that linger. The omission seems to have something to do with Pataudi not agreeing to move over to field in the leg-trap for the Bodyline attack of Harold Larwood and Bill Voce. When Jardine’s instruction met with refusal, the captain had remarked caustically, “I see His Highness is a conscientious objector.”

Whatever be the reasons, Paynter was in for the acrimonious Adelaide Test. He scored 77 in the first innings and fielded with customary brilliance, made doubly remarkable because he had lost the tops of two fingers of his right hand in his childhood.

He also crashed into the picket fence while fielding, injuring his ankle, and batted at No. 10 in the second innings — ignoring the instructions of the doctor.

The attack of tonsillitis

It was to be a precursor of things to come. With England 2-1 up in the series, the action shifted to Brisbane. Bill Woodfull won the toss and Australia batted, and Paynter, who had recovered from his injury, spent the day haring around in the outfield.

By the end of the first day, Australia was in a strong position at 251 for 3, Don Bradman unbeaten on 71.

The sun was blazing down and it was unbearably hot during the second day. Wyatt reflected later that it was the hottest day of his playing career. As Paynter fielded he encountered an alarmingly sore throat. He came off the ground, feeling distinctly ill and his temperature was found to be 102. He was rushed to the Brisbane General Hospital and was diagnosed with tonsillitis. According to the The Times, there was no chance of his batting in the England first innings when play resumed after Sunday’s rest.

The English bowlers, charged up by three quarters of a bottle of champagne supplied in the morning by manager RCN Palairet, engineered a recovery by taking the last 7 wickets for 76. The Australian innings ended at 360. Jardine opened the innings with Herbert Sutcliffe and the pair put on 99 before the close of play. In his memoirs, Jardine remembered the second day’s play as the greatest ever in the history of English cricket.

More epic was to follow. Jardine had not been very happy on getting to know about Paynter’s illness. According to his own memoirs, he had assumed that Paynter was aware of his condition before the start of the match and should have declared himself out of it. “Paynter should certainly have reported to me that he was not fit. (But) it is hard to blame over-keenness at any time and quite impossible on this occasion in view of his subsequent memorable performance.”

Jardine goes on to say that when he visited the Lancashire batsman at the hospital on Sunday he was looking much better and was the first to agree that if he had to break “bounds” and bat on crutches he would do so.

In Gubby Allen — A Man of Cricket, EW Swanton has a slightly different story to relate. According to Swanton, when manager Plum Warner informed Jardine about Paynter’s illness, the captain retorted, “What about those fellows who marched to Kandahar with fever on them?” Lord Roberts, VC, and his 10,000 British heroes on their 320-mile bleak and dangerous mountain trek had not yet been forgotten. True, this was just a cricket match, but for Jardine it had long since taken on the proportions of war. Later Bob Wyatt also recounted that Jardine put considerable pressure on Paynter.

Monday’s events are best captured by Paynter himself.

Bill Voce, injured and not playing in the Test, was sitting with him in the hospital. “We had the wireless on and a couple of wickets went down. So I asked Bill to get a taxi for us to go to the ground. I got my dressing gown on and was just going down the ward when the sister appeared. She wanted to know where we were going. I said to the cricket ground, and she played hell. She said if we must, we were doing it at our own risk and neither she nor the doctor would be responsible for our action. So we left for the ground.”

As the fifth wicket fell at 198, and Gubby Allen walked in to bat, Paynter entered the dressing room still clad in his pyjamas. Jardine did a double take and there were confused and concerned looks as he started changing into his flannels.

Eggs, brandy, a warm shower and sips of champagne were administered to fortify him. At 215, Allen snicked Tim Wall to the keeper and out walked Paynter in that stifling heat, under a wide brimmed panama hat, and slowly made his way to the wicket accompanied by thunderous applause.

He was pale and also trembling. A surprised Les Ames at the other end greeted him at the wicket. Woodfull, as concerned as anyone else, patted him on the back and asked whether he needed a runner. Paynter refused. He was just in time for the new ball.

Ames departed soon, but Paynter hung on for the remaining 75 minutes of the day, holding up one end as Larwood made some runs. It was tense cricket, with only 10 runs coming off 50 minutes before Larwood spanked a six off Ironmonger. When Stan McCabe bowled Larwood for 23, a vital 39 runs had been added for the eighth wicket. Paynter, unable to generate enough power to pierce the field, refused to budge and was unbeaten on 24 when play ended for the day, with England on 271 for 8. Returning to the pavilion with Hedley Verity, he promptly pulled on his pyjamas and returned to the hospital for the night.

The ward sister greeted Paynter with “Well done, now get into bed.” After a good night’s sleep, he felt appreciably better on the following morning and returned to the Gabba, pockets bulging with tablets and gargle mixture.

Verity was steady, and often quite fortunate. Paynter, significantly better now, played his strokes — making most of his runs on the leg side. The heat was scorching and a newspaper described the Australians in the field as “looking hopelessly stewed”. Even Vic Richardson sported a navy-blue cap to keep the sun at bay.

Stopping twice to gargle and take his medicine, Paynter reached his fifty amidst great cheer and edged the score along beyond the Australian total. The pair was still together at lunch. And when, with his personal score on a heroic 83 and England on 356, Paynter finally lofted  Ironmonger into the hands of Richardson, there followed the rare sight of the Australian fielders clapping as an Englishman made his way back to the pavilion.

The 16-run lead was a huge psychological boost. Having batted to the brink of collapse, Paynter now took the field, and the crowd sportingly shouted, “Well done, Eddie.” However, after a couple of hours, he had to return to the hospital as Freddie Brown took his place as a substitute.

At midnight he was woken up to a wondrous surprise. The organisers of the Telephone and Telegraph Exhibition in Manchester had organised a touching enterprise. Paynter’s wife May was guided by them to use the latest technological miracle of intercontinental telephone lines and call up her husband, who had just become England’s greatest sporting hero.

The next day, Paynter’s name was mentioned in the House of Commons, prompting cheers. And as England won the Test to regain the Ashes, the target fittingly reached with a leg-side six by Paynter in the second innings, his valour entered the cricketing annals as one of the greatest feats of physical forbearance and courage.

In an unprecedented gesture, a testimonial was set up for him by warm-hearted Australian cricket-lovers. A perennially bashful Paynter was rather shy to accept the cheque alone and took along teammates George Duckworth and Maurice Leyland for moral support.

In the end, he faced his greatest challenge on his return to England. Worthiest of cricketers that he was, Paynter was among the most tongue tied of men, and when his Lancashire captain Peter Eckersley threw a dinner in his honour at Oxford and asked him to give a speech, he trembled more than he had ever done while batting with tonsillitis.

Neville Cardus reported the words of the Lancashire batsman as follows: “Mr Eckersley an’ la-ads’. Ah can’t mak’ any speech. Ah can only say thanks. Ah did me best at Brisbane for England an’ for Lancashire … but as for talk about mi leaving’ a sickbed at risk of mi dyin’ — well, beggin’ your pardon, Mr Eckersley, that were all rot. It were nowt more than a sore throat.”

Mushtaq Ahmed yet to confirm IPL role due to recent backlash, say sources 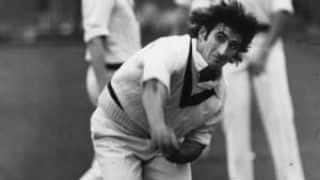