There is evidence to suggest that Elizabeth Barrett Browning played a bit of cricket at Colwall Green, under the Malvern Hills.

Elizabeth Barrett Browning, born March 6, 1806, was one of the most famed poets of the Victorian era. But, there is enough evidence to suggest that she also played a bit of cricket at Colwall Green. Arunabha Sengupta recounts three references to cricket that she jotted down in her diary.

How do I love thee? Let me count the ways.

I love thee to the depth and breadth and height

My soul can reach, when feeling out of sight

For the ends of Being and ideal Grace.

No, Elizabeth Barrett Browning was not referring to WG in these immortal lines when she penned Grace . The Father of Modern Cricket was just 13 when the poet passed away.

However, there is evidence to suggest that this lady, whose poetry attracted the admiration and the courtship of her later husband poet Robert Browning, did play a bit of cricket at Colwall Green, under the Malvern Hills.

In 1831, she and her family were living at Hope End in Colwall. Elizabeth was then 25, her favourite brother Edward (Bro) was 24 and the second son of the family, Samuel, was 19. The third son, Charles, was younger still, in his early teens.

The memories of this stay were documented in Elizabeth Barrett s diary, later used in the book The Barretts at Hope End, edited by Elizabeth Berridge.

On June 10, 1831, Elizabeth Barrett writes: Bro and Sam are engaged in the Colwall Green cricket match this evening, and the minor boys are to accompany them. Good fun to them! Now I must go and read Pindar.

However, that summer, her involvement with the game went further than casual observation before going off to be among her books. On August 2, she wrote in a rather disturbed state: The boys, save Stormy [Charles] and the girls, save nobody, to Colwall this evening, to play cricket and drink tea. I wish a little shyness and obstinacy could have kept me at home with the only saved person.

According to Rowland Ryder, it was quite natural to regret being coaxed into cricket at Colwall Green. He himself played there a century later, in the 1930s, and the pitch was very unpredictable.

The last reference to cricket in the Barrett diaries take place on September 13. She writes: So Sam came home in an irrational unchristian state from the cricket match last night. Henrietta heard him carried upstairs and was very much frightened. Neither he nor Bro appeared at breakfast; for Bro went out to shoot, and he went to Mathon and the farther he goes the better.

Elizabeth Barrett also wrote The Battle of Marathon: A Poem. In fact, she did so before venturing into the cricket field, at the tender age of 14. However, she did not mention Pheidippides, whose run from Marathon to Athens supposedly led to marathon, the athletic event. 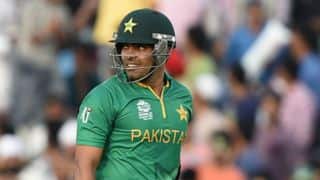