Elton Chigumbura is the only one for whom both innings were scored at a strike rate of more than 100.

Elton Chigumbura s first two One-Day International (ODI) centuries came back-to-back after having waited for 160 innings for his maiden century. Bharath Seervi lists other players who did the same in the past.

Elton Chigumbura, Zimbabwe s current ODI and T20I captain, waited for 160 ODI innings and more than 10 years to score his maiden ODI century. He finally got his maiden ODI hundred against Pakistan at Lahore on May 26, 2015 on his 161st ODI innings. He did not stop at that. He scored another ton in his next innings, against India at Harare on July 10, 2015. He had no century from 160 innings and then got two in two.

The first batsman with such a sequence was Roy Dias who scored his first two centuries on September 15 and September 26, 1982, against India at Kotla and Chinnaswamy respectively. They were Dias first two ODI centuries as well as the first two by Sri Lankans in ODIs. Others who did it before 2000 are Dean Jones, Mark Greatbatch, Inzamam-ul-Haq, Brian Lara and Nick Knight.

The table below lists the 15 batsmen including Chigumbura, who scored their first two ODI centuries in consecutive innings.

– Chigumbura is the only one for whom both centuries came while chasing.

– Chigumbura is the only one for whom both innings were scored at a strike rate of more than 100.

– Kumar Sangakkara and William Porterfield are the only two batsmen for whom both the centuries were unbeaten.

– David Warner is the only batsman to score another century in his next innings.

– Porterfield and Mohammad Shahzad are the two batsmen from Associate Nations.

– With Chigumbura and Mahmudullah, there is at least one batsman from each of the ten Test-playing nations except South Africa.

– Jones, Sangakkara and Rohit Sharma scored both their centuries at the same venue but against different oppositions.

– Dias, Greatbatch, Inzamam, Knight and Warner scored both centuries against same oppositions but on different venues.

– Mahmudullah is the only one to achieve this in World Cup.

– The centuries of Warner were in the first and the second final of Commonwealth Bank Series 2011-12.

– Barring Chigumbura, no one had played 100 or more innings before achieve this. Mahmudullah played 97, Sangakkara 78 and Andrew Flintoff 63.

– Knight and Shahzad did it just in their career s second and third innings after failing on debut.

– Inzamam scored two centuries by his sixth innings in ODIs. He scored only eight more from 344 innings.

– Sangakkara scored the most ODI centuries (25) among the above 15 batsmen. Lara scored 19.

– Dias and Greatbatch did not score another century in their ODI career in future. Mahmudullah and Chigumbura also have scored only two centuries but haven t retired.

Batsmen who scored most ODI centuries without a single sequence of back-to-back centuries are Adam Gilchrist and Nathan Astle 16 each. Virender Sehwag has 15.

Astle missed out on scoring consecutive centuries twice by getting out in 90s after a century.

Gilchrist did not have such a sequence but he scored two centuries in three innings thrice in his career. 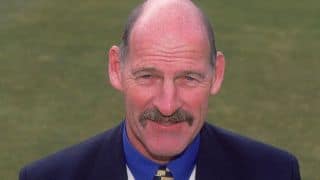 Clive Rice: The most experienced First-Class and List A cricketer from South Africa