England became the fifth team to be bowled out before the end of the first session of a Test match.

Asked to bat, England were bundled out for 58 runs in the first Test against New Zealand at Eden Park, Auckland. This is the first ever day-night Test on New Zealand soil, making it more special for the hosts. It was the combination of Trent Boult and Tim Southee that rocked visitor s claiming 10 wickets between them. Only Craig Overton managed to provide resistance, and helped England cross 50-run mark. Let us glance through the stats that were re-written.

58 This was England s sixth lowest Test score. Their lowest, 45, came against Australia at Sydney in 1887.

1 This is also the first time for New Zealand that two bowlers (Trent Boult 10.4-3-32-6 and Tim Southee 10-3-25-4) bowled unchanged in the entire Test innings. England were the last time to achieve this feat against New Zealand at Lord s Test in 2013.

58 This is the second lowest Test score at Auckland. New Zealand were bundled out for 26 against England.

1 This is also the first time in Test history that a No.10 or and No.11 batsman has scored more than the rest of the team combined. Craig Overton scored 33 out of England’s 58, scoring 56.89 per cent of team runs. Highest (%) contribution by a No.9 in a team’s innings 57.25 per cent by Asif Iqbal of Pakistan against England at The Oval in 1967.

5 This is the 5th time that Trent Boult has taken three wickets within the first 10 overs of a Test innings. He finished with career best Test figures of 6 for 32. 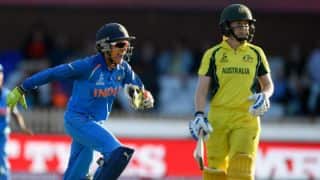