Nick Compton returned to the England side after a two-year gap for the series against South Africa.

Nick Compton’s failure to score big in the first innings of the Lord’s Test against Sri Lanka could very well turn out to be the end of the road for the right-handed batsman. England would have felt that they finally have an answer to their No. 3 position with Compton returning to the team for the series against South Africa, where he made 85, 49 and 45. That’s as good as things got for Compton though, as he managed to accumulate just 98 runs in the next nine innings at an average of 12.25. For someone batting so high up the order, those numbers are just atrocious. FULL CRICKET SCORECARD: England  vs  Sri Lanka , 3rd Test match at Lord’s

England do have a couple of talented players waiting in the wings for them, if Compton fails to deliver in the second innings as well. One such candidate is Scott Borthwick, who has scored 574 runs in nine innings for Durham this season at a staggering average of 82. Borthwick has also struck three tons so far. He made his Test debut couple of years ago at Sydney in the first Ashes 2014 Test, which England lost by 281 runs and ended up losing the series 5-0. FULL CRICKET UPDATES: ENG vs SL 2016 Live Cricket Score, 3rd Test, Day 1

His career is reminiscent with that of Steven Smith, who broke into the team as a wrist spinner, but is currently the No. 1 ranked Test batsman in the world. Borthwick’s leg breaks did fetch him four wickets in his only Test, but his increase in stature as a batsman has depleted his bowling potential. Borthwick’s inclusion in the Test could give Moeen Ali a spin partner, considering that England will be touring India later this year. It might not be a bad idea to test him against Pakistan, who tour England in July. READ: Nick Compton: Even England batsmen will struggle vs James Anderson, Stuart Broad

There were also murmurs before the second Test at Chester-Le-Street about the possible inclusion of Essex batsman Tom Westley. Westley too has had an incredible season in Division Two, where he is the third highest run-getter with 589 runs at 58.9, which include two tons and four fifties. England captain Alastair Cook played alongside Westley earlier this season and would know what sort of a talent the 27-year-old is.

But the selectors and the Coach backed Compton for the third Test and by the looks of it, it seems to be a bad move. This would have been the perfect platform to bring in a new player, considering England have already won the series. But the team management thought otherwise.

Compton would know that he is playing for his career and will hope to get a big score in the second innings at Lord’s. If he fails, his 16th Test cap could be his last for England. 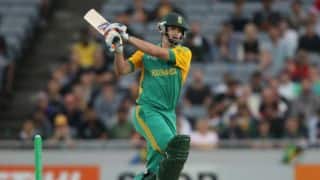