If last week's result was bad, this one was worse. To lose one Test heavily could be passed off as "unlucky", but two in a week suggests there is something drastically wrong. 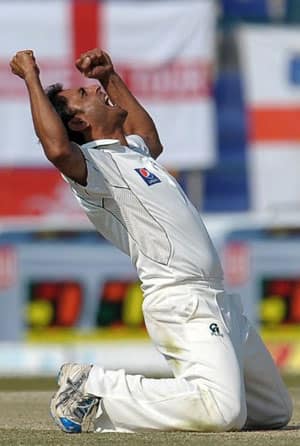 If last week’s result was bad, this one was worse. To lose one Test heavily could be passed off as “unlucky”, but two in a week suggests there is something drastically wrong. The worst thing about it though is that for three and a half days of the Test match England were in command, with a handy first innings lead being complemented by some fine second innings bowling, but the game just slipped away from them this morning after being slightly lax in the field and hopelessly abject with the bat. The 72 all out collapse – not even getting half way to the 145 target – was up there with England’s biggest headless chicken chases, not knowing whether to stick or twist, they eventually got rolled by a high-class display of spin bowling from Abdur Rehman and Saeed Ajmal. The calls for change have been made, but who should get a stay of execution, and who should be led to the chopping block?

There is an argument, of course, that there’s no need to make any panic decisions based on the first two defeats in over a year. Andy Flower and Andrew Strauss don’t do panic; they trust in the players that they’ve picked to go out after failing and turn it around. The consistency of selection over the past few years has been crucial to England’s ascent to the top of the rankings, with a settled team able to play without the fear of constantly worrying about their place. And by and large, this has been a good thing. Players like Kevin Pietersen, Ian Bell and Alastair Cook were eased through lean spells, and the results, and those individual player’s performances in 2011 proved the selectors right. While England have performed badly these two weeks in the Gulf, there is a school of thought that if the selectors continue to consistently make consistent selections, those players will turn it around and the wins will come.

To a degree, I agree with those thoughts. Certainly in the case of Bell and Pietersen, two players who’ve come under a lot of scrutiny this series for four low scores, their exploits over the last year, where they could arguably have been named the world’s No 1 and two Test batsmen, shows that they clearly have the class and ability to score lots of runs at Test level, and the fact that they’ve happened to have two poor games in a row doesn’t change that. Calls for them to be dropped strike me as ludicrous.

The two players that have had a much longer trough than peak have been Eoin Morgan and Andrew Strauss. While Cook, Pietersen, Bell and Trott can point to – near-enough – 50 or above averages, Morgan doesn’t have this to fall back on. Morgan has flattered to deceive so far in his fairly brief Test career, but after 15 Tests an average of 31 is just not acceptable. Indeed, his first-class record in general – averaging 36 from 68 games – is unremarkable, to say the least, and certainly doesn’t indicate a rapid improvement of scores from the Irishman. Eoin’s class and ability in one-day cricket is undoubted, and he got into the Test team on the back of limited-over exploits. However, he simply hasn’t cut the mustard in whites for England, and should be dispensed with.

Strauss is a curious case – as excellent a batsman as he has been on his day, he just hasn’t scored anywhere near enough runs for England in recent times. Since his run-a-ball half-century at Sydney this time last year, Strauss has only made one 50 in England colours, and in nine Tests has only made 324 runs. For an opening batsman, this isn’t good enough. While there have been some reactionary calls for Strauss to go, it shouldn’t be forgotten that his batting isn’t all that he brings to the team. A born captain and the natural leader of the team, taking Strauss out of the dressing room would leave a chasm that just wouldn’t be filled, and could lead to imminent disaster. However, as important as it is that Strauss remains in the team, as it stands, it isn’t tenable for the opening batsman to be so out of touch and form. Strauss’s play at the moment reminds me of the final throes of Michael Vaughan’s England career – so valued as a captain but so scratchy at the crease – incidentally the third Test will be the first dead rubber England will contest since the South African series in 2008 that signaled the end for Vaughan.

So what options does England have? The only spare batsman in the England squad at the moment is Ravi Bopara, but replacing Morgan with the equally as frustrating Bopara seems more of a sidewards step than forwards. The England Lions are on tour at the moment, and of their contingent, the likes of James Taylor, Joe Root and Alex Hales have all been tipped for further international recognition. However, my solution for England’s ills is a cunning one, and one that may not have even been thought about by the powers that be – probably with good reason. Strauss has really struggled against the new ball over recent times, which is sort of a bad thing for an opener to struggle against. With Morgan looking clueless in the middle order, a fix could be pushing Strauss down the order (thus keeping him in the side), with someone else coming in to open, be it Hales, Steve Davies or even Middlesex’s Sam Robson (although I may be slightly biased about that one). England gets the benefit of Strauss’s captaincy and experience in the middle-order, which as Misbah-ul Haq has showed is certainly no bad thing, and in their new opener they have the opportunity to pick someone who is better than Morgan or Bopara. While this is a very unlikely situation, I believe it is the right thing to do, so as such, I am hereby announcing the start of the #straussforsix bandwagon. Feel free to jump on it.

This second defeat is the first time in nearly four years that England have lost back-to-back, and the 74 all out is the lowest score since the 52 all out debacle in Jamaica. England are currently ranked as No 1 in the world, but can’t legitimately lay claim to being the world’s best until they address their stark batting issues in the subcontinent. The foundations are there for an excellent side – the bowling especially was absolutely world-class. But England have been carrying players for far too long, and some big decisions need to be made. While Bell and Pietersen do deserve to be in the team after last year’s form, nobody should be “undroppable” (just see what being undroppable has done for India’s Test side…) and a big kick up the backside should help solve a few problems. However, if England genuinely are to be thought of as the world’s best, they are going to have to rapidly step up their game in foreign conditions. Whether or not they can do it in time for the final Test is debatable, but with seven more Tests this calendar year to be held in the subcontinent, something has to be done.

(Will Atkins is a cricket writer and blogger for The Short Midwicket – theshortmidwicket.blogspot.com. When he isn’t watching, writing or podcasting about cricket, he dresses up as a panther for Middlesex County Cricket Club)