England managed to win the ODI series comprehensively, but the Test series was an evenly contested one.

Pakistan’s tour of England began with hype surrounding the return of Mohammad Aamer, who was banned for five years for his role in the spot-fixing scandal that rocked the cricketing world in 2010. But once the series began, it was all about cricket. The quality of cricket from both sides was excellent through the tour. A well fought Test series ended 2-1, before England’s One-Day International (ODI) side steamrolled Pakistan. The last match- only T20 International (T20I) – turned out to be one-sided and it was Pakistan under their new leader Sarfraz Ahmed, who persevered. Let us take a closer look as to how England fared in the tour: READ: PAK vs ENG: Tour full of peaks and valleys, ends with vital questions

The Test side under Alastair Cook’s leadership have been in good form off late. They went down in the first Test at Lord’s but bounced back extremely well in the next two. Cook led from the front, along with Joe Root, who finished as the leading run-getter in the tournament. Root’s 512 runs included a mammoth 254 in the second Test at Old Trafford. There was some assistance for leg-spinner Yasir Shah at Lord’s but England negotiated him well in the next two Tests, giving away just four wickets to him after Yasir had rattled England at Lord’s with a 10-wicket haul.

England also showed the quality and depth they had in their batting line-up, with Moeen Ali and Chris Woakes batting at No. 7 and 8. Moeen scored a couple of fifties in the third Test at Edgbaston and followed it up with a ton in the final Test at The Oval to rescue England. Moeen also came in handy with the ball, finishing with 11 wickets with his off-spinners.

Jonny Bairstow, who has now established himself as the first-choice wicketkeeper-batsman for England in the longest format too carried on his good form from the England series. He scored four fifties in his 366 runs and gave England some stability in the middle-order. But there were some negatives as well. READ: Pakistan dethrone India to become No. 1 team in Test cricket

With Nick Compton taking an indefinite break from cricket, Gary Ballance was drafted into the side and did very less to justify his place in the side. The same can be said about James Vince as well. Former player Geoffrey Boycott believes that Vince’s Test career is effectively over after the right-handed batsman threw his wicket away in the second innings of the final Test. “Vince’s shot was unbelievable,” Boycott, who played 108 Tests for his country, told BBC.

“He’s playing for his career because he’s had these tiny cameos of 20 and 30 [and] we’re all saying ‘can’t you bat any longer?’. And what does he do? ” … It was the most stupidest shot you could imagine. For me, that’s the end of his Test match career. You can’t carry on like that. The length wasn’t right, the shot wasn’t right; the situation demanded that he play differently and carefully. That wasn’t good enough.”

Cook’s opening partner Alex Hales too did not have a good series. He managed to score just one fifty in his eight innings, and Boycott stressed on the fact that he is not going to be a great opening batsman in Tests.

England play Bangladesh in their next Test series and we may see a few new faces in the side, following poor show from a few players. Due to this the pressure of scoring runs falls on the top-order batsmen like Cook, Root or Bairstow. This is an area England must address going ahead.

England eased past Sri Lanka in their previous ODI series. They were set for a 5-0 whitewash against Pakistan, but the visitors dug deep and rescued a win in the final ODI at Cardiff. Eoin Morgan-led England did not look in any sort of trouble for most parts of the series. They were often set modest targets and when the time came for them to set one, they put on record-breaking 444 for 3 on the board in the third ODI. They also set Pakistan a target of 303 at Cardiff, but Pakistan dug deep to secure a consolatory win. England batsmen were rock steady throughout this series. Their opening pair of Hales and Jason Roy got them off to brisk starts and the middle-order comprising of Root, Morgan and Jos Buttler would just capitalize on that. READ: Morgan delighted with ENG’s hunger in ODIs after series win against PAK

There was one instance when England had lost four wickets for 72, chasing 248 in the fourth ODI. Bairstow, who had replaced Buttler at the last moment saved the day along with Ben Stokes and Moeen Ali to take England home. The best part about their squad is everyone till No. 11 bats and no target is daunting enough for them, regardless of the situation of the match. Among the bowlers, Woakes was at his very best. In a format that does not have either Stuart Broad or James Anderson; Woakes has taken on the responsibility and delivered in the last couple of series. The ODI team has depth in batting and variations when it comes to bowling. From crashing out in the group stages of the ICC Cricket World Cup 2015, to losing just one match all summer, the England ODI team has indeed come a long way.

With Champions Trophy 2017 being played at home this time around, England are well placed to win it for the first time. READ: England played like ‘pretty boys’ vs Pakistan, says Trevor Bayliss

It will be unfair to criticise a team based on just one game, but it would be safe to say that England were nowhere close to being the dominating side they were in the T20 World Cup and also the T20I against Sri Lanka. The ODI win at Cardiff perhaps gave Pakistan the momentum going into this game and they never let go off it right from the beginning. Hales was the only one, who got going for them at the top, which shows his contrasting qualities in limited-overs compared to Tests. England’s batsmen let them down as they failed to set a competitive target. England will hope that this is just a one-off performance and they get back to winning ways in the shortest format soon. READ: Pakistan vs England, One-off T20I: Report Card for both teams

While England’s Test side needs a few tweaks, their limited-overs side is perhaps one of the best in the world. They will be thoroughly tested when they play the three-ODI series against Bangladesh, but they have all their bases covered and will not be an easy side to beat. 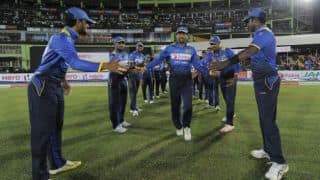