Home may be where the heart is, but it's an away win against the odds which truly stirs the soul. England came into this match being written off in all quarters and given less chance of levelling the series than Stuart Broad has of appearing in the Third Test. 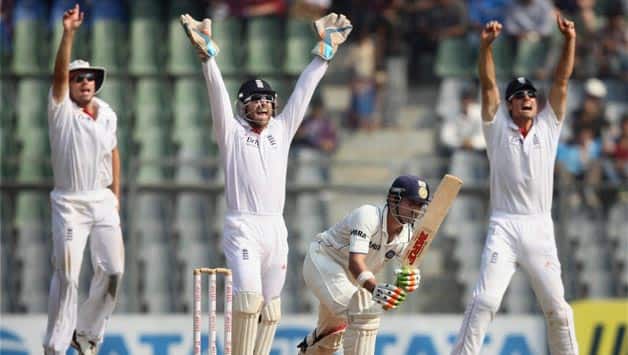 After the Abu Dhabi debacle, a chase of anything over a hundred might yet have proven perilously nerve-shredding, but the victory in the second Test should rank among England’s most unforeseen © PTI

Home may be where the heart is, but it’s an away win against the odds which truly stirs the soul. England came into this match being written off in all quarters and given less chance of levelling the series than Stuart Broad has of appearing in the Third Test.

At Ahmedabad they were down and out, usually in the most insipid or infuriating fashions to the wiles of Ravichandran Ashwin and Pragyan Ojha, the latter of whom was available at a generous 9/2 to be top wicket-taker in the series, odds considerably shorter than those offered for England to win it. After that sullen defeat, even England’s troubled vice captain didn’t have the stomach for the platitudes about “taking the positives”, though it should be remembered he’s had plenty in his career so far, regardless of the brickbats which constantly bounce off his religiously well-groomed head. A little rest to rediscover both his pace and his poise will surely be beneficial for him and the team in the long run.

England have been hard to love this year. Their results — seven defeats in twelve matches — have been ugly, but still made to look like Scarlett Johansson in comparison to the off field squabbles surrounding Kevin Pietersen. The management may have been stolid and inflexible in their team selection and approach, but Andy Flower, Graham Gooch and David Saker have been yoga personified when weighed against the rigidity and mental disintegration to be found within the England and Wales Cricket Board (ECB) itself throughout the KP affair.

The way in which Pietersen has seemingly been accepted back into the fold so seamlessly illustrates the folly of both the players themselves — England’s joint highest century maker included — back in the summer and the pompous piety of Giles Clarke and David Collier. Unless we are doing a massive disservice to the behind the scenes counselling work which has gone on, the entire furore increasingly appears to have been little more than a group of colleagues involved in a dispute about working hours and pay scales on top of the usual spats, allegiances and bitchy texts which afflict any workplace. Just because, or indeed especially because, the ECB has its staffing policies open to the scrutiny of the wider public was no reason for them to be as reactionary and knee-jerk as some of the puerile and borderline racist articles written about Pietersen at the time.

The essential masochism of being an England fan of a certain age is a theme almost as well-worn on this blog as Broad’s positive-taking, but it nevertheless remains true that many of us need to be brutalised before we can love. Clinical success is viewed with suspicion, failure with almost relief as it affords the chance for the gallows cynicism which got us through the dark days of Aftab Habib and Imran Tahir inspiration, Ian Salisbury. For that reason, the 1994 win in Bridgetown after losing the first three matches of that series and being all out for 46 in the previous Test remains one of England’s most poignant displays, perhaps closely followed by the still bewildering triumph of Adelaide the following year. On those occasions, nothing whatsoever was expected from the dregs of the then set-up’s chaos, and so the results were all the sweeter. After the Abu Dhabi debacle a chase of anything over a hundred might yet have proven perilously nerve-shredding, but the victory in the second Test should rank among England’s most unforeseen and finest on the road.