As England’s second three day warm-up match of this two-Test 'mini-tour’ of Sri Lanka culminated in an unexpectedly exciting finale, thus averting one of those all too familiarly insipid draws so often associated with this beautiful isle, a sense of foreboding ahead of the upcoming five-day stuff had still managed to lodge itself deep within my admittedly negative psyche. 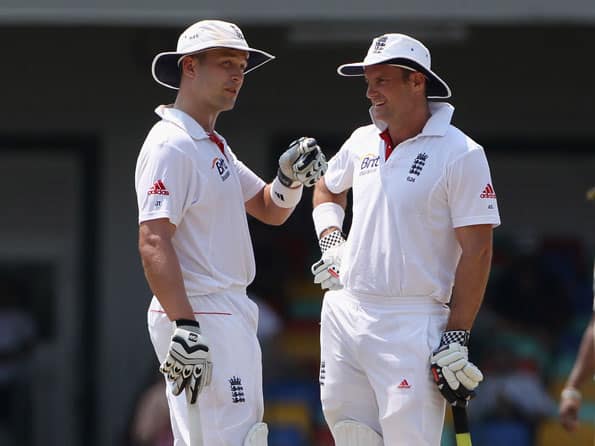 Jonathan Trott (left) and Andrew Strauss (right) in a mid-pitch chat in the tour match between the Sri Lankan Development XI and England at the SSC in Colombo on Wednesday. The two frontline English batsmen ran up big scores to be in good nick ahead of the Tests © Getty Images

As England’s second three day warm-up match of this two-Test ‘mini-tour’ of Sri Lanka culminated in an unexpectedly exciting finale, thus averting one of those all too familiarly insipid draws so often associated with this beautiful isle, a sense of foreboding ahead of the upcoming five-day stuff had still managed to lodge itself deep within my admittedly negative psyche.

Up against a Sri Lankan Cricket Development XI containing plenty of experience in the form of Test capped Chamara Silva, the SSC Stadium in Colombo produced a pitch that can only be described as a road, and as roads go this belonged more in the Autobahn category than cobbled side street. Had it not been for two rather generous declarations from the Development XI, this fixture may well have been devoid of incident for its entirety.

You will hear few complaints from struggling England captain Andrew Strauss, who went on to register a solid first innings century before retiring out. Having last returned a first-class three figure score in the first Ashes Test of 2010, Strauss will have been mighty relieved to spend some time in the middle. Jonathan Trott, Strauss’s makeshift opening partner in place of the rested Alastair Cook, also looked assured in reaching his own century. Trott, one of England’s consistent performers since his introduction to the side, will be quietly pleased after having his own somewhat less documented struggles than his captain of late.

Kevin Pietersen looked in good order when making brisk contributions of 26 and 52, with the trio of Ravi Bopara, Samit Patel and Matt Prior all providing significant assistance. England’s key concern remains the recent form of Warwickshire batsman Ian Bell, who made just 14 and 11 following his second ball duck in the first of the warm-up fixtures. After enjoying a stellar 2011, Bell’s start to 2012 has been a forgettable one thus far, though it would be somewhat of a surprise should his name be absent from the line-up come the morning of the first Test in Galle on Monday.

England’s bowlers, without the rested James Anderson and Monty Panesar, had struggled on Day One as the Development XI scored with unabated ease. A lack of assistance from the benign wicket coupled with soaring temperatures in Colombo was largely to blame; Matt Prior kept wicket without pads such was the heat. Chamara Silva prospered at England’s expense, stroking an effortless 163 before eventually falling to Steven Finn.

England’s management are probably quietly satisfied with their charges being made to toil in unfavourable conditions. Acclimatising to the heat and humidity is so often a key factor in a tour of Sri Lanka, and the dogged perseverance of England’s bowling unit paid tribute to the superb fitness regime currently in place under the stewardship of Andy Flower.

The Development XI found life no easier upon taking to the field on day two following a sporting first innings declaration at 431 for six. England’s openers coasted to 197 without loss before Strauss retired out in altruistic fashion. Indeed, if events in Colombo on Wednesday were anything to go by, England may have more than just their Sri Lankan humanoid counterparts to contend with. Clearly sympathetic with the plight of the Development XI in the field several local critters gallantly offered their services. At one moment, with Jonathan Trott just having reached three figures, the Development XI were aided by a monitor lizard fielding at point, along with a rather surly looking cobra sweeping the boundaries edge.

My sense of foreboding happens to extend beyond the admirably loyalist local fauna, though. Sri Lanka is dubbed ‘the home of the draw’ for good reason, and pitches like that at the SSC in Colombo is a prime example as to why. In short, Test cricket does not need draws. Furthermore, Sri Lanka as a nation does not need draws.

The travails of Sri Lankan cricket have been well documented of late. A country in the midst of civil war and subject to ineffable atrocities, cricket has so often awarded temporary solace to many, but with inner turmoil and players going unpaid for lengthy periods of time its captivating power may be on the wane in this cricketing hotbed.

Scores of 600, inevitably resulting in drawn Test matches, will do little to re-captivate that audience. Competitive wickets with a propensity for nail-biting finishes are vital to re-igniting the fervour so often witnessed during the halcyon days of Muttiah Muralitharan, who had within his person the power to unite a nation. Whilst no current Sri Lankan cricketer can claim to possess the widespread appeal of the legendary off-spinner, it is within the remit of the curators to produce pitches conducive to exciting cricket so that similar levels of interest snare the attention of the masses.

Unfortunately, I speak in hope. The reality is that the atrocities are likely to continue, the country will remain divided and Sri Lanka’s cricketing hierarchy have some way to go before their own house is in order. Test cricket has the ability to restore a degree of national pride and unity, and it is for that reason that competitive wickets are essential in the forthcoming series.

If recent fixtures tell us anything, England can expect to be playing on featherbed pitches offering little assistance for the bowlers of both sides. In such heat and humidity the cricket is likely to be of an attritional nature; one batting collapse or inspired spell of bowling could win or lose a Test match. For what it’s worth, my own prediction is a dull 0-0 draw across the two Tests.

England’s batsmen, having shown good form across the warm-up fixtures, should prosper against an attack that is notably weaker than that of their Pakistani tormentors in the UAE. Sri Lanka’s own batsmen are naturally well adept in their home conditions and perennial stalwarts Kumar Sangakkara and Mahela Jayawardene may prove particularly difficult to dislodge.

Both sides possess genuine match winners, but will the wickets produced make victory a possibility? England certainly hopes so, and for the beleaguered nation of Sri Lanka there may be wider reaching effects than purely the result of a Test match.

Bangladesh likely to cancel next month's tour to Pakistan