England is placed at No. 5 in ICC T20I rankings, above heavyweights such as Australia, Pakistan and Sri Lanka. If England can get their combination right and play according to the situation, they can emulate their performance displayed in ICC World T20 2010.

Winning ICC World T20 2010 was the only flagship tournament England have emerged victorious in. Having a long cricketing history, England rarely made a lasting impact in the ICC’s major tournaments. The dark cloud of failing to enter the quarter finals of ICC Cricket World Cup 2015 will be looming over English cricket. However, England have been blowing hot and cold since then in different formats of the game. They put up a decent performance in the ODI series against South Africa, but suffered 0-2 drubbing in the T20 series. For England to win the ICC World T20 2016, captain Eoin Morgan and his team will have to get their act together.

Alex Hales has been one of England’s  most successful batsmen for the past one year in the short formats. He amassed 383 runs and was awarded Man of the Series against South Africa in ODIs. To add to the fire, he averages 33.94 in T20I, with a healthy strike-rate of 135.12. On the helpful Indian pitches, he can score runs at a brisk rate and set up the foundation for the middle order.

Jason Roy and James Vince have been selected for the opener’s slot. As Roy was opted as the first choice to open with Hales in the series against South Africa, Vince may not get to spend time in the middle.

England’s star batsman Joe Root will be the key to England’s success. The 25-year-old batsman has scored two back-to-back centuries in South Africa and will play a vital role in holding England’s middle order together.

Morgan has been England’s marquee T20 player for the past couple of years, but his recent performance against South Africa is a matter of concern. Morgan failed to make an impact and managed to score only 64 runs in five ODIs and 48 runs in two T20s. Morgan will have to lead from the front by getting some runs under his belt and will be vital for England in T20 extravaganza.

After Andrew Flintoff, if there’s a genuine fast bowling all-rounder in the England team, it’s Ben Stokes. Stokes has a reputation of picking crucial wickets and is handy with the bat as well. Along with Jos Buttler, he can set the scoreboard on fire in the death overs.

If Buttler doesn’t play due to any unfortunate circumstances like an injury, Sam Billings can keep wickets in his place and strengthen the lower-middle order with his aggressive batting.

England selectors drafted Liam Dawson in the team as a left-arm spinning all-rounder. Though 25-year-old Dawson hasn’t made his debut yet, his services will be useful if there’s spin on offer. Another bright aspect to the England team is Moeen Ali. Lately, Moeen hasn’t been effective with the bat, but has managed to contain the onslaught with the ball. If England play both Dawson and Ali in the line-up, it will add more value to the batting as well as bowling options.

The only full-time spinner England have in their squad is Adil Rashid. In the Big Bash League 2015-16, Rashid displayed a remarkable performance and bagged 16 wickets. If he continues his stellar performance in ICC World T20, England have a bright chance of becoming the table topper.

England have a variety of fast bowlers in their ranks: Liam Plunkett, Chris Woakes, Chris Jordon, Reece Topley and David Willey. The England pacers do not have enough experience under their belt and may leak runs in crunch situations.

England is placed at No. 5 in ICC T20I rankings, above heavyweights such as Australia, Pakistan and Sri Lanka. If England can get their combination right and play according to the situation, they can emulate their performance displayed in ICC World T20 2010. 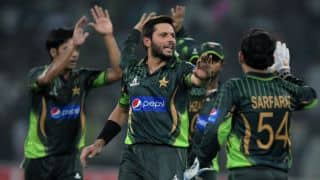