Australia thrashed England in the second One-Day International (ODI) to win by an 88-run margin in Manchester on Sunday to take a 1-0 lead in the five-match series. Michael Clarke scored a sensational century (105 off 102 balls) and was well supported up by George Bailey (82 off 67 balls). Kevin Pietersen and Jos Butler were the better performers for England on the day. Shrikant Shankar gives his assessment of all the players who played at Old Trafford. Australia thrashed England in the second One-Day International (ODI) to win by an 88-run margin in Manchester on Sunday to take a 1-0 lead in the five-match series. Michael Clarke scored a sensational century (105 off 102 balls) and was well supported up by George Bailey (82 off 67 balls). Kevin Pietersen and Jos Butler were the better performers for England on the day. Shrikant Shankar gives his assessment of all the players who played at Old Trafford.


Australia (According to batting order)

After breaking a family record for Australia on September 3 against Scotland, Shaun Marsh could not follow up his 151-run knock on Sunday. He fished outside off-stump to a Steven Finn delivery without any feet movement and edged it to Jos Buttler behind the stumps to get out for a four-ball duck. Marsh also did not have the best time in the field. He missed a run-out chance due to a lapse in concentration.

Let’s face it nothing is going to live up to what he achieved in the first Twnety20 International in Southampton. But Aaron Finch played well for his run-a-ball 45, which included four fours and one six. He would have been kicking himself after throwing his wicket away after looking set to score a big hundred. He mistimed a lofted drive straight off James Tredwell to the long-on fielder.

Shane Watson survived an early scare for leg-before to score a 51-ball 38. He smashed six fours and one six. It was an indifferent innings from Watson as he did not look very comfortable out in the middle, though, when he hit the boundaries, it looked like the real Watson. There was controversy for his dismissal as he was given caught behind off Ravi Bopara. The umpire initially gave not out, but England asked for a review and the third umpire said out. Watson only took one wicket, but what a wicket to take as well. He accounted for Kevin Pietersen when he was set.

Michael Clarke just loves Old Trafford. He scored an extra-ordinary century in the Ashes 2013 series in Manchester and on his return in the ODIs, celebrated it with another brilliant century. His 102-ball 105 was beyond class. He attacked the spinners, slower bowlers and fast bowlers alike. He struck 14 fours en route to his eighth century in ODIs. He also got all his field placements and bowling changes right during England’s innings. There was no doubt to who was the Man-of-the-Match.

The vice-captain was not far behind as well. George Bailey’s 67-ball 82 offered the perfect support for Clarke to score his century. Bailey was more belligerent as he smashed five fours and four sixes. He also would have been kicking himself as he was so close to a century. Bailey pulled a short delivery from Bopara straight to Tredwell at short long leg. A gift of a catch!

Came in with very few overs remaining, but helped himself to an unbeaten 16-ball 16. Adam Voges’s real contribution came with the ball. The part-time left-arm spinner dismissed Bopara caught and bowled with a smart low catch.

Matthew Wade had a poor outing with the bat as he was bowled for a first-ball duck by Boyd Rankin. While keeping, took a very good catch to dismiss Jonathan Trott to make his contribution.

James Faulkner is becoming a fine bowling all-rounder. First he hit an 11-ball 18, including two fours and one six to power Australia’s score past the 300-run mark. He then bowled Joe Root with an incoming delivery. He kept things tight in a relatively flat wicket.

Mitchell Johnson was the best bowler on the day. He picked up two wickets, but both were in back-to-back deliveries. Michael Carberry was the first to go as cut a short ball straight to Clarke at point. Then Jonathan Trott got the ball of the match first up. The ball from Johnson took off from just back of a length and surprised Trott, who did not know whether to come forward or stay back. In the end he only gloved the ball at chest height and Wade took a very good catch. That sort of derailed England and they never really recovered.

The right-arm medium-fast bowler was impressive as he took three wickets. But all of those came after England had lost half their side. So in perspective, it was a lesser effort than Johnson’s. the high point, however, was the wicket of Eoin Morgan.

Had a poor day with the ball. The England batsmen attacked Fawad Ahmed and did not let him settle. Pietersen, Morgan and Jos Buttler were severe against him and scored heavily. He did pick up the wicket of Buttler, but it was more of a mishit. Has to improve as the series goes along or a pattern could be emerging. 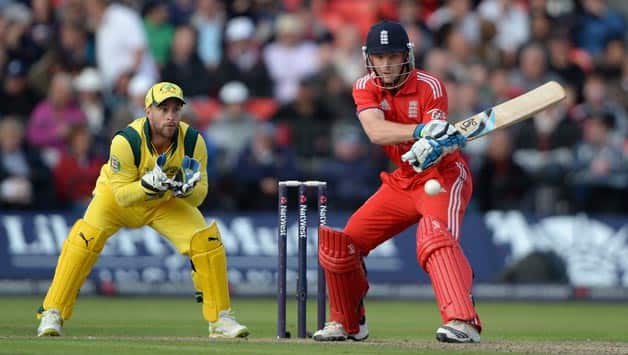 England (According to batting order)

If England had any chance to chase down Australia’s 315 for seven, then Kevin Pietersen had to have a wonder innings. Unfortunately for English fans and the neutrals, it was not a long innings from him. It was a very good innings from Pietersen as he scored a 66-ball 60, which included six fours and two sixes. Fell to a Watson delivery just when he seemed like getting completely into his rhythm. He slightly sliced a lofted drive off a length delivery to Faulkner at extra-cover.

Much was made of Michael Carberry’s outstanding form in the domestic T20 tournament, but he looked a little nervous in the big time. He scored only four off 11 balls before cutting a Johnson delivery to Clarke.

Well as explained before, Jonathan Trott faced the ball of the match and that too on the first ball. His poor form from the Ashes continues, but there is still time left for Trott to change that before the return Ashes.

Joe Root opened the face of the bat and tried guiding an incoming delivery from Faulkner to third-man, but missed and the ball hit the middle stump. But overall did not look comfortable with the bat as he crawled to a 15-ball three. Earlier with the ball, he gave away 13 runs in two overs. He will have better days. He did take a simple catch at long-on to dismiss Finch.

There were a lot of noises as the England team sheet was announced, but Eoin Morgan will admit that Australia were the better team on the day. The England captain tried to do his best on the field, but it just did not work out. Morgan did, however, make amends with the bat. His 69-ball 54 saved England from losing by a greater margin. He struck four fours in his innings. Morgan top-edged an attempted flick over long-on off a full delivery outside off-stump to Clarke at cover.

Jos Buttler came in when England had lost half their side, but gave them the impetus later in the innings that took their score to a slightly better total. His 65-ball 75 knock was the best any England batsman could do with the bat. Buttler was also reliable behind the stumps as he took three catches during Australia’s innings. His efforts though went in vain as Australia won by 88 runs.

Ben Stokes had a poor match as he first conceded 66 runs in his 10 runs and then was dismissed for five off seven balls pulling McKay’s slower ball straight to deep square-leg.

In the absence of Graeme Swann, England’s hopes in the spin bowling department fall invariably on James Tredwell. But on Sunday, the right-arm off-spinner was off the boil. The Australian batsmen targeted Tredwell and scored a lot of runs. He gave away 60 runs in eight overs. The consolation for him was that he got the wicket of Finch.

England’s fast bowling spearhead for the series looked impressive and yet was also expensive. Steven Finn picked up two wickets. First he got the wicket of Marsh and then Faulkner. But the tall fast bowler gave away 68 runs in his 10 overs. Finn scored 16 runs off 23 balls in England’s innings.

Irish import Boyd Rankin was England’s best bowler on the day. He got the wickets of Clarke and Wade. He only conceded 49 runs in his full quota of overs. He bowled fast and troubled batsmen with his height. 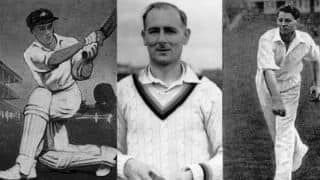