Australia beat England by 49 runs in the fifth One-Day International (ODI) in Southampton to clinch the series 2-1. Shane Watson’s brilliant knock of 143 off 107 balls set England a 299-run target. England were bowled out for 249 despite the efforts of Ravi Bopara (62). Shrikant Shankar analyses each player’s performance at The Rose Bowl. Australia beat England by 49 runs in the fifth One-Day International (ODI) in Southampton to clinch the series 2-1. Shane Watson’s brilliant knock of 143 off 107 balls set England a 299-run target. England were bowled out for 249 despite the efforts of Ravi Bopara (62). Shrikant Shankar analyses each player’s performance at The Rose Bowl.

Australia (According to batting order)

Phil Hughes replaced the out-of-form Shaun Marsh in the Australian batting line-up, but he couldn’t muster up a good score. He was dismissed for just two runs by debutant Chris Jordan. He top-edged a pull and was caught by Michael Carberry at mid-wicket.

When Aaron Finch broke all sorts of records in the first Twenty20 International, much was expected of him in the remainder of the series. But it has not been a great rest of the tour for him. He only managed 26 off 32 balls. Finch hit a Ben Stokes delivery straight to Eoin Morgan at covers. Finch hit the first ball after the rain interruption away from the body. What if he would have got his eye in? But that’s the way he plays.

Shane Watson ended the Ashes 2013 series with an extraordinary 176. He ended the One-Day International (ODI) series with an astonishing 143. He only took 107 deliveries to get these runs. Watson struck 12 fours and six sixes. En route to his eighth ODI century, Watson also became the 14th Australian to reach 5,000 runs in ODIs. He also got the wicket of Jordan in the England innings. There was no doubt who the Man of the Match was going to be. A near perfect performance from the all-rounder.

The Australian wicketkeeper was promoted up the order so that he could get some runs. But Matthew Wade was dismissed for a first-ball duck. He fell on the next ball after Finch was dismissed. Wade gloved a Stokes bouncer to Jos Buttler behind the wickets on the leg side. He did affect a stumping to dismiss Eoin Morgan.

Michael Clarke proved his worth yet again with a timely knock of 75 off 76 balls. He put together a 163-run stand with Watson for the fourth wicket to guide Australia to an eventual total of 298 all out. The Australian captain would have been delighted to end the long tour of England with a series win. He was also the Man of the Series as he scored a total of 202 runs in three innings.

It didn’t quite work out for the Australian vice-captain this time around. George Bailey missed a sweep shot and was stumped by Buttler as his back foot trod forward a bit. In the process, Joe Root got a wicket. He was dismissed for four. Bailey should be satisfied after a good series on a personal level.

Adam Voges also did not impress with the bat this time around. He pushed at a length delivery from Stokes and edged it to Buttler behind the wickets, who took a splendid diving catch to his right. Voges also took the wicket of Morgan.

The left-arm seamer was the pick of the Australian bowlers as he took three wickets for 38 runs. James Faulkner got the wickets of Carberry, Buttler and Stokes to help Australia win the match by 49 runs. He also got 10 runs while batting.

England fans’ pantomime villain had a very good last match for Australia. Mitchell Johnson bowled with a lot of pace and troubled all the English batsmen he bowled to. The left-arm fast bowler got two wickets — Root and Ravi Bopara — to dent England’s chances.

The hat-trick hero from the fourth ODI had a highly poor match with the ball. Clint McKay went wicket-less in nine overs and gave away 54 runs.

The leg-spinner was again expensive, but got the wicket of Boyd Rankin. It has been a testing time for Fawad Ahmed with the England batsmen targeting him on the field and the Australians lambasting him for off field issues. He has come through with a few wickets and a series win, so, he should only get better. 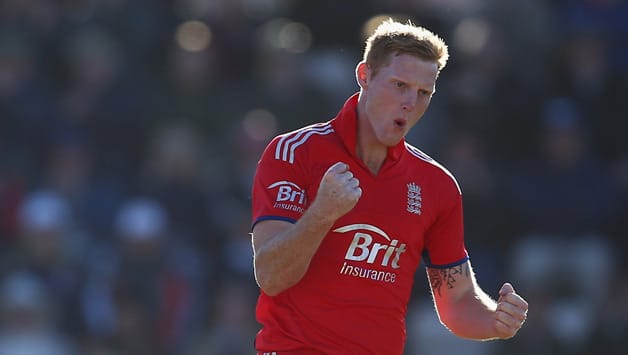 
England (According to batting order)

Carberry came into the series with a lot of runs in the domestic circuit in the past season. He started out poorly, but got more confidence as the series went along. The left-hander scored 30 on Monday, but was dismissed by Faulkner leg-before.

Kevin Pietersen was run-out for a duck. That sort of unsettled the England team right at the beginning. The flamboyant right-hander had a disappointing series scoring only 71 runs in four innings.

Root looked a bit out of sorts in the middle. He scored 21 runs off26 balls before being bowled by Johnson. Root got a thick inside edge while driving a full and wide delivery from Johnson and the ball struck the stumps. Root did get a wicket while bowling.

The England captain would not have enjoyed a series defeat to Australia, but he was left with a weakened squad and they only lost two matches. Morgan scored 30 off 39 balls before being stumped by Wade off the Voges’ bowling.

Luke Wright came into the side to replace Jonathan Trott who has had a poor series — recording two first-ball ducks. But he too could not do much in the match. Wright was run-out for a duck.

Although he went wicket-less while bowling, Bopara was England’s best batsman on the day. He scored a quick 62 off 66 balls hitting five fours. He hit a length delivery from Johnson straight to Voges at cover.

Jos Buttler has had an extraordinary series. In the fifth ODI he scored 42 off 37 balls. Buttler also took four catches and affected a stumping during the Australian innings.

Stokes was expensive as he gave 61 runs in 10 overs, but took five wickets as well. It was clear that the Australian batsmen targeted Stokes, but the right-arm pacer still had enough to get his first five-wicket haul. He also scored 27 runs off 25 balls from lower down the order.

The debutant was impressive with the ball. Jordan took three wickets for 51 runs. He also scored 14 runs off 25 balls.

James Tredwell had a very poor series by his own standards. The right-arm off-spinner was very expensive as he gave away 38 runs in four overs and went wicket-less. Tredwell only got four wickets in three bowling innings.

Rankin was very economical again. The burly right-arm fast bowler took the wicket of McKay, but conceded only 26 runs.