Basil D’Oliveira’s remarkable 158 in the first innings had queered the pitch even more than the freak storm which had hit the ground.

August 1968. Amidst the controversy and uproar surrounding Basil D’Oliveira and the tour to South Africa, there were small subtle sub-plots played out in the MCC offices, which were not as incendiary. Arunabha Sengupta writes about the ducklings and goslings that dominated quite a lot of the correspondence at Lord’s.

Those were days of trials and tribulations for MCC. England had won against the weather and the Australian team at The Oval, aided by Derek Underwood’s unplayable deliveries on a sticky wicket and many spectators who had jumped over the fence to make the ground fit for play. But Basil D’Oliveira’s remarkable 158 in the first innings had queered the pitch even more than the freak storm which had left the ground submerged.

The objective was to pick the team to tour South Africa that winter, but the decision making parameters were far from cricketing. Balthazar Johannes Vorster, Prime Minister of South Africa, had made it clear that a side including the cape-coloured D’Oliveira would not be welcome to the country. Also influencing the decision was Alec Douglas-Home, former Prime Minister of Britain, the only one among those who held the office to play First-Class cricket, and a recent MCC President. Douglas-Home, then the Opposition spokesman for foreign affairs, had raised the question of D’Oliveira during a meeting with Vorster while on a tour of Rhodesia and South Africa; and on his return had done enough to confuse, contradict and muddle the affairs with his advice.

In the end, when the squad was made public after the meeting of August 27, D’Oliveira was not in it. As expected, this raised a huge uproar, with many prominent cricketers voicing their protest.

The subsequent developments, with D’Oliveira’s re-inclusion and the ultimate cancellation of the tour, have been documented often enough. For our purpose it suffices to say that at the end of the Oval Test, MCC were juggling hot potatoes. As umpire Charlie Elliott had exclaimed when D’Oliveira had dabbed a ball from John Gleeson down the leg side to get his hundred, “Oh Christ, you’ve put the cat among the pigeons now.”

Yet, looking into the MCC archives, one discovers that harassed pigeons were not the only birds in consideration. There were others, and, at least for MCC, of the happier variety.

A month earlier, a letter from Charles Ekberg of Humber Public Relations had reached the office of MCC Secretary Billy Griffith. Writing on behalf of his client Mr Joseph Nickerson of Rothwell, Lincoln, Mr Ekberg communicated the desire to present a gift of 12 ducklings and a gosling to the best bowler of each side in the Oval Test.

In response, Griffith wrote that 12 ducklings and a gosling would doubtless be extremely acceptable to the bowler in the England side lucky enough to receive them. The MCC Secretary also added that he would be passing on the offer to Mr RJ Parrish, manager of the Australian side, and he had little doubt that he would accept it with gratitude.

At The Oval, there was no doubt about the deserving candidate from the England side. Underwood with match-winning figures of 9 for 139 was way above the rest. For the Australians, it was not so streamlined, but Alan Connolly, with match figures of 6 for 192, was slightly ahead of Ashley Mallett’s 5 for 164. Hence, on the day after the conclusion of the Test match, a new letter from Mr Ekberg reached Griffith.

I think Underwood and Connolly turned in the best bowling analyses in the last Test and perhaps you will let me know whether they will be prepared enough to accept the ducklings offered by Mr Nickerson for outstanding bowling performances. I will then make arrangements to have these dispatched.

We shall have to have Mr Underwood’s address so he can receive a bird every month and a gosling at Christmas, but I anticipate some difficulty with the Australian gentleman because of restrictions on poultry entering that country. Perhaps he would like to take the whole prize at once while in England and have a glorious duck beano, or he may feel inclined to donate them to some worthy cause.”

When Griffith confirmed that the choices of the cricketers were indeed correct and the birds could be presented, Ekberg asked for the addresses and other arrangements. The letter demonstrates how much the D’Oliveira incident had shaken up the establishment by then.

Thank you for your letter. Can you give me the addresses to write to the players asking them where we should send the ducks?

I was awfully sorry to see the D’Oliveira controversy. I think the MCC has, though not many people will see it this way at the moment, acted in the best interests of the player and international sport in general.

A letter from Griffith followed, detailing the particulars of delivery.

“I fully support your selection of Derek Underwood and Alan Connolly as the best bowlers for England and Australia during the Final Test Match.

We have made contact with both these players and they are delighted to accept the generous offer of 12 duckling and a gosling.

Derek Underwood would like his sent to him at his home address:

He will of course be in South Africa for most of the winter, but he would like his family to receive the birds.

Alan Connolly is coming back here next summer to play for Middlesex, and he will probably bringing his wife and family with him. He is wondering whether you would be prepared to defer the presentation until he returns in April, and you could then discuss with him how best to deal with the matter. A number of the Australian players are leaving for home early next week, and Alan feels that it is rather too late to organise a big duck beano.

It must have been rather a relief for MCC to deal with ducklings and goslings rather than Vorster and apartheid. As things turned out, Underwood did not manage to spend the winter in South Africa, but then, he probably had a gosling and several ducklings to make up for it. 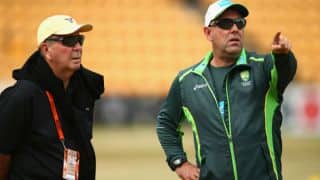