Although it was a combined effort from the English bowling attack, it was Jordan, who received the highest acclaim for his terrific spell of 3 for 31.

Following a commendable performance in the opening two games, hosts England had the final laugh as they beat visitors South Africa convincingly by 13 runs in the third and final Twenty20 International (T20I) at the Sophia Gardens in Cardiff on Sunday. With this win, England clinched the series 2-1. In what was a high-scoring game, England managed to post a heavy total of 181 for the loss of 8 wickets, courtesy debutant Dawid Malan s 78, while in reply South Africa got limited to 162 for the loss of 7 wickets, courtesy Chris Jordan s 3 for 31. Let us have a look at the highlights the match produced. FULL CRICKET SCORECARD: England vs South Africa 2017, 3rd T20I at Cardiff

Dawid Malan s fiery 78: There have been numerous instances where players have impressed in their debut innings. Although it has hardly been seen in T20Is, it was one of those moments when England s top-order batsman Dawid Malan excelled with a fiery innings of 78 from 44 deliveries, including 12 fours and a couple of sixes, with a strike rate of 177. He also became the debutant with the maximum score for England in T20Is, as it was surely his innings, which propelled England towards the match-winning total of 181.

Alex Hales-Dawid Malan s splendid stand of 105: The English innings hardly had any partnerships, apart from the one which the pair of opener Alex Hales and Malan contributed. It was a splendid stand of 105 runs for the second wicket, as Hales contributed 32, while Malan contributed 70 runs in the stand. It was this very pair, which gave England the edge and the platform for a match-winning total. During this very stand, Malan also scored his maiden T20I half-century.

Dane Paterson s subtle spell of 4 for 32: In an otherwise dull day with the ball for the South Africans, it was Dane Paterson, who had his day out as he managed to claim 4 for 32. Despite his heroic spell being subdued by England s healthy total, he was undoubtedly the star of the South African bowling attack on Sunday, or the possibility of a bigger margin of defeat could well have been on the cards. Paterson claimed the all-important wickets of stand-in skipper Jos Buttler (31), Sam Billings (12), Liam Livingstone (0) and David Willey (1).

JJ Smuts-AB de Villiers s delicate stand of 37: South Africa, despite being off to a shaky start, hardly had anything to worry about, as it was the pair of opener JJ Smuts and skipper AB de Villiers, who together, put up a delicate stand of 37 runs for the third wicket, which allowed South Africa to recover from the two early losses and set up a clear way in pursuit of the chase, but to lose in the end. While Smuts contributed 22, de Villiers contributed 15 runs in the stand.

AB de Villiers s restrained knock of 35: The skipper never fails to fire, and for the third game in a row, he was in the scoring list as he scored a restrained knock of 35 off 19 deliveries, including a couple of fours and sixes, along with a strike rate of 184. He was also involved in the delicate 37-run stand along with Smuts, which made things easier for South Africa in the chase. However, his joy was short lived, as the other batsmen could hardly do anything to chase the heavy total down, while he could not last long until the end to see his team home.

Mangaliso Mosehle-Andile Phehlukwauo s late fightback: South Africa s hopes of winning the match were bolstered tremendously when the pair of Mosehle and Andile Phehlukwayo provided some strong fightback to the English bowlers and kept the hope alive for South Africa with an outside chance. Both these men put up a superb 57-run stand for the seventh wicket, followed by some powerful hitting from Masehle. However, the pair could not last until the end, while it was too late for South Africa to clinch a win. While Mosehle contributed 34, Phehlukwayo contributed 16 runs in the partnership.

Chris Jordan s terrific spell of 3 for 31: Although it was a combined effort from the English bowling attack, it was Jordan, who received the highest acclaim for his terrific spell of 3 for 31, which included the important wickets of Chris Morris (8), David Miller (7) and Farhaan Behardien (3). The importance of these wickets is clearly mentioned in their name itself, for if either of these batsmen would have gone going, England could have been in serious trouble. 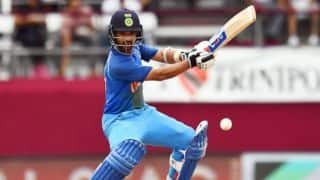