In CricketCountry s episode called Marks out of 10, let us rate Joe Root and co. on the basis of their performances.

England won the three-Test series 2-1, continuing to make merry at home. West Indies, however, have not won a series on the English soil since 1988. Although they scripted a spectacular comeback when they won the second Test, they succumbed to James Anderson s swing bowling at Lord s and giving away the deciding contest by 9 wickets.

In CricketCountry s episode called Marks out of 10, let us rate Joe Root and co. on the basis of their performances.

Alastair Cook (7/10 |304 runs at 60.80): As many as 25 catches were dropped in the series, and Cook has 4 of them against his name. Known as a fine slip fielder, Cook had a tough time holding onto catches this summer. However, his 243 in England s first ever day-night Test gives him a reprieve. Playing under lights and with the pink ball, Cook remarkably applied himself, setting up a win in the opening Test.

Mark Stoneman (3/10 |120 runs at 30): Cook has had 12 openers since Andrew Straus hung his boots. They came and they went, leaving Cook stranded. Then came Stoneman. He looked technically solid, but yet could not fulfil the trust poured on him. More importantly, he failed to convert his starts into significant innings. He could have made amends with his solitary fifty, but the West Indian pacers were too phenomenal this series. That being said, he ended the series on a high, scoring an unbeaten, attractive 40 to help his team chase a mere 107 runs.

Joe Root (8/10 |268 runs at 67): Root and consistency walk hand in hand. The charming captain scored a century and two fifties. Above all, his application when England found themselves in the woods was top-class. For his captaincy (including his bold declaration at Headingley), the young lad gets full marks. It is not a walk in the park to call the shots for a team that boasts of talismanic players.

Tom Westley (1/10 |71 runs at 17.7): Thanks to his unbeaten 44 at Lord s that inflated his average. He was mediocre otherwise, in the middle-order. If he is to cement his place in a star-studded line-up, he will have to show character in the 2017 Ashes (if at all the selectors ponder over his selection).

David Malan (4/10 |154 runs at 38.5): Another newcomer who could not live up to the expectations. Nonetheless, he was good at parts with two fine half-centuries. Like Stoneman, probably something to smile about.

Ben Stokes (10/10 |228 runs at 57 and 9 wickets at 22.2): He could not put a foot wrong. Handy with the ball and skilful with the bat, Stokes was the star performer of the series. His hundred in the second Test saved England from the defeat turning into an embarrassing one. He did so in the Lord s Test as well, with a fine 60 that garnered his team a vital 22-run lead.

6 of his 9 wickets came at Lord s, as he became only the eighth player to register his name on both Lord s honours board.

Jonny Bairstow (5/10 |59 runs at 14.7, 9 catches, and 2 stumpings): He was off-colour with the bat. Every time the batting team slumped, Bairstow was unfortunately a part of the cascade. However, he was exceedingly impressive with the gloves. With the English pacers swinging the ball both bays, he was being careful and made sure does not produce any glitches, adding nothing to the infamous list of dropped catches. He gets an extra point for often mindlessly running to the third-man boundary every time the ball was manoeuvred there.

Moeen Ali (6/10 |109 runs at 27.2 and 5 wickets at 49): Moeen was not needed with the ball. The pacers took care of that, but when given an opportunity, he did not let his captain down. He, though, could have done better with the bat. He had a solitary, but highly impressive, fifty under his name.

James Anderson (10/10 |19 wickets at 14.10): No team could have survived his spell in the second innings at Lord s. It all started with the wicket No. 500, the one that made him the only Englishman to achieve the feat. Kraigg Braithwaite was not ready for the incoming delivery, and history beckoned.

Anderson then went on to take 6 more wickets, ending with career-best figures of 7 for 42.

Stuart Broad (6/10 |9 wickets 36.22): He deserved more wickets. He was frustrated at one point. West Indies batsmen, too, were bored of missing the edges. He gets extra points for scoring a crucial 38 runs at Lord s, propelling a lead over West Indies.

Toby Roland-Jones (7/10 |7 wickets at 16): He was unfortunate to have bowled alongside Anderson. However, he was dropped in the second Test, giving up his place for the all-rounder Chris Woakes. He made a comeback when his replacement could not weave a magic either. When he did, he scalped important wickets, providing breakthroughs.

Chris Woakes (3/10 |2 wickets at 61 and 84 runs at 84): He gets all 3 points for his remarkable 61* in the second innings of Trent Bridge test. However, he was picked up for his seam-bowling, which looked lacklustre. 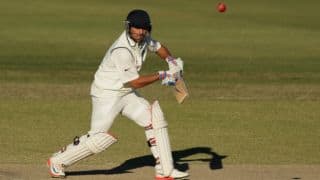