Playing a Test is not a bad idea, organising one just for sake of it would be bad for Ind.

The Indian women take on their English counterparts for a one-off Test match starting on August 13. This will be the first Test which the Indian women will play since 2006. Their last  Test was against England as well. Shiamak Unwalla wonders whether having a one-off contest is actually worth it.

During the last ICC Women’s World Cup in 2013, which was incidentally held in India, there was a brief rise in curiosity for the women’s game. Unfortunately, India did not perform very well, and the interest again tapered off.

One of the reasons India did not do well in the World Cup was due to the fact that they had played cricket quite sparingly in the months leading up to it. The administrators may be blamed for ignoring the women’s game, but it is unfortunately true that there is not a lot of interest in the female version of the sport in India.

That the Indian women are even playing a Test in England is a step forward. The way things stand at the moment, it could well be that the two boards decided to cash in on the trend of the current Test series between the men’s teams. While that in itself is not a bad idea, doing so only for the sake of holding a match would be detrimental for India.

The Indian women’s team have been eager to get back to playing the longest format of the game. It has been a grievance of a number of the seniors that they have played absolutely no Test cricket. Besides that, the third ODI will be played at Lord’s — the home of cricket — whereas the one-off Test will be played at  Wormsley Park.

“Where,” you ask? It has hosted just one Test to date, during the last year’s Women’s Ashes. The match ended in a draw, and the ground has not been used since. That says a lot about how each board views the sport. It seems, quite sadly, that this is an attempt made by the Indian board to appease the team for a short while. However, it remains to be seen whether this will be a once-in-eight-years’ contest.

The Indian women’s team have a lot to offer. Mithali Raj and Jhulan Goswami have been two of the leading women cricketers in the world for years now; in fact they have been members of the national side for far longer than the likes of Virat Kohli, Cheteshwar Pujara, and Ajinkya Rahane have been for the men’s side.

One can only hope that this is the start of a new phase in women’s cricket for India. If they give a good account of themselves — and at this point even a respectable draw would be a better result than what their male counterparts have achieved — it could kick-start a new era for the women’s version of the game in India, and that is a very encouraging prospect indeed. 30 things you need to know about Shoaib Akhtar 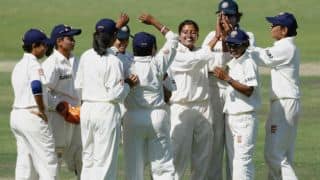