England finally bounce back with a victory over India after a tough year.

England retained the Ashes for the third consecutive time when they smashed Australia 3-1 in the series played in the Old Blighty last year. The final Test at The Oval had ended in a draw despite a struggling Australian side putting up a good fight. Devarchit Varma recaps how the subsequent year unfolded for the former No 1 ranked Test side and the challenges that lie ahead.

Shane Watson and Steven Smith had cracked impressive centuries. With the ball, James Faulkner, Mitchell Starc and Ryan Harris made their mark but it was not enough. Australia were fighting for respect in the final Test at The Oval and England denied them a win in the Ashes 2013, thus retaining the urn for the third consecutive time, proving once again that the arch rivals had a huge chasm when compared together.

Australians were not going anywhere with far too many questions being asked about the players and Darren Lehmann only taking over as the coach a fortnight before the start of the series. On the other hand, English cricket was in an unchallenged territory, and making huge progress as far as their game was concerned.

The return Ashes — as they called it — Down Under was again expected to be a one-sided affair. It was reckoned that Australia needed at least a couple of seasons to get back on their feet but what transpired took the cricket fraternity by surprise. Australia pummelled England 5-0, putting up a show that they were capable of, but were not able to do for a very long period of time. For England, so meticulously prepared that they dished out an 82-page list of food catering demands, it was nothing short of a nightmare, a disaster.

The wheels started coming off only after the opening Test, when Jonathan Trott flew home and then England kept misfiring in all departments. Kevin Pietersen the maverick remained ‘irresponsible’, Alastair Cook was haunted by Mitchell Johnson’s pace and Ian Bell was denied his favourite late cuts. The ‘daddy hundreds’ dried up. James Anderson and Stuart Broad looked nothing more than bowling machines and the mid-series retirement of Graeme Swann depleted the bowling attack severely.

Australia kept hitting England and the tourists lost everything that they had. No side in international cricket — barring India in overseas Tests — has looked so botched up in the recent past as England did. The tremors were felt deep within the English cricket setup, and the ‘preventive’ and ‘necessary’ measures were taken. Immediately, Pietersen was sacked unceremoniously and so was the Andy Flower. The English media said Flower was indeed the man to lead England’s recovery, but the change was needed to bring in fresh ideas.

The Ashes debacle was followed by a 1-4 defeat in five-match One-Day International (ODI) series . The T20Is too had the same story, with England losing 0-3. England had not lost so miserably in the past couple of years, if the humiliation in the United Arab Emirates (UAE) by Pakistan in 2012 is kept aside.

The battered side flew to the Caribbean to take on a misfiring West Indies side and won 2-1. There was still no coach, and it was only in mid April 2014 that Peter Moores was handed the responsibility. The ICC World T20 2014 was a yet another a poor outing as the 2010 champions were out of the tournament without much success.

England began their home season with a bilateral series against a side that had till then won everything that came their way. A rampaging Sri Lankan side added more to England’s misery by winning all — ODIs, T20Is and Test series — which prompted the fans and media to demand sweeping changes in the side.

Amid this tornado, Alastair Cook remained adamant that he was the best man to lead England and their recovery. Bell hung around, and so did the other seniors. England drafted in the likes of Moeen Ali and Gary Ballance to strengthen their batting. Joe Root always had success while playing at home. In came India.

The first of the five-Test series was a draw, but England plunged to another low when India trumped them by 95 runs at Lord’s. England’s situation worsened. And then the contest shifted to Southampton, and Ravindra Jadeja dropped a woefully struggling Alastair Cook in slips on the first day. The rest, as they say, is history. England got one chance to capitalise and combined with India’s pathetic attitude and efforts, they won as many as three Test matches on a trot. The slide not only addressed the slump but has also helped the senior players to attain respect and their places in the national side.

England may have lost their key players but the current lot has shown that they can be as good as anyone on the international circuit. The absence of Trott and Pietersen doesn’t seem to be affecting much when Ballance and Root get those hundreds. The void created by Swann’s retirement was more than fulfilled by Moeen’s spin, which outdid the Indian batsmen on many an occasion.

Whether England have really ended their poor run is only time will tell, given the fact that they have generally struggled in ICC tournaments. World Cup 2015 is only few months away and it will also be interesting to see how England take on the Australian pace battery next year in the Ashes. But for the time being, Cook, the adamant-yet-determined English captain remains at the helm, having led his side out of the storm somehow. 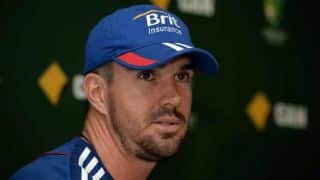 Daniel Vettori to miss CLT20 2014 due to personal reasons