Eoin Morgan's ability to change the pace of an innings is a hallmark of a fine ODI batsman.

Even though, James Faulkner with his amazing pyrotechnics pulled off a stunning win for Australia to hammer another nail in England‘s coffin in the second One-Day International (ODI) at Brisbane, Eoin Morgan gave the English team something to cheer about with a sublime century. The left-handed batsman wielded the willow like a magic wand to find the minutest of gaps with chronometric precision. When needed, he essayed some crackerjack shots to keep the scoreboard ticking as well. In the end, it turned out to be a valiant effort from Morgan to lift the spirits of the team.

In many ways, Morgan’s century re-defined perfection in terms of batsmanship. He took his time to gauge the nature of the pitch and the bowling in the opposition ranks, before cutting loose. The first shot of intent came when with a little shimmy down the track, he cracked a sparkling six off Clint McKay‘s bowling straight down the ground.

However, it was only after the basher and dasher Jos Buttler joined him in the middle, did Morgan truly open up his shoulders to make merry against the Australian seamers. He especially took a heavy toll on the eventual hero of the match — Faulkner. He thwacked him over the long-on, long-off and mid-wicket regions for towering sixes. The massive swipe over mid-wicket region off Faulkner’s bowling was one of the shots of the day.

He had the chutzpah to thump Mitchell Johnson in rip-roaring form over covers for his umpteenth six. It takes some skill to send it soaring into the orbit over covers for a six. Actually, he left Australian bowlers in a state of trance by playing shots in a 360-degree arc. One must have close to preternatural hand-eye co-ordination to do that. He even took the mickey out of the bowlers many times by playing cheeky shots with the deftest of touches. A hallmark of a very good ODI batsman!

In fact, he seems to have a map of the field fitted in his brain. Morgan finally reached the coveted three-figure mark by nonchalantly helping a length delivery from McKay over wicketkeeper Brad Haddin‘s head for a boundary.

Unfortunately for Morgan, his prestidigitation with the willow wasn’t good enough, as Faulkner stole the thunder from him with a remarkable houdini act to take Australia to a nerve-wracking win. It seems like during England’s 2013-14 tour of Australia, there won’t be any light at the end of a very long tunnel for the beleaguered English setup. Morgan though, again showed that when allowed to play with a dash of freedom, in the shorter versions of the game, he is up there with the best in the business. 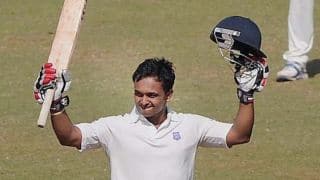