From tally of 67 off 5-ODIs to a match-winning knock of 125 in only T20I, it was a magnificent turnaround for West Indies' Evin Lewis.

Was it some other mediocre left-hander who had put on an Evin Lewis mask during the ODIs? If not, it has to be one of the finest turnarounds. Evaluating his performance in the ODIs against India, I rated him 1 out of 10. What else would you expect? He had scored 67 off 121, in 5 ODIs. He made amends with an unbeaten 62-ball 125, helping West Indies clinch the one-off T20I at Sabina Park in Kingston, Jamaica.

Chasing 191, West Indies were 17 for 0 from 3 overs. The spotlight was on the local boy. Superstar Chris Gayle returned to the side after 15-month hiatus. Thereon, it was a Trinidadian who owned this Jamaican party. Lewis outshone Gayle and other Caribbean luminaries.

Less than a year back, at Florida, he had clobbered Stuart Binny for 5 consecutive sixes. He registered his first T20I ton and West Indies won the thriller by a run. In what seemed like an extension of that innings, Lewis belted his second T20I, against the same unsuspecting opponents. In doing so, he not only helped West Indies triumph but also registered plethora of records.

Joining the legends: If one has to name the finest T20 batters of all time, Gayle and Brendon McCullum will probably feature at the top of the list. For long, these two gentlemen were the only ones to have put up 2 T20I centuries. Lewis, in his 13-T20I career, joined this elite club.

The unique feat: This was only the 26th T20I century. Lewis became the only batsman in this format to score more than 1 century against the same opponent. The ardent followers of Indian cricket in the 90s surely re-visited the scars that a certain Sanath Jayasuriya had once inflicted.

Highest score against India: A slog sweep from Lewis off Ravindra Jadeja fetched Lewis another six and sealed the West Indian win. That took him to 125, the highest score registered against the Indians. The previous best against India was Shane Watson’s 124 at Sydney in early 2016.

The West Indian record: Rewind to the opener of the inaugural World T20 in 2007. Gayle lit up Johannesburg with his 117. For almost 10 years that remained the highest score by a West Indian in T20Is. Lewis is the proud owner of this record now.

Eclipsing Gayle, again: Gayle’s 11 sixes against England in 2016 World T20 group game was the highest maximums registered by a West Indian in T20Is. Lewis struck 12 sixes on Sunday. This is also the third-most sixes struck in a T20I innings. Aaron Finch’s 14 against England en route to 156 tops the list followed by Richard Levi’s 13.

Most sixes against India: Eoin Morgan has taken 8 innings to belt his 17 sixes in T20Is against India. Watson was the proud topper of the list. He had struck 20 sixes in 8 innings. Lewis has 21 and it has taken him 3 innings! His 12 sixes here is also the most number of sixes registered in an innings against India.

The ‘6 minus 4’ difference: Cricket statistician Umang Pabari comes with a fascinating stat about Lewis. The Caribbean opener has now struck 20 fours and 37 sixes in T20Is, which is unusual. This ‘6 minus 4’ difference stands at 17, which is the most for any player. The list is followed by South Africa’s Albie Morkel (10) and Bangladesh’s Ziaur Rahman (7)

Suvajit Mustafi consumes cricket for lunch, fiction for dinner and munches numerous other snacks throughout the day. Yes, a jack of several trades, all Suvajit dreamt of was being India’s World Cup winning skipper but ended up being a sports writer, author, screenwriter, director, copywriter, graphic designer, sports marketer, strategist, entrepreneur, philosopher and traveller. Donning so many hats, it’s cricket which gives him the ultimate high and where he finds solace. He can be followed at @RibsGully [Twitter] and rivu7 [Facebook].
First Published on July 10, 2017 11:45 AM IST
Last updated on July 10, 2017 12:01 PM IST
TOPICS:
Chronicles Evin Lewis India India tour of West Indies 2017 India vs West Indies lists MS Dhoni's statistical highlights West Indies 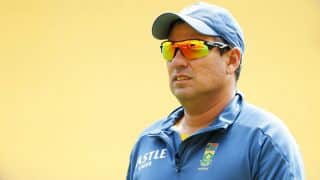